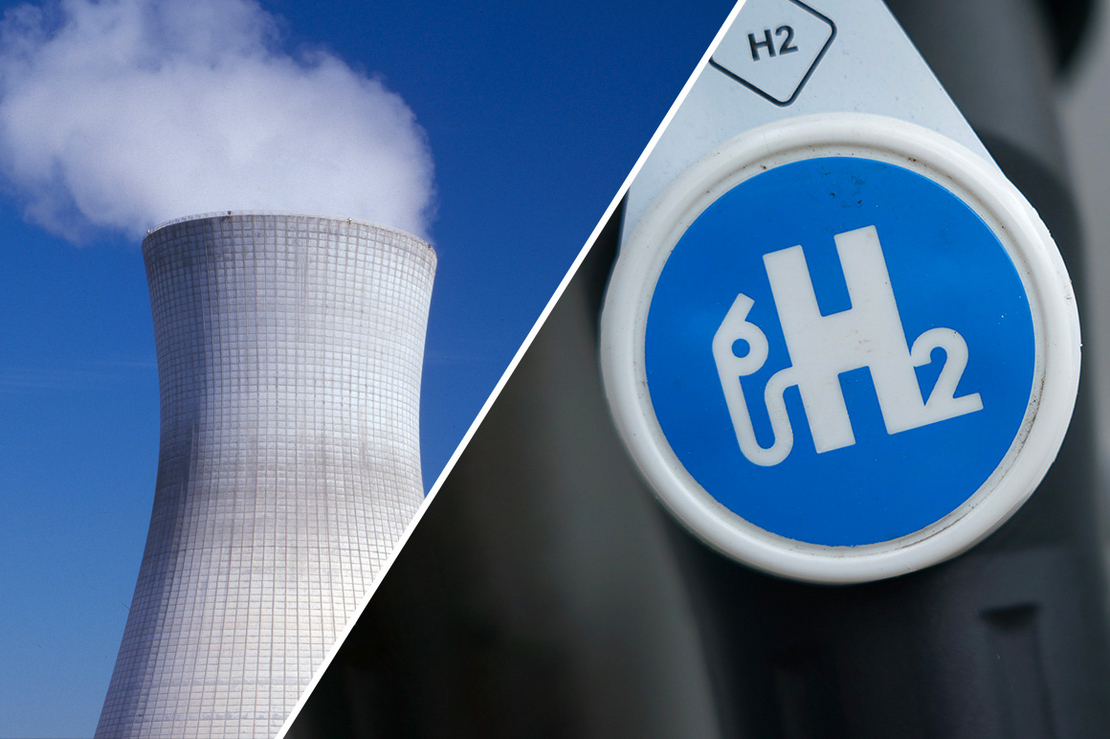 The nuclear industry and hydrogen companies are forming a new coalition dedicated to collaboration between the two energy sources, even as the likely collapse of Congress’ climate package is creating new doubts about “clean” hydrogen’s future.

Known as the Nuclear Hydrogen Initiative, the 40-member coalition said yesterday it would develop and promote new policies that support hydrogen made with nuclear electricity.

That technological pairing has largely been overlooked in discussions over low-carbon hydrogen’s potential as a tool for cutting emissions.

Yet nuclear hydrogen could soon receive billions in Energy Department support as part of a program funded by the $8 billion infrastructure law. At least one of four hydrogen hubs backed by that law must incorporate nuclear energy.

In addition to sharing information with policymakers, the new initiative will also encourage partnerships with buyers of nuclear hydrogen, engage financiers, and facilitate research and development activities, although it will not engage in lobbying, according to spokespeople.

“This is an opportunity to bring together these two industries that have the potential to catalyze decarbonization at the scale and the speed this really needs to have,” said Elina Teplinsky, lead spokesperson for NHI and a partner at Pillsbury Winthrop Shaw Pittman LLP.

Most of the attention paid to hydrogen as of late, from investors and policymakers, has revolved around “green” or renewable hydrogen, which uses wind and solar electricity to separate hydrogen from water molecules, or “blue” hydrogen, which pairs the traditional natural gas-based process with carbon capture.

The initiative says that nuclear hydrogen could sit comfortably alongside those methods and notes that nuclear plants could deliver zero-carbon energy for hydrogen production around the clock.

The plants might also be able to create hydrogen more efficiently than renewables through a novel, high-temperature process that incorporates steam made at the plants, the group says.

In the process, the country’s existing fleet of nuclear plants could find a new source of revenue that would keep them online, according to the initiative.

If the U.S. wants to meet its climate goals, “it’s going to be critical to have these assets stay online and have license extensions,” said Colleen Wright, vice president of corporate strategy at Constellation, the U.S.’s biggest operator of nuclear plants.

“One of the really interesting pieces of this [initiative] is supporting the economic viability of nuclear plants, long term,” she said.

Nuclear hydrogen’s relative obscurity, however, may have allowed it to escape scrutiny from environmentalists who have pilloried any form of hydrogen derived from fossil fuels. That may change, considering reactions yesterday

“The nuclear industry is taking a page out of the fossil fuel industry playbook, greenwashing dirty energy in hopes of securing massive government handouts that will lock in more dirty energy infrastructure,” said Jim Walsh, policy director at Food & Water Watch, in a statement that also criticized what he called a lack of meaningful federal oversight of the nuclear industry. He said there is no real solution to “massive amounts of radioactive waste.”

In the space of a few years, low-carbon hydrogen has entered the mainstream of climate policy, getting backing in both political parties.

Yet the recent dissolution of climate legislation in Congress may have taken some steam out of hydrogen’s rapid advance, say advocates.

One mainstay of legislative negotiations between Sen. Joe Manchin (D-W.Va.) and other Democrats was a production tax credit (PTC) modeled after the tax credits that have propelled wind and solar’s rise in the U.S. Many hydrogen supporters say the same would happen for low-carbon varieties of hydrogen.

One policy brief by clean energy group RMI, for instance, estimated that by 2030, the tax credit alone could bring online an amount of “clean” hydrogen equal to half of what the U.S. produces in “dirty” hydrogen per year.

“We were all hoping to have the hydrogen PTC, because it would resolve most of the issues we have,” said Teplinsky. “In the absence of that, it basically will have to be puzzle pieces adding up to the big incentive.”

The credit that had been under consideration was “technology-neutral” and pegged to the carbon intensity of the hydrogen and the year in which it was deployed, with the permissible carbon footprint declining over time. Nuclear power, renewables and natural gas with carbon capture would all have been considered equally eligible, provided they could meet the CO2 limits.

The design attracted lobbyists from multiple industries, including the American Gas Association, Edison Electric Institute, American Clean Power Association — which represents wind and solar developers — and several of the nation’s biggest utilities and oil majors, according to federal disclosures.

Without the tax credit, the Energy Department’s $8 billion hydrogen hub program, which is slated to open for formal proposals in the fall, could end up being squandered without additional policy support, suggested Jesse Jenkins, a Princeton University professor. In a Twitter thread last week, he urged Manchin to “change his mind” and return to negotiations.

“[T]he H2 hubs are a bridge to nowhere without the early market support policies in the energy package!” wrote Jenkins, who named both the hydrogen PTC along with a separate credit for “blue” hydrogen’s carbon capture systems.

Without those, “there is NO COMMERCIAL FUTURE for clean H2,” Jenkins wrote.

Still, the technology-neutral design of the hydrogen credits has drawn criticism from some environmentalists.

“Any excuse to continue using fossil fuels, even when it’s green washed using ‘carbon capture’ or ‘blue hydrogen,’ is unacceptable to most environmental justice and front-line organizations,” said Basav Sen, a climate policy director at the Institute for Policy Studies, which is a member of the 84-group Climate Justice Alliance.

He and many environmental justice advocates have said incentives should be more limited and include only renewable hydrogen. Even then, restrictions should be placed on the use of water and its type of consumption, since burning hydrogen directly can cause criteria emissions, opponents say.

“If indeed we are to have a PTC for hydrogen, it must be much more restrictive, and structured very differently,” Sen wrote in an email last week.

“[T]here is indeed is a silver lining to the death of the reconciliation package, giving us the opportunity to start all over again to create energy legislation that advances the kind of just transition we need,” he added.

Biden and next steps

President Joe Biden has taken some steps that may be able to advance low-carbon hydrogen somewhat even without congressional action, including ordering his government to develop “buy clean” standards that could encourage steelmakers and aluminum-makers to replace fossil fuel feedstocks with clean hydrogen, according to RMI researchers.

But for launching a hydrogen industry in the U.S., the production tax credit remains a “cornerstone” — and one that could still make sense for policymakers, said Nathan Iyer, an RMI associate.

“It’s still a player in the set of solutions,” he said.

Spokespeople for the new initiative said they think a hydrogen PTC still has a chance of passage.

Yet the group also plans to promote alternative policies. States could pass their own version of a PTC, they said. Both federal and state governments could guarantee demand by buying nuclear hydrogen, or institute incentives for consumers like ammonia- and steelmakers or even airlines, said Teplinsky.

Without additional support for hydrogen, she said, development isn’t likely to proceed fast enough for the U.S. to meet its climate goals.

“It’s the scale. Some projects will happen even without incentives. But the scaling is what we need, given the climate catastrophe,” she said.

That argument echoes one made by fossil and renewable hydrogen advocates.

Last week, the Clean Hydrogen Future Coalition (CHFC), whose members include oil and gas majors and several of the country’s largest investor-owned utilities, cast doubt upon the odds of achieving a key Energy Department goal for clean hydrogen — making it as cheap as natural gas by 2030.

That is unlikely to happen with existing policies, said Shannon Angielski, CHFC’s president, in an email to E&E News.

Her group also predicted that the climate package’s apparent failure could cause some private developers to delay or even cancel plans for hydrogen projects.

“A number of these projects were counting on some level on a federal PTC being in place. Without that, I’m sure they will have to go back and reexamine the economics,” said Janet Anderson, a lobbyist for the CHFC and a senior technical adviser at Van Ness Feldman LLP.

Researchers at clean energy group RMI, for instance, said that the Energy Department’s 2030 goal would still likely be reached in some parts of the country where hydrogen production could take advantage of the cheapest resources — like in the windiest regions — for green hydrogen.

“Nobody’s slowed down because of what happened over the last few weeks,” said Fisher.