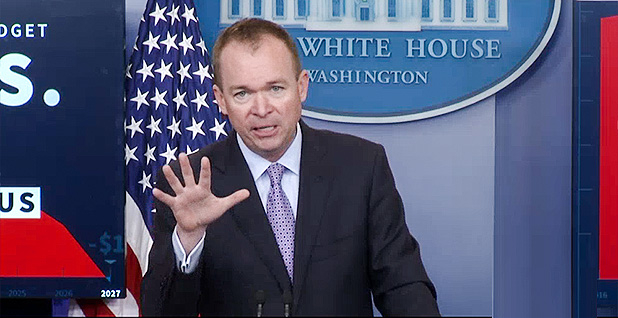 If Congress enacts President Trump’s dream budget, environmental efforts around the country will suffer, more people will get sick and die, and the offices charged with protecting them would face scores of lawsuits, according to a dire picture painted by state officials yesterday.

The proposal from the White House would take a sledgehammer to programs for the poor. It cuts Medicaid and nutritional assistance, and it slashes spending on work to clean up air and water pollution that disproportionately impacts lower-income Americans.

Bill Becker, executive director of the National Association of Clean Air Agencies (NACAA), said he could "guarantee with certainty" that the cuts would cause more illnesses and fatalities, as states would have to stall cleanups and forgo inspections and enforcement cases.

Republicans hinted that Trump’s outline might have gone too far in an attempt to balance the budget while increasing defense funding and cutting taxes.

Sen. Lisa Murkowski (R-Alaska), who saw some major cuts to key programs that benefit her state, said the administration "has a pretty aggressive goal, and they put down some pretty hard-hitting cuts." She said Congress would have to protect important initiatives.

Democrats saw an opportunity to flip Republicans to save environmental programs.

"If we can find three Republican senators who care about the environment and safety of drinking water, we might be able to turn it around," said Senate Minority Whip Dick Durbin (D-Ill.).

The cuts were extensive, made with an ax rather than a scalpel. In many cases, the White House deleted or renamed programs related to climate change (see related story).

"What I think you saw happen during the previous administration, the pendulum went too far to one side, when we’re spending too much of your money on climate change and not very efficiently," he said. "We don’t get rid of it here. Do we target it? Sure.

"We’re simply trying to get things back in order, to where we can look at the folks who pay the taxes and say, ‘Look, yeah, we want to do some climate science, but we’re not gonna do some of the crazy stuff the previous administration did,’" he said.

The budget proposal would zero out $1.6 billion in spending on the Green Climate Fund and the Global Climate Change Initiative, the United States’ chief account for addressing rising temperatures worldwide. It also would eliminate spending for the U.N. Framework Convention on Climate Change and the Intergovernmental Panel on Climate Change. It would severely constrict development and diplomacy accounts that have funded climate efforts in the past (see related story).

The plan would eliminate most of the climate work at EPA, except for a reporting program required by international law and some money for greenhouse gas requirements for vehicles. It would nix all funding for the popular Energy Star and other voluntary climate programs, totaling $66 million. It argues that the private sector or consumer groups could support those efforts (Climatewire, March 16).

The proposal acknowledges that the cuts would end programs meant to "mitigate the impacts of climate change," but justifies them by suggesting that those climate programs would prevent the United States from achieving the "energy needs of American families and businesses" by discouraging fossil fuel development.

The budget request also delivers sharp blows to basic research and development, the kind of programs that supporters say are needed to fund scientific studies and jump-start new technologies. Spending on R&D would drop 46 percent at EPA, falling mostly on science and technology programs and an account focusing on hazardous substances. The National Science Foundation would see a 12 percent cut to its R&D accounts (see related story).

"Even from a bean counter’s point of view, it should be obvious that spending money on climate change programs, especially science, will save much more in the long haul by better targeting policy," said Michael Oppenheimer, a professor of geosciences and international affairs at Princeton University. "It’s the old story of pay a little now or pay far, far more later."

Sen. Jim Inhofe, the Oklahoma Republican who was formerly chairman of the Environment and Public Works Committee, argued that the budget proposal would realign agencies to congressional priorities.

"We’ve got armies of people out there doing things that weren’t really designated by Congress," Inhofe told E&E News.

Inhofe said he has faith that EPA Administrator Scott Pruitt would not allow cuts to popular programs, including to clean up brownfields. But Trump’s budget plan would significantly reduce spending on that program.

"Ultimately, the decision comes out of people like Pruitt," Inhofe said, arguing that lawmakers on his committee are "believers" in some EPA programs. "I think that we’re going to be selective in a very wise way as to how to get rid of the things that are truly a waste of money or don’t follow the mandates that Congress had when they established programs."

Pruitt yesterday tweeted that he had "spent some quality time" talking about the importance of protecting the Great Lakes with Rep. Fred Upton (R-Mich.), the chairman of the House Energy and Commerce Committee (E&E Daily, May 24).

It’s unclear how Pruitt would protect the Great Lakes under Trump’s proposal, which would eliminate the Great Lakes Restoration Initiative, the main strategy for cleaning up legacy water pollution sites in places like Upton’s home state of Michigan (Climatewire, March 17).

Agency heads don’t necessarily have the freedom to move money around from program to program, and Trump’s budget wouldn’t spare many dollars for special projects.

Pruitt has advocated for states to take a greater role in controlling environmental regulations. The Trump administration budget request would cut funding for states to implement regulations by 45 percent (Climatewire, May 23).

Becky Keogh, director of the Arkansas Department of Environmental Quality, said she does not share the fears of NACAA leaders. The administration, she said, has reached out to states.

"I think we’ve all taken on ideas to be more innovative and had to live with lower budgets, and we’ve been able to be creative and find partnerships that allow us to divest some of our environmental programs and to only do those programs that really truly add value," she said.

Keogh, who is also the secretary-treasurer of the Environmental Council of States (ECOS), said the organization is working on ideas for how states can take on more authority. Governors and associations are reviewing it.

Interior Secretary Ryan Zinke said during a call with reporters that the budget request speaks to the "core mission" of the agency.

"I will admit, it was not an easy job," he said. "There were difficult decisions that had to be made. It funds our highest priorities … to make sure we look at safety, security and infrastructure."

Funding for construction and maintenance at the National Park Service would increase under the proposal. The request also would direct an additional $16 million toward the Bureau of Land Management’s oil and gas program, in part to help draw down the permitting backlog.

Trump’s budget plan also calls for oil and gas leasing in the Arctic National Wildlife Refuge, the Alaskan wildlands that drillers and environmentalists have fought over for years. It assumes revenues from that oil and from rescinding money that currently goes to four producing states under the Gulf of Mexico Energy Security Act.

The budget documents recognize that a shift toward promoting fossil fuels could get the government sued more. The White House requested $116 million for the Environment and Natural Resources Division of the Justice Department, a roughly 5 percent increase from current spending levels.

Rick Perry, who campaigned for president on eliminating the agency he now runs, has softened his line. Perry now is backing a $2.7 billion cut for the Department of Energy below the levels outlined in the omnibus spending bill.

"It reflects the importance of strengthening our nuclear capabilities, and places an emphasis on early stage energy technology research and development," Perry said in a press release.

The budget takes aim at popular programs, like DOE’s high-tech research development unit, the Advanced Research Projects Agency-Energy. ARPA-E would see a 93 percent cut below the omnibus spending bill, down to $20 million.

The office would wind down in 2018 and shut down in fiscal 2019, "at which point remaining monitoring and contract closeout activities would be transferred elsewhere within DOE," according to the budget documents.

Some Republicans pushed back against some of the proposed cuts to clean energy.

"I think our job now is to step up and make sure that these programs that are so important, so significant, have that support that they need," Murkowski said. "I have stated my support for ARPA-E."

Democratic staff on the Senate Energy Committee put together an analysis that found that the cuts to DOE would lead to 17,000 lost jobs across the United States and cost the country $8.35 billion annually in lost economic growth.

"We’re going to stand up and make a very strong statement about the need for continued science research and development efforts, including the National Renewable Energy Laboratory," said Sen. Cory Gardner (R-Colo.), referring to the DOE lab in his state.