Numbers to watch in budget deal 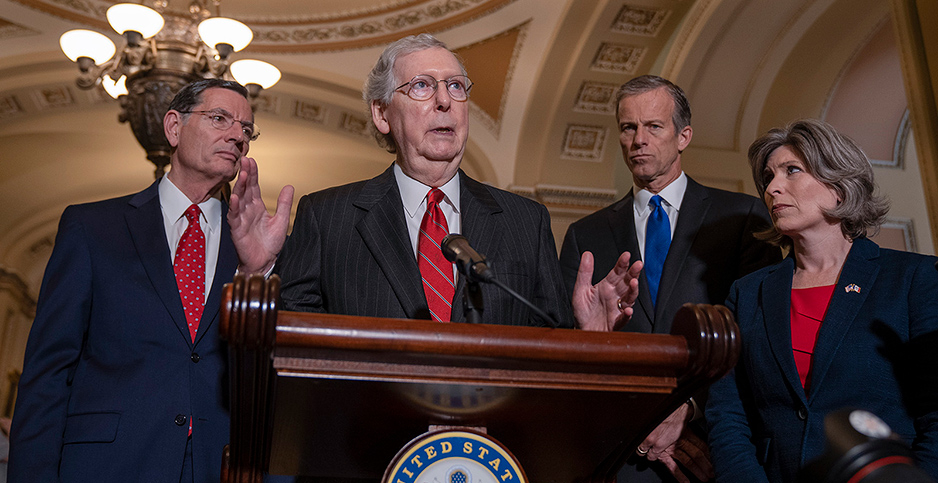 A sweeping budget deal Congress hopes to quickly pass will set the course for energy and environmental appropriations for the next two years.

Only 26 pages, the legislation will have major impacts that will ripple across the government by allowing more spending than had been expected and punting policy fights.

With the House due to vote on the bill tomorrow, here are three numbers that show how the deal — months in the making — will affect everything from agency funding levels to partisan spats over President Trump’s regulatory agenda:

That’s how much more money Congress will spend on discretionary programs during the next two fiscal years after scrapping budget caps.

All told, the bill will allow for about $1.37 trillion in discretionary spending, a 4% increase that will be spread across all agencies in fiscal 2020. It reverses what would otherwise have been a 10% cut, something that was unacceptable to either political party. Similar increases would also come in fiscal 2021.

Appropriators will now dole out new funds in the 12 annual spending bills. It’s likely to lead to at least a modest increase for EPA, which has largely been flat-funded by Congress during the past two years amid calls by the White House for steep cuts.

One of the most hotly contested features of the deal is an agreement to jettison policy riders from spending bills during the next two years.

Although the ban on riders is not written into the legislation, it is spelled out in a detailed side agreement written by bipartisan leaders and signed off on by the White House.

It would allow riders only if they are backed by both parties and the administration — a move aimed at banning "poison pill" policy provisions.

Conservatives pressed hard for excluding riders after House Democrats proposed a slew in their fiscal 2020 spending bills, including blocking Trump environmental rollbacks, bans on offshore drilling and keeping the United States in the Paris climate accord.

"There will be no new legislative riders to stop this president’s agenda on deregulatory initiatives or building the [border] wall," acting Office of Management and Budget Director Russ Vought said on the Fox News yesterday.

Democratic leaders, however, do not believe they gave up much in agreeing to the ban. They know most of the riders House Democrats have backed would have fallen out in talks with Senate Republicans as they did in the current year’s spending bills.

Still, Sen. Tom Udall (D-N.M.), the ranking member on the Senate Interior and Environment Appropriations Subcommittee, acknowledged that the decision to keep riders out won’t sit well with some Democrats.

"It’s a tricky area because whether it’s a poison pill or not is in the eye of the beholder," he told E&E News. "The House is doing a lot of things I think we should be doing here in the Senate. But if you’re going to get a budget deal, you have to try to figure out where the common ground is."

No single figure in the deal may prove more controversial than this one, representing less than half of the increase in federal spending that will be offset by other budget cuts.

Many House Republicans, especially conservatives, have said the full cost of the $321 billion increase needs to be paid for by other federal revenue or budget cuts if they are to get behind the deal.

The House Freedom Caucus last night announced its opposition to the budget agreement. And Rep. Mark Walker (R-N.C.), a leading conservative, tweeted a meme shortly after the deal was announced of the villainous Joker from the Batman movies torching money to express his displeasure over the lack of offsets.

Meanwhile, Heritage Action has promised a storm of tweets today to protest the spending and call for new budget negotiations.

But the opposition is not likely to matter in the House, where Democrats likely have the votes to pass it without much GOP support.

And in the Senate, a strong push from McConnell — who said yesterday he’s making "no apologies" for a deal that helps the Pentagon — is likely to get most in his party to fall in line.

One possible offset that could have raised billions of dollars but was not included in the final deal was selling off oil from the Strategic Petroleum Reserve.

Senate Energy and Natural Resources Chairwoman Lisa Murkowski (R-Alaska), who opposed tapping the SPR, said her case for preserving it may have been bolstered by the potential uncertainty in energy prices due to recent Iranian action in the Strait of Hormuz.

During yesterday’s closed-door Senate GOP luncheon, Murkowski brought up last week’s seizure by Iran of a British oil tanker in the Strait of Hormuz as "exactly the reason why we want to make sure that we have a solid Strategic Petroleum Reserve."

The House is expected to pass the deal before leaving for summer recess at the end this week, while the Senate should follow suit before it leaves Aug. 2.

Neither party is due back until the second week of September, with both only slated to be in session for 13 days before the new fiscal year begins Oct. 1.

The House has passed 10 of its 12 annual spending bills, while Senate appropriators have not unveiled their versions.

Senate Appropriations Chairman Richard Shelby (R-Ala.) said he would announce spending levels for the 12 spending bills by mid-August to give staff a chance to draft them during the break ahead of September markups.

But Shelby conceded that the tight time frame might require a stopgap funding bill to guarantee all agencies are funded by Oct. 1.

He said they’d likely focus on traditional priorities, including funding for the Energy Department’s Office of Science and Army Corps of Engineers projects.

"We always try to be at the head of the line if we can, and we have been able to do that in previous years," Alexander said when asked about meeting the Oct. 1 deadline.

Assuming the budget deal passes both chambers, Murkowski said she anticipates her subcommittee marking up its bill shortly after Congress comes back.

"September is going to be busy," she said.