Numbers to watch in the high‑stakes spending talks 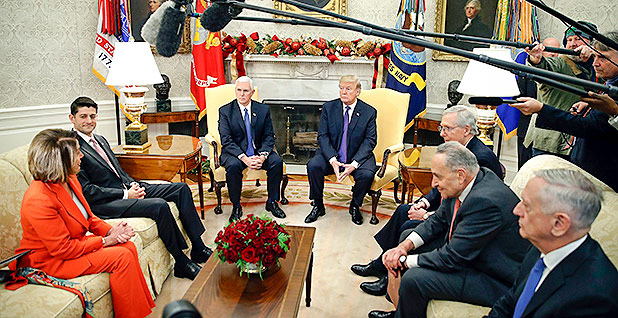 President Trump met with congressional leaders last week on a spending accord. One has yet to materialize. Alex Brandon/Associated Press

Congress is in the midst of frenetic negotiations to reach a budget deal before leaving later this month for the holidays.

Without an agreement, the federal government would face a shutdown just before Christmas, while an accord could soon mean stability to agencies that have been facing months of funding uncertainty.

Here are the key numbers to watch as those talks play out in the closing weeks of the first session of the 115th Congress and early next year.

Congressional Republicans have been floating a proposed deal that would raise discretionary spending by more than $200 billion over the next two years.

Once the budget target is set, lawmakers would pass another stopgap extending current funding into next January or even February. And it would effectively put into law topline discretionary funding levels, easing current caps.

Lawmakers would then divide that discretionary spending among the 12 fiscal 2018 spending bills with a goal of assembling an omnibus appropriations package for the rest of fiscal 2018.

They would set overall defense spending at $619 billion for fiscal 2018 and nondefense agencies, like U.S. EPA and the Interior Department, at $553 billion.

Leaders from both parties and the White House have agreed they want to hike military dollars, but Democrats insist they want the same increase for nondefense programs.

Conservatives, particularly in the House, have been loath to put defense spending on equal footing with domestic agencies that they would rather see cut back.

That’s the high-water mark now for funding proposed for Interior and EPA under a bill released by Senate appropriators last month.

The proposal would largely level-fund Interior; cut EPA; and provide modest increases for agencies like the Fish and Wildlife Service, National Park Service, and Bureau of Land Management.

Neither the Senate nor House is on aboard with a push by the White House to cut EPA funding by one-third to $5.6 billion, but both have sought to hold it below its current $8.1 billion.

The House wants EPA funded at about $500 million less than current levels next year, while the Senate hopes to shave it by about $100 million.

If there’s a deal to raise spending, more money could potentially flow toward agencies covered by the bill. But for EPA, whose own Administrator Scott Pruitt has been open to deep cuts, the likely scenario is level funding.

Budget negotiators will also have to resolve massive differences in funding for the Advanced Research Projects Agency-Energy, the Department of Energy’s in-house incubator of promising but high-risk projects.

The House-backed energy and water spending bill for fiscal 2018 sides with the White House by eliminating all $300 million in spending for ARPA-E. Senate appropriators went the opposite direction by calling for an 8 percent increase to $330 million.

The Senate’s push to keep the agency alive and increase funding suggests the House bid to scrap it probably never had a realistic chance.

If negotiators can reach an agreement, then it would seem ARPA-E would have a reasonable shot at coming much closer to its current level of $300 million than being killed.

A major bargaining chip in the budget talks will be the White House’s $44 billion request in aid for states and territories hit hard by hurricanes and wildfires.

Both parties have said the administration request is too low, and there has been bipartisan talk that it could nearly be doubled.

But questions remain over how much of the money would have to be offset by federal cuts elsewhere in the budget sought by conservatives.

Most Republicans might be willing to allow the increase without the offset if they knew it was coupled with a defense hike.

Democrats, though, might want assurances that some of the emergency aid goes beyond direct aid for long-term storm and fire remediation projects, which the White House and conservatives might balk at.

Lawmakers from both sides of the aisle expect the bipartisan aid package to be attached to a coming spending measure, in part to attract votes in both chambers.

Republicans hold narrow majorities in both chambers, and bipartisan backing may be the only way to get a fiscal 2018 spending deal to the president’s desk.

The Senate poses particular challenges for Republicans, where they hold only 52 seats — eight short of the 60 seats needed to break a possible Democratic filibusters to any spending legislation.

Democratic leaders have signaled their caucus would be united in opposing a deal that does not offer parity for defense and nondefense spending or if extraneous policy riders are tacked on by the GOP.

Republicans hold a more comfortable 23-seat margin in the House, but the three dozen members of the hard-right Freedom Caucus have resisted domestic spending increases.

If they hold firm, leaders will need to rely on House Democrats, whose price would likely be equal defense and nondefense spending increases for fiscal 2018 and a robust hurricane/wildfire package.