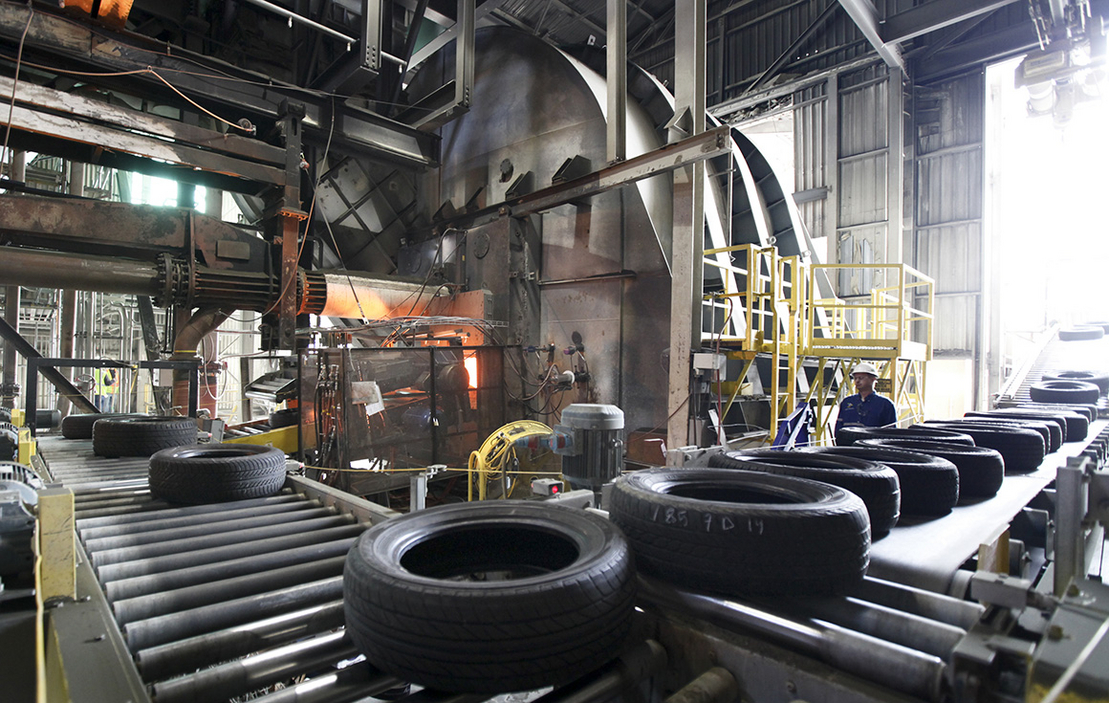 Used tires being fed into the kiln at the Cemex plant in Louisville, Ky., in 2012. Some cement plants are burning tires and other unusual fuel sources to reduce carbon emissions. AP Photo/The Courier-Journal, Michael Clevenger

One California cement plant burns tires and pistachio shells in its 2,700-degree kiln. Another feeds plastic and fabric into its rock-melting oven.

“We need to do things in a way that is scalable,” said state Sen. Josh Becker (D), who introduced the measure, S.B. 596. “That’s either by doing policies that others can replicate, or by creating markets, because we’re such a large state, that bring down the cost of cleaner technologies.”

Becker said the law could “make a global impact.”

The law is among a series of programs to help California reach carbon neutrality by 2045. There’s also a drive to make cement greener at the federal level.

A coalition of business and environmental groups is lobbying the Biden administration for guidance requiring the federal government to buy lower-carbon cement and concrete. Cement is a key ingredient in concrete.

It comes as the industry is taking steps to lower its emissions output. The Martin Marietta cement plant in Redding, Calif., burns coal, natural gas and petroleum coke as well as tires and pistachio shells. It also is adding a carbon capture system that can be used to store its emissions in materials for its own product: cement.

The Cemex cement plant in Victorville, Calif., burns tires and wood chips along with a waste mixture than can include fabric and plastic. The company is studying the use of carbon capture at the facility.

The California law, signed by Gov. Gavin Newsom (D) last month, tells the state Air Resources Board, a key agency for climate policy, to develop a strategy for industry carbon neutrality. Even without federal moves, the state rule could prompt broader action among cement makers.

“When we talk about environmental policies, how goes California goes the nation sometimes,” Barrera said. “So the way industry reacts in California, the technology that is developed and deployed in the state, might have enormous benefits for the industry as a whole.”

How feasible is it?

The California Air Resources Board must release its plan for cement carbon neutrality by summer 2023. The new law also included a midterm goal of cutting emissions 40 percent below 2019 levels in less than seven years.

Cement manufacturing worldwide emits 8 to 10 percent of the greenhouse gas emissions causing climate change, said Gaurav Sant, director of the Institute for Carbon Management at UCLA. It’s used in concrete virtually everywhere, he said, pointing to roads, bridges and buildings. There are ways to reduce cement use in concrete, but not eliminate it, Sant said.

“So when you think about the fact that every construction activity that we wish to fulfill requires these materials, we naturally have an incentive … as a state, but also as a society, to make sure that we decarbonize these sectors,” Sant said.

Reaching carbon neutrality in the cement industry is feasible, but difficult, Sant said. Cement manufacturing is a top polluter because of the chemical composition of the product, and because of how it’s made.

Making cement requires breaking down limestone and recombining the parts in a kiln. That chemical process by itself emits carbon dioxide. Limestone, after its decomposition, is combined with sand and clay to produce cement clinker. That’s ground with gypsum into a fine powder to make cement.

The kilns used in the process need to reach 2,700 degrees Fahrenheit. For decades, that meant burning coal, petroleum coke, oil or natural gas.

“It’s the carbon dioxide emitted from the decomposition of limestone, and from the combustion of a fossil fuel, that gives cement its incredible carbon intensity,” Sant said. Every metric ton of cement produced emits about a ton of carbon dioxide.

Alternative fuels like used tires and agricultural waste can reduce the product’s carbon intensity by 10 to 15 percent, Sant said.

“This is not going to give you the big reductions that you actually need,” he said, adding that “all reductions in carbon intensity that we can achieve are all worth it. … What you really want to work towards is applying a portfolio of solutions where you do everything, big and small.”

The industry calls it “carbon capture utilization and storage” because it argues that the carbon can be put into the cement. Sant is founder of CarbonBuilt, a startup company marketing technology to capture carbon emissions and inject them into a special mix for concrete. Developed at the UCLA Samueli School of Engineering, the system reduces emissions by more than half, the company said.

Technology exists to capture the carbon dioxide directly from the plant’s flue, a pipe to the outside. Then the plant can concentrate and compress the carbon for geological storage. However, that can be costly.

And putting it into cement gets complicated because currently there aren’t pipelines in place to move the captured carbon from the plant to where it could be put into cement, Sant said.

“So transport costs and logistics really start to become the challenge,” Sant said.

One option would be taking carbon emissions from another type of factory near the cement plant, and putting them into the cement, Sant said. That would offset the amount emitted by a cement factory.

That would be permissible under the new California law, said Alex Jackson, a lawyer with the Natural Resources Defense Council. NRDC supported the legislation.

The law doesn’t allow the cement industry to achieve carbon neutrality by investing in projects that reduce carbon emissions elsewhere, if they’re unrelated to the materials, energy sources, processes or transportation involved in making or using cement.

Other aspects of the law have potentially broad reach. S.B. 596 directs the California Air Resources Board to look at how to protect in-state producers, including considering “a border carbon adjustment mechanism.”

The California cement industry wants the law to apply to imported cement. That would have a big impact globally, said Barerra at LafargeHolcim.

“It would force other people to innovate, or be shut out from that [California] market,” he said. “And it would incentivize global producers, obviously, to come up to code if they want to sell in that market.”

The California law could pay companies to make cleaner cement, said Tom Tietz, executive director of the California Nevada Cement Association, a trade group. It supported the final version of the law.

“We can only reach carbon neutrality with help,” Tietz said. “Legislative and regulatory relief is a key part of our industry reaching net neutrality. There’s no other way we can do this. There’s too many barriers, too many costs for us to do it alone.”

The Air Resources Board could include financial incentives such as a low-carbon cement standard, similar to the state’s existing Low Carbon Fuel Standard. It pays companies that produce lower-carbon fuels.

Investment in carbon capture use and storage also is wanted, both in California and at the national level. Those projects are expensive.

The first full-scale carbon capture program in the world for cement manufacturing cost more than $2 billion, Tietz said. HeidelbergCement, which is building that project in Norway, said it plans to capture all of the plant’s carbon emissions by 2030.

“It gives you an idea of what it takes to really do this,” Tietz said. “There’s one example of a government that was very invested in making this happen.”

But it’s more than some companies will spend, because “the government hasn’t incentivized the utilization of this carbon,” Barrera said, and “there’s not a lot of markets for it.”