Obama appointees negotiated for jobs while still in office 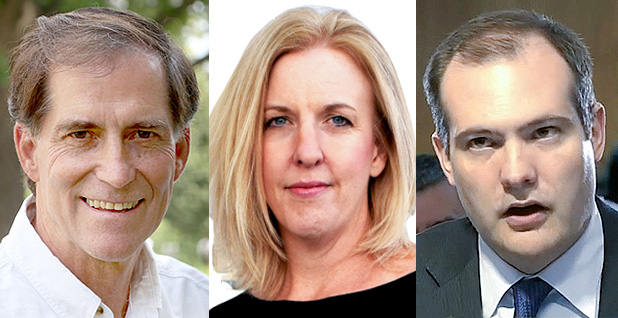 In July 2016, Hopper, then director of the Bureau of Ocean Energy Management, filed a recusal statement saying that she was in job negotiations with the Solar Energy Industries Association.

Others also appeared interested in Hopper. She filed another statement later in December giving notice of employment talks with Siemens AG.

Hopper went to SEIA in the end, joining the solar trade group on Jan. 17 as president and CEO (Greenwire, Jan. 9).

In an email to E&E News, Hopper said she abided by all ethics rules as head of a federal agency.

"I take my obligations seriously and filed the appropriate recusals as necessary. I followed all the ethical requirements I was obligated to," Hopper said. "As to my job after the administration, I chose one that worked well for my family and me."

Documents obtained by E&E News under the Freedom of Information Act show that more than a half-dozen of President Obama’s top-level Interior Department appointees drew interest from corporations, law firms and trade associations. Those talks led the officials to recuse themselves from policy decisions while they still served in the federal government.

The records show that several of those appointees began job negotiations with future employers months before Obama and they left office. Several landed at high-powered firms, where their Interior Department experiences could prove invaluable.

Larry Latourette, president of Veritas Lex LLC, a head-hunting firm for law and lobby shops, said it is smart as well as typical for such high-level officials to negotiate with more than one future employer.

"If I’m looking for a job, I don’t want to be dependent on one source. Because if that falls through, I want to have several alternatives," Latourette said. "In a job search, it behooves everyone to have several irons in the fire."

"Law firms, even if they are at an accelerated pace, can take at least four months. There are conflicts to sort out, meetings to be had, questionnaires to fill out," Latourette said. "I have had things go on for a year."

Scott Amey, general counsel for the Project on Government Oversight, offered a more critical assessment, saying in an email that "the revolving door has become such an accepted activity in recent years that it is frequently difficult to determine where the government stops and the private sector begins."

At least three officials had begun talks with future employers by May 2016.

Tommy Beaudreau, then Interior’s chief of staff under Secretary Sally Jewell, had entered into job negotiations with a top-tier law firm, Latham & Watkins LLP, according to a recusal statement filed that May. A few months later in August 2016, Beaudreau gave notice that he was also talking to Wilmer Cutler Pickering Hale and Dorr LLP.

Latham eventually hired Beaudreau, who spent more than six years at Interior, including as the first director of BOEM. He ended up at the firm with a slate of other former Obama administration officials days after the 44th president left office this January.

Julian Ha, a partner at executive search firm Heidrick & Struggles, said he could see the value in hiring Beaudreau.

"I’m sure both firms had an existing practice or wanted to build it out with someone like Tommy," Ha told E&E News. "It’s not inconceivable that he would be attractive."

Beaudreau did not respond to messages from E&E News asking for comment.

Filing a recusal led some Obama appointees to step back from policymaking in the administration’s final days.

In May last year, Dan Ashe, then the Fish and Wildlife Service director, filed a recusal statement that he was in talks with the Association of Zoos and Aquariums about a future job. On Jan. 19, he said in a tweet that he was joining the group.

Between filing his recusal form and taking the AZA job, Ashe recalled two instances when he recused himself from policy decisions as FWS chief, according to Rob Vernon, an AZA spokesman.

Vernon said that to stay in line with his recusal, Ashe did not participate in FWS’s red wolf management plan. And while at a 2016 meeting with the Convention on International Trade in Endangered Species of Wild Fauna and Flora, he also abstained from pushing a U.S.-backed proposal on the definition of "appropriate and acceptable destinations" of animal species.

In May 2016, Kristen Sarri, who then ran Interior’s Office of Policy, Management and Budget, filed a recusal statement that she was discussing future employment with the National Marine Sanctuary Foundation.

Sarri became president and CEO of the group that October.

Ha said political appointees initiating employment negotiations months before their service ends is necessary, since they will be out of a job come January.

"Most people know that their principal is not going to continue on so they would know that they need to move on as well," Ha said. "There’s a hard stop that’s coming down."

Not every recusal in the Obama administration’s final days dealt with potential post-government employment.

On Jan. 3, in a similar vein, Tompkins reported that Stanford Law School was paying for her lodging and one-way airfare on the West Coast. The next month, she spoke at the school, from which she had graduated in 1996.

"One of the fondest memories I have in my prior role as solicitor was meeting with law students and guest lecturing at law schools around the country," Tompkins said in an email, adding that "if a local law school would want me to come visit for a class I would be thrilled to do so."

Tompkins also filed a recusal statement involving the Wildlife Society, which is paying for her airfare, lodging and meals as she participates in a conference this month.

Once she left Interior, though, Tompkins landed at the law firm Hogan Lovells LLP. She joined as a partner Feb. 27.

"Hogan Lovells has a stellar reputation and global footprint that were both attractive to me," Tompkins said. "I also was drawn to Hogan Lovells because they were very supportive of my interest in expanding their federal Indian law practice."

The revolving door has returned some high-level Interior Department employees to where they started, albeit with enhanced résumés.

In mid-December, Assistant Secretary for Land and Mineral Management Janice Schneider reported that on Dec. 8 she had begun post-government employment negotiations with Latham & Watkins. She had previously worked for the firm between 2001 and 2014, when she joined Interior.

On Jan. 25, Latham & Watkins announced Schneider was coming back as a partner, along with two of her Interior colleagues, including Beaudreau.

"Latham’s environmental practice has long been at the top of the market," Jim Arnone, global chair of the firm’s Environment, Land & Resources Department, said in a statement.

Some Interior Department veterans have set out on their own.

The foundation’s stated purpose is to "advance the use of ethical and scientifically-sound land management practices and partnerships for the benefit of people and the environment."

Christina Schellpfeffer, the foundation’s vice president for external relations, said that "Sand County Foundation’s discussions with [Bean] were related to his consulting role. He has committed to writing a short series of papers for us on the Endangered Species Act."

Another Interior Department alumnus with environmentalist credentials, former Nature Conservancy staffer and ex-Principal Deputy Assistant Secretary for Water and Science Tom Iseman, filed a statement Aug. 9, 2016, that he was in discussions with his old colleagues at the conservation group concerning the organization’s Global Freshwater Program.

Iseman also filed a recusal form on Aug. 3 last year concerning WaterSmart Software. Iseman could not be reached to comment.

In an email yesterday, Iseman said he filed the form concerning the Nature Conservancy because he "had discussed the position with a TNC employee and had not immediately rejected it." The organization subsequently reconsidered the position.

"They re-posted a revised version of the position this spring, and I did apply and ultimately was selected," Iseman said. "I started August 7."