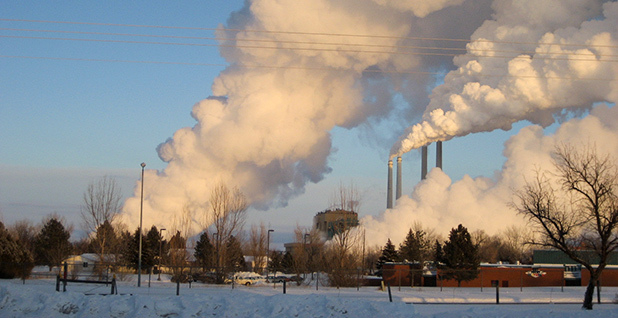 In Colstrip, Mont., where plants are being threatened with closure, federal climate change regulations are playing a key role in political races. Photo by Rachel Cernansky, courtesy of Flickr.

LAUREL, Mont. — Republican gubernatorial candidate Greg Gianforte ticked off a few of the environmental regulations he wants to "wrangle up" and "put out to pasture" for a small crowd at the Beartooth Grill, the 60th stop of his statewide "Regulation Roundup" tour.

Gianforte’s targets include federal sage grouse conservation plans, U.S. EPA’s Clean Water Rule and one Obama administration regulation he can’t bring himself to call by its formal name: "The Costly Power Plan" is Gianforte’s term for the Clean Power Plan, the president’s attempt to limit carbon emissions from the power sector.

"We’re losing our state sovereignty," Gianforte told about 20 voters to nods of assent. Environmental regulations today are "not just punitive," he said, but "punitive with an agenda."

Federal climate regulations may be a hot political issue in conservative, coal-heavy states across the nation, but so far the issue has not yet emerged as a voting wedge in many of the 12 gubernatorial races taking place this cycle. Rather, said Jennifer Duffy, senior editor for The Cook Political Report, it’s an issue that "will come up on the laundry list of things the candidates talk about or are asked about."

Montana is the exception. Here in a state that sits on about a quarter of the nation’s coal reserves and receives tens of millions of dollars in revenue from the industry each year, the Clean Power Plan is a major political flashpoint. Far-right Republican Gianforte is using the regulation to attack incumbent Democratic Gov. Steve Bullock, despite the fact that the governor’s public support for the Clean Power Plan has been comparatively tepid.

Gianforte is new to politics and is better known for founding a successful Bozeman-based software company that he sold to a global corporation in 2011 for $1.5 billion. He touts his status as a political outsider, claiming his business experience will be a boon to the state’s economy.

But the technology magnate is also campaigning on coal, singling out Bullock’s approach to complying with the Clean Power Plan as a point of attack. Republicans hope Gianforte’s condemnation of the Clean Power Plan will give him an edge, said a source familiar with the campaign, in part by appealing to the state’s union Democrats, among whom there is a growing sentiment the governor has not fought climate regulations hard enough.

In this election, "small things at the margins make a big difference," the source said.

Neither campaign has released polling data, but both candidates are raising significant sums for a state of just over 1 million people. So far, Gianforte has brought in more than $740,000. He has pledged not to take any political action committee dollars, but sources familiar with both campaigns expect him to dip into his personal funds as the campaign wears on. Bullock has taken some PAC money and has significant support within the Democratic Party, banking more than $1.3 million so far for the campaign.

In an interview with ClimateWire after the meeting in Laurel, Gianforte positioned himself as a leader willing to put up a fight for the state’s fossil fuel industries.

"People are concerned that this ideology from Washington against coal is going to have a negative impact on our state," he said.

"We don’t have a leader in the governor’s office," Gianforte added. "We need someone who is going to stand up and defend the interests of Montana."

Bullock acknowledges climate change is real and poses challenges for Montana. Unlike many other Democratic governors, though, he isn’t a big Clean Power Plan supporter.

Under the federal plan, states must cut carbon emissions from existing power plants 32 percent from 2005 levels by 2030.

EPA’s final rule came down hard on Montana, requiring the state to slash its carbon emissions rate by 47 percent, compared with 21 percent in a previously proposed version.

Bullock was broadsided, saying in a statement he was "extremely disappointed" with the final decision because it "moved the goal posts" for his state.

Nevertheless, the governor was among many state leaders who opted to prepare a Clean Power Plan compliance strategy to submit to EPA anyway. Bullock’s reasoning: Doing so would allow Montana to "keep control over its energy future." Then, when the Supreme Court last month announced a stay of the Clean Power Plan, Bullock became the first governor in the nation to declare his state would halt preparations and disbanded a council he created to advise on an emissions reduction strategy.

Bullock’s staff declined multiple requests to interview the governor for this article. Given the coal industry’s role in his conservative state — a recent report by Headwaters Economics found the industry provided it with $186.5 million in direct tax revenues in 2014 — political observers say Clean Power Plan implementation was a tricky task for the Democrat in an election year.

Chuck Johnson, a former state government reporter and board member for the Montana Historical Society, said the stay "probably helped Bullock by taking the issue out of the 2016 campaigns."

But some Montanans perceive the governor as avoiding the issue. Several said they support Gianforte because he is eager to fight for the coal industry.

"I support the heck out of the guy because he recognizes us," said Colstrip, Mont., resident Ashley Dennehy, 24, whose husband works at a coal mine on the outskirts of her hometown.

As goes Colstrip, so goes Mont.

Gianforte’s criticisms of Bullock and federal climate change regulations often invoke Colstrip, a tight-knit community of about 2,300 people in the state’s southeast that is home to the second-largest coal-fired generating facility west of the Mississippi River.

The plant, which employs about 360, could see at least a partial shutdown within the decade. That’s because more than 700 miles away, leaders in Washington state — which imports much of Colstrip’s electricity — are becoming ever more aggressive about climate change, especially in the wake of the Clean Power Plan. New regulations in the proudly green state are putting pressure on some of the Colstrip plant’s co-owners to shut down two of its four coal-fired units.

"Montana is a very close network. Everyone knows everyone else, and what happens in Colstrip is going to affect the rest of the state," Rinfret said.

Some Colstrip residents said they felt Bullock has not given their town enough public support.

"The governor is weak. He doesn’t have any push," rancher Hugh Broadus, 77, said from the front seat of his truck. "We need someone to get ahead of this thing — shout obscenities, or whatever it takes to get attention."

According to EPA, the Colstrip generating station produced about 14.9 million metric tons of CO2 in 2014. Gianforte denies these emissions are an issue for the climate.

"Shutting Colstrip down is not going to change the environment in any significant way," he said.

As governor, Gianforte said, he would have thrown support behind Republican Attorney General Tim Fox’s lawsuit challenging the rule. But he also acknowledged that if the court system upholds the Clean Power Plan, he, too, would prepare a compliance strategy.

"We need a power plan for Montana," Gianforte said.

Gianforte falls to the right on a number of other issues. A National Rifle Association supporter, he proudly showed off a photo of a gun he purchased for his son for Christmas. In 2006, his wife, Susan, established the Gianforte Family Foundation, which has given money to conservative organizations, including some that oppose gay marriage and abortion.

Gianforte is one of two Republican gubernatorial candidates backed by the AegisPAC, a project under the Arlington, Va.-based political firm Aegis Strategic. Aegis Strategic is headed by several former leaders of Americans for Prosperity, a well-known national conservative group with ties to the Koch brothers.

According to its website, AegisPAC’s chosen candidates will increase "access to affordable, abundant and reliable energy sources," among other qualifications.

Montana’s environmentalists are wary of a potential Gov. Gianforte. He has said multiple times he wants to place an industry insider at the helm of the Montana Department of Environmental Quality. That, he argues, would create a "culture of customer service" within the state agency.

Montana is a conservative state, however, and both campaigns expect the upcoming race to be close. Bullock won in 2012 with a narrow margin of 48.9 percent to the Republican candidate’s 47.3 percent.

University of Montana political science professor Jeffrey Greene said he believes Bullock has an incumbent’s advantage. Montana voters recognize the governor as a moderate, he said, so he expects Gianforte will continue ramping up his attacks on Bullock’s specific policy choices.

"It will be a nasty race," Greene said.