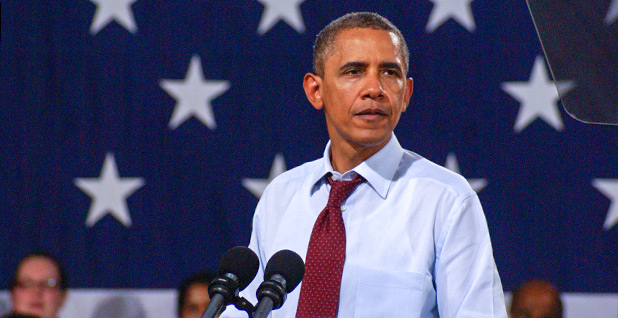 Former Obama administration environmental staffers are preparing for combat against the officials in their former jobs.

President Trump’s victory in November threw many Obama aides out of jobs and dramatically changed career prospects for those hoping to work on energy policy in a Hillary Clinton administration. Now, as they prepare to fight Trump’s environmental agenda for the next four years, many former Obama staffers are flocking to new gigs on Capitol Hill and in state governments.

Since taking office in January, Trump has made rolling back President Obama’s environmental agenda central to his policy goals. Last week, Trump issued a sweeping executive order that knocked down some of Obama’s most significant actions on climate change.

And the left, forced to rewrite its playbook, is increasingly looking to state leaders and members of Congress to play defense.

Democrats’ multipronged approach to fighting Trump from outside the executive branch includes states attorneys general banding together to fight the administration in court (Greenwire, March 1), lawmakers beefing up their oversight on Capitol Hill and state officials aiming to advance aggressive environmental policies despite a retreat by the federal government.

"[T]he political power that can make the biggest difference resides with the governors, mayors and other elected officials who can pick up the climate-change mantle abandoned by the Trump administration and help the United States lead by example," John Podesta, who was chairman of Clinton’s presidential campaign and Obama’s top environmental adviser, wrote in a recent op-ed in The Washington Post.

"Working together, these leaders can serve as a powerful counterbalance to the lack of climate policy ambition that the Trump administration is demonstrating at the national and international levels."

A spate of former Obama officials have landed in state government gigs since leaving the administration.

"It’s not surprising that a lot of folks are gravitating toward states," said Ali Zaidi, a former energy official in the Obama White House who’s now a senior adviser at Morrison & Foerster LLP.

Those jobs are attractive to Obama energy staffers because "it’s an opportunity to ensure that some of the actions being contemplated and undertaken by this administration don’t have the impact that the rhetoric would suggest that they might," Zaidi said.

Liz Purchia, who was a U.S. EPA communications aide under Obama, said work in the states will be similar to what happened under the George W. Bush administration, when California and a consortium of Northeastern states advanced their own aggressive climate change policies.

"There will be exponentially more than that happening at the state and local level now that the threats of climate change are better understood and more severe," said Purchia, who recently helped launch a communications firm that’s been countering the Trump administration through messaging.

In New Mexico, former Interior Department official John Blair was named deputy secretary of state late last year. Blair was Interior’s director of intergovernmental and external affairs after working in the House for Democratic Reps. Dan Kildee of Michigan and Martin Heinrich of New Mexico. Even though the governor of New Mexico, Susana Martinez, is a Republican, Secretary of State Maggie Toulouse Oliver is a Democrat who was elected independently.

Former energy and transportation aide Shoshana Lew started this week as chief operating officer at the Rhode Island Department of Transportation, the agency announced. Lew was chief financial officer and a deputy assistant secretary at the Transportation Department under Obama; she was also a senior adviser at the Interior Department and a White House energy and climate adviser.

In Montana, former Obama aide Patrick Holmes was appointed natural resource policy adviser to Democratic Gov. Steve Bullock in January. Holmes worked at the Agriculture Department under Obama as chief of staff to the undersecretary for natural resources and environment.

Shara Mohtadi has joined the New York State Energy Research and Development Authority as a senior adviser. She previously worked on energy and natural resources in the White House Office of Management and Budget.

Meanwhile, Democratic lawmakers on Capitol Hill are packing their offices with former Obama energy aides as they prepare for four years of Trump administration oversight.

For example, Sen. Tom Carper (D-Del.), the new ranking member of the Senate Environment and Public Works Committee, has hired alumni of the Obama EPA for key committee posts.

They include Joe Goffman, who was the lead attorney in EPA’s air office and one of the chief architects of the Obama administration’s air rules. Goffman is now chief counsel on Carper’s EPW Committee staff, according to the congressional database LegiStorm.

Another recent Carper hire is Christophe Tulou, who was senior adviser to EPA Administrator Gina McCarthy on the Chesapeake Bay. Tulou is now the EPW Committee’s minority chief counsel, according to LegiStorm.

Other former veterans from the Obama EPA, White House and other federal agencies are also landing energy policy jobs on Capitol Hill.

Kristina Costa, who worked on the Clinton campaign and as an aide to Podesta in the White House, is now a legislative assistant for Senate Minority Leader Chuck Schumer (D-N.Y.).

Jon Monger, who was a policy adviser in EPA’s transportation and air quality office, has started as Democratic counsel on the House Energy and Commerce Subcommittee on Oversight and Investigations, according to LegiStorm.

Trent Bauserman, who worked at the White House Council on Environmental Quality and as Obama’s legislative affairs liaison to the House, is now a senior policy adviser to House Minority Whip Steny Hoyer (D-Md.). He’s taken on the energy and environmental portfolio previously held by Mary Frances Repko, who recently moved over to Carper’s EPW office. Bauserman was formerly an energy policy adviser to Sen. Jeanne Shaheen (D-N.H.).

For Bauserman and other Capitol Hill veterans, "it was a natural fit to go right back" after the Obama administration left office, he said.

With the Trump administration in the executive branch, "providing a level of oversight and accountability of the administration is certainly an important role that I think Democrats on the Hill will undertake."

Blake Androff, who headed communications at the Interior Department, is executive director at the Democratic Policy and Communications Committee, which is charged with developing House Democrats’ caucuswide messaging strategy (E&E Daily, Feb. 2).