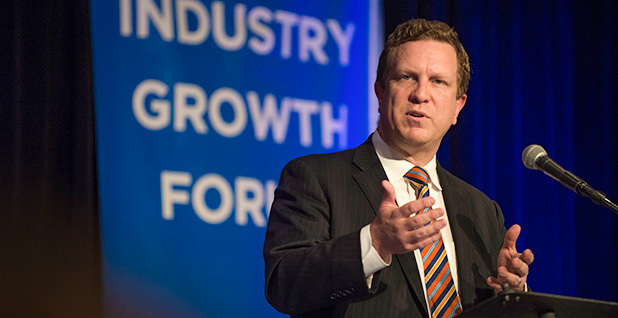 David Danielson, who leads the Energy Department's Office of Energy Efficiency and Renewable Energy, announced yesterday that he will step down. Photo courtesy of the National Renewable Energy Laboratory.

A once-sleepy department of nerds and nukes in the austere Forrestal Building has transformed over the last seven years into the Obama administration’s economic and technology arsenal for the fight against climate change.

Currently serving as the assistant secretary for energy efficiency and renewable energy, a muscular $2 billion branch of the Department of Energy, Danielson announced yesterday that he would be leaving his position at the end of this month over family concerns (E&ENews PM, May 2).

Despite the radical change in scope and ambition at DOE, the agency’s technology-led push to curb greenhouse gas emissions stands to be one of the Obama administration’s enduring legacies and, for Danielson, the source of some of his biggest accomplishments.

"I think that there has been a real transformation of the Department of Energy under the Obama administration," he said. "I’m pretty proud of the organization we’ve built here."

In May 2009, when Danielson joined DOE, the immediate concern wasn’t the planet’s fever, but the hemorrhaging economy. The United States was mired in the Great Recession and lost more than 300,000 jobs just that month.

He was the first hire for the Advanced Research Projects Agency-Energy, a program modeled on the Pentagon’s legendary in-house research and development bureau (ClimateWire, March 2).

With a fresh funding injection from the American Recovery and Reinvestment Act, officials aimed to lead the market by example, betting on ambitious high-risk energy projects that, if they worked, would change the world. DOE as a whole received $38.3 billion under the Recovery Act over two years, a 75 percent budget increase.

ARPA-E has since graduated more than 200 projects that have gone on to receive more than $1 billion in private-sector financing and earned bipartisan praise from legislators.

Urgent initiatives like ARPA-E and the corresponding cash influx to ignite job creation were big shifts for an agency originally tasked with the plodding duty to steward the United States’ nuclear weapons arsenal, operate 17 national laboratories and work with the notoriously stodgy energy industry.

Another set of changes is the tough technology targets DOE sets for itself. Under its SunShot Initiative, a program launched in 2011, the department aims to bring down the costs of solar energy until it can go head to head with fossil fuels on the open market by 2020 (ClimateWire, Dec. 18, 2015).

"We were told it was too aggressive," Danielson said, "that it would never happen." He noted that the United States is now more than 70 percent of the way there, with the focus moving away from the technology toward "soft" costs like permitting and installation.

From breakthroughs to commercialization

In 2012, Danielson was confirmed as an assistant secretary to lead the Office of Energy Efficiency and Renewable Energy. The office funds research and development in categories like home weatherization, vehicle technologies, advanced manufacturing, biomass energy and hydropower.

There, Danielson led efforts to commercialize new technologies in national laboratories, like fast-charging batteries and stronger composite materials. "About half of our research and development funds go into the national labs," he said. "I do think there is a very important government role in the early stage of the innovation cycle."

DOE in 2014 launched Lab-Corps, an intensive program that trains scientists in national laboratories to make business cases for the things they invent, with the aim of speeding up the development process for new technologies.

EERE also started a $220 million project to modernize the electrical grid, bringing the whole office together to nibble at different parts of the problem, like upgrading aging hardware, managing intermittent renewables, keeping the grid stable with distributed energy production and developing business models to keep utilities from going broke, all while cutting greenhouse gas emissions.

In running EERE, Danielson said, one of his overarching strategies was to break down barriers between technology groups. "Over the last four years, I’ve emphasized creating one organization," he said.

But it’s easier to build bureaucracies than it is to break them down while keeping things running. In particular, Danielson said, he wanted to create a unified information technology system for EERE before he left his post in order to ease coordination.

The process proved challenging, and while Danielson said he expects this to go through, he doesn’t think it will happen before he steps down.

Mark Muro, a senior fellow in the Metropolitan Policy Program at the Brookings Institution, said Danielson was crucial to setting DOE on a new course.

He observed that EERE has been especially effective in making national energy innovation strategies have local impacts, using the national laboratories scattered throughout the country to create technology hubs in their local communities.

Though many of the changes in DOE came from the top down, Muro said a future administration is unlikely to reverse them, given strong political support for energy research and development even among those who don’t share the president’s urgency on climate change.

A new president, and new policies?

Others, however, suggested that DOE has overstepped its bounds in supporting clean-tech companies and questioned whether these policies have gained any ground in the fight against warming.

"DOE’s record over the past seven to eight years of supporting companies has not been sterling," said Benjamin Zycher, the John G. Searle chair and an energy scholar at the American Enterprise Institute.

Zycher said the environmental payoff for all the taxpayer investments in clean energy is likely not worth the risk, even if the financial payback were positive. The better strategy would be to invest in adapting to climate change.

As for DOE stepping in to fund projects that the private sector won’t, Zycher said the lack of private interest is a feature, not a bug, of the free market. "The fact that the market is not investing in certain things does not make it a market failure," he said.

Paul Bledsoe, a former Clinton White House adviser on climate change who now runs the policy firm Bledsoe & Associates, argued that DOE’s clean-tech investments are a good idea, even if most of them don’t pan out.

"This is a fundamental contradiction of the way these programs are analyzed and judged by many on Capitol Hill," he said. "We have to tolerate a good amount of failure, or we won’t be seeing breakthroughs."

As for putting people to work, Bledsoe said DOE’s post-recession strategy has paid off more in science than in employment. "I think that the whole green energy jobs thing was overstated from the start," he said. "I think it was more a slogan more than it was a programmatic directive."

The main question is whether the next administration will take the reins of DOE’s clean-tech portfolio with the same rigor as President Obama, even without a financial crisis to spur it and perhaps without the same concerns about climate change.

Danielson said he is optimistic about the momentum EERE has built up. "We’ve been lucky at EERE to enjoy some pretty strong bipartisan support on the Hill. Our budget has increased by about 22 percent," he said. "My experience is success breeds sustainability."