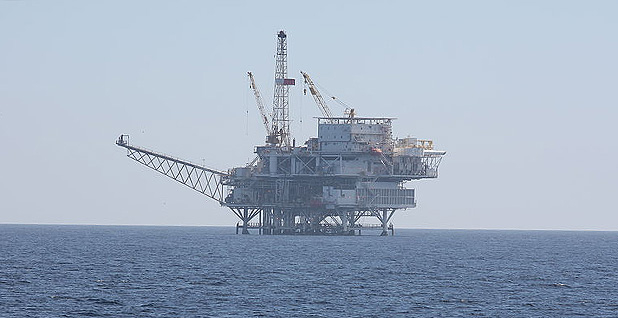 An Atlantic ban would keep drilling rigs away from the east coast. Pictured here is an oil platform in the Santa Barbara Channel. Photo courtesy of Wikipedia.

President Obama is expected to soon ban future drilling in parts of the Arctic and Atlantic oceans, using an obscure provision in the Outer Continental Shelf Lands Act that could permanently protect the area.

The move would be unprecedented. Only a handful of presidents have used the law to withdraw federal waters from oil and gas drilling, and none has tried to permanently protect such a large swath of ocean.

The White House declined to comment, but several sources said an announcement is imminent. It’s unclear how much of the Arctic and Atlantic Obama will withdraw from future oil and gas leasing. Bloomberg has reported that the ban would apply to most of the Chukchi and Beaufort seas, as well as parts of the Atlantic.

Environmentalists were already tentatively celebrating this morning. They say that by using Section 12(a) of the OCSLA, Obama makes it difficult for President-elect Donald Trump to open the area back up to drilling. The OCSLA explicitly allows presidents only to withdraw waters; it does not include language allowing presidents to reverse such withdrawals (Greenwire, Sept. 27).

"If President Obama acts to permanently protect important areas of the Atlantic Ocean from offshore drilling, he will be making a good decision, a smart business decision, based on science and facts," Jacqueline Savitz, Oceana’s senior vice president for the United States, said in an email. "This decision would help to protect existing lucrative coastal tourism and fishing businesses from offshore drilling, which promises smaller, short-lived returns and threatens coastal livelihoods."

Congress could pass legislation to open the area back up to drilling activity. But experts say it’s uncertain whether Trump could undo the protections unilaterally.

"No president has ever rescinded an open-ended reserve under this, and so there’s no litigation history," John Leshy, who served as Interior’s top attorney during the Clinton administration, said earlier this year. "Nobody knows the answer because it’s never been tried."

Environmental groups have waged a monthslong campaign to persuade Obama to use Section 12(a) to protect all Atlantic and Arctic waters. Obama used the provision earlier this month to withdraw 40,000 square miles of the Bering Sea "for a time period without specific expiration" (Greenwire, Dec. 9).

The Interior Department has already removed Atlantic waters and the Beaufort and Chukchi seas from its five-year oil and gas leasing plan. In doing so, Interior Secretary Sally Jewell cited the "unique and challenging Arctic environment and industry’s declining interest in the area." The plan kept one lease sale in Alaska’s Cook Inlet (Greenwire, Nov. 18).

Trump can redo that plan once he enters office. But if Obama uses his powers under the OCSLA, he will have stepped out of the rulemaking process and into murkier legal waters.

A weak oil price has led to the oil and gas industry’s declining interest in offshore drilling. But the industry has argued that taking the Arctic and Atlantic regions off the table drives exploration to other countries with fewer regulations.

A poll by environmental groups earlier this year showed that most Americans support permanent protections to end drilling in the Atlantic and Arctic oceans (E&E News PM, Oct. 13).

But the Arctic Energy Center, backed by the Alaska Oil and Gas Association and the Independent Petroleum Association of America, released a poll today in anticipation of Obama’s decision. Conducted by FTI Consulting, the poll of 511 Alaskans showed that 76 percent support offshore oil and gas resource development. The poll has a margin of error of 4.4 percentage points.

Spokesman Lucas Frances said the poll shows there is local support for drilling.

"Taken with last week’s news that sales of Beaufort Sea and North Slope leases generated $18 million, it is hard to avoid the conclusion that the Obama administration is playing politics with the future of Alaska," he said.