Obama made big promises to the world. Can Trump spoil them? 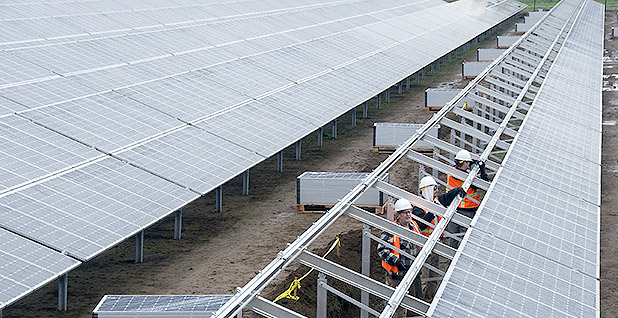 Months ago, Obama administration officials told the global community not to worry when Donald Trump was elected president. They insisted that the markets — for things like clean power and electric cars — would continue to drive the United States toward its climate commitments.

But early indications suggest that the economy won’t deliver on its own, even as analysts are poring over Trump’s anti-regulatory plans and their potential impacts on the climate promises made by the United States in Paris two years ago.

"You need policy action to keep driving emissions reductions, not just in the power sector but in particular in transportation — which is the second-largest-emitting sector — and in industry," said John Larsen, a director at the Rhodium Group. "And at the moment, that doesn’t look like it’s in the cards."

The United States’ nationally determined contribution to Paris pledges to cut emissions between 26 and 28 percent compared with 2005 levels by 2025. Analysts say that while nonfederal policies and the markets might deliver Obama’s near-term promise to cut emissions 17 percent by 2020, the bigger goals included in Paris could be out of reach without the help of a dedicated president.

"I think that’s an awfully rosy scenario to think we could get there just on the basis of market trends and state policies," said Elliot Diringer, executive vice president of the Center for Climate and Energy Solutions.

That’s the scenario Obama officials seemed to be selling to worried international onlookers in the waning days of the administration.

"I can tell you with confidence that right now, today, we are on our way to meeting all of the international targets that we’ve set," former Secretary of State John Kerry told a packed briefing room at the U.N. conference in Marrakech, Morocco, in November, days after it was rocked by Trump’s surprise win. "And because of the market decisions being made, I do not believe that that can or will be reversed."

If the United States fails to meet its promises, greens warn that it could undermine U.S. credibility on a host of international issues. It would also make the Paris goal to keep warming well below 2 degrees Celsius all but impossible, resulting in a dangerous future climate, they say.

Not that success under the Paris framework was assured even with Obama’s policies. Former Obama officials routinely characterized the agreement as a starting point for future action.

Larsen’s analysis of Obama’s regulatory regime found that it would have delivered, at maximum, a 22 percent cut in emissions relative to a 2005 baseline. Critics of the Paris Agreement took an even dimmer view. Stephen Eule of the U.S. Chamber of Commerce’s Institute for 21st Century Energy estimated in 2015 that the United States would deliver only 45 to 49 percent of the goal.

David Bookbinder, of the consulting group Element VI, who is now with the libertarian Niskanen Center, also estimated in 2015 that Obama’s policies would result in a 16 percent reduction relative to 2005 levels by the time the Paris pledge came due.

So it would have fallen to the next administration to tighten rules and perhaps bring more economic sectors under regulation, if the goals of Paris were to be met.

Utilities in general had a muted response to the Clean Power Plan, which most projections showed they could comply with fairly easily. But Bookbinder said that his discussions with EPA personnel led him to believe the agency would release a tougher "Clean Power Plan 2.0" if the Supreme Court upheld the more lax Obama-era rule, which was frozen by the high court 13 months ago.

But the rule does affect the amount of carbon dioxide that is released into the air. The U.S. Energy Information Administration released a report in January showing that without the Obama-era power rule, the sector would stop delivering new emissions cuts.

Even critics see its potential for driving down carbon emissions. The U.S. Chamber’s Institute for 21st Century Energy estimated in a 2016 blog post that eliminating the Clean Power Plan alone would cause the United States to fall 63 percent short of its Paris target.

Now, with Trump in office and Republicans in control of Congress, the Clean Power Plan’s demise is all but certain. Restrictions on methane and other regulations are also on the chopping block, as the administration seeks ways to expand fossil fuel development.

"We are going to move further away from Paris, and there will be no regulatory programs, as opposed to modest ones under Obama and a whole lot more under Clinton," said Bookbinder.

Automakers, for example, now hope the Trump administration will soften fuel economy standards that were constructed with their agreement under a deal with Obama. And greenhouse gas rules for manufacturing and petroleum refining that remained on EPA’s long-term list of priorities under Obama seem to be off the table.

With those current and future rulemakings gone, Larsen says markets and nonfederal policies could deliver a 16 percent cut, maximum, to 2005 levels of emissions by 2030.

Bookbinder points to EPA’s latest greenhouse gas inventory released on Feb. 17, showing that natural carbon sequestration "sinks" are about half what was previously estimated.

Taking that into account, he predicts the United States under Trump will now be able to achieve an 8 percent cut by 2025. "Not pretty," he said. Eule puts it at 7 percent, or even lower.

Still, proponents of climate action remain bullish about what the market can deliver, especially if it’s helped along by state policies and global trends.

Sue Reid, vice president of climate and energy programs at the investor group Ceres, said that global companies like Wal-Mart Stores Inc. see benefits in addressing emissions concerns in the United States, because it helps them do business in regions with steadier carbon regimes, like the European Union.

There is also a public relations upside for taking voluntary action. Mars Inc. and Google discovered that when they recently promised to find 100 percent of their operating power from renewable energy.

"What we’ve seen and heard in terms of the private sector stepping up creates great potential for keeping us largely on track in terms of emissions reductions, because companies and investors get the value proposition," Reid said.

She suggested that the rise of the Trump administration might spur some corporations and states to do more to combat climate change than they otherwise would, making up some of the deficit toward the Paris commitment.

"It’s really hard to know that delta because of some of the collateral and silver lining effects of other entities stepping up in part because of the risks that have been put on the table," Reid said.

"But because that’s only a coaliton of the willing and it’s not likely to expand beyond, say, half of the states at the moment, we have more to do — which is why we needed the Clean Power Plan," she said.

Dan Reicher, executive director at the Steyer-Taylor Center for Energy Policy and Finance at Stanford University, said Trump’s team would find it politically difficult to take on green technology interests, given that sector’s growth over the past five years — particularly in red-leaning states.

"We run a real risk of cutting it off at the knees if you’re not careful about how we implement important pieces of clean energy policy at the federal and state level," he said.

State efforts to retain nuclear capacity will also play a major role in the U.S. carbon trajectory, he added — and one in which the federal government does not have a leading role.

Is the Paris gap a reflection on Obama?

Kerry was far from the only Democratic official to predict after the election that the United States would stay on track to meet its Paris commitments.

He and others say an extension of the tax credits for wind and solar power generation in December 2015 will contribute to decarbonization, along with consumer preference for efficient products and policy signals in states and around the world.

Brian Deese, then a senior adviser to Obama, also said at the Marrakech talks that the Obama team felt "quite confident in looking at the trajectory of emissions reductions in the near term and confident that that will persist going forward." Former Vice President Joe Biden told a Canadian audience in December that reductions were no longer dependent on government initiatives.

Sen. Ed Markey (D-Mass.) concurred in a recent interview with E&E News. "Yes, we’re going to have a federal government which is loaded with climate deniers, but at the same time, much of the progress that has been made has been at the state level," he said.

Meanwhile, the Trump administration is thinking about doing away with the 26-to-28-percent goal altogether as one option for backing out of Paris.

That move would seem to validate the advice that opponents to Paris provided on the eve of the deal. Staffers for Senate Majority Leader Mitch McConnell (R-Ky.) and others warned some officials in foreign embassies to take Obama’s promises with a grain of salt. They suggested that those promises weren’t rooted firmly in politics or the law.

Robert Dillon, head of communications for the American Council for Capital Formation Center for Policy Research, which participated in the embassy briefings, said the Obama administration was to blame for writing a check it couldn’t cash when it submitted the nationally determined contribution in 2015.

"To argue that the United States must now make good on that bad check without changes to protect its competitiveness is simply irresponsible," said Dillon.

Still, it’s unlikely that Obama’s climate legacy will be tarnished by Trump’s actions, some observers say.