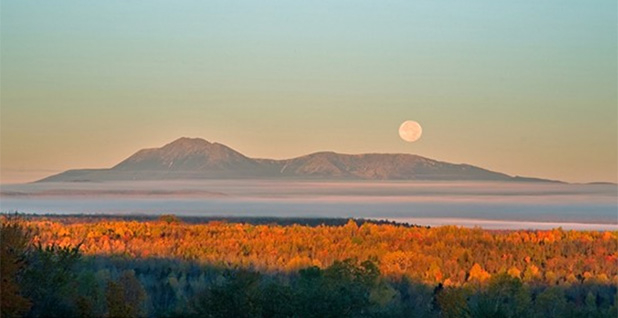 President Obama today officially protected over 87,500 acres of forests and streams in central Maine as the Katahdin Woods and Waters National Monument.

The monument is now the 413th unit in the national park system. It was created through Obama’s 25th use of the Antiquities Act, a controversial 1906 law that allows the president to protect sites of historical or scientific significance without the approval of Congress.

Katahdin Woods and Waters is located directly east of the 209,600-acre Baxter State Park, which is home to Mount Katahdin, the northern terminus of the Appalachian Trail. Within the monument’s boundaries are 4,426 acres of private land owned by a timber company that the Obama administration said could eventually be incorporated into Katahdin Woods and Waters on a willing-seller basis.

The monument was donated yesterday to the federal government by Roxanne Quimby, co-founder of the personal care products company Burt’s Bees, in spite of significant congressional and local opposition (E&ENews PM, Aug. 23).

The gift comes with an endowment of $20 million to supplement federal funds for initial park operations and development, as well as a pledge of another $20 million in future philanthropic support, the White House press office said today.

"Katahdin Woods and Waters is an exceptional example of the rich and storied Maine Woods, enhanced by its location in a larger protected landscape, and thus would be a valuable addition to the Nation’s natural, historical, and cultural heritage conserved and enjoyed in the National Park System," Obama wrote in a proclamation establishing the monument.

"The area likely contains the attributes needed to sustain natural ecological function in the face of climate change, and provide natural strongholds for species into the future," he added. "These forests also afford connections and scientific comparisons with the forests on adjacent State land, including Baxter State Park, which was logged heavily before its parcel-by-parcel purchase by former Governor Percival Baxter between 1931 and 1963."

The nine-page proclamation drew comparisons between the opposition to the creation of the state park, which is now widely revered, and the national monument. It also detailed the area’s significance to Native Americans, the timber industry, sportsmen, artists and authors like Henry David Thoreau, as well as its varied geology, biodiversity and scenery. For example, the area is home to the federally threatened Canada lynx and could once again provide habitat for endangered Atlantic salmon, it said.

The proclamation upholds agreements Quimby struck with snowmobilers and hunters — a key concern of some monument opponents.

The designation is a major victory for Quimby and her son, Lucas St. Clair, who last year shifted the family’s focus toward protecting the land as a monument instead of a congressionally created national park. The distinction between the two categories of National Park Service sites does not affect how they are managed, though the term national park is more widely recognized by the general public.

St. Clair, who runs the family’s Elliotsville Plantation nonprofit, said in an interview that he may resume the push for legislation to change Katahdin Woods and Waters to a national park after the 2016 elections.

"We’re going to let the dust settle," he said. "We’re going to get through this next election and see what happens. Hopefully we’ll see an opportunity for more collaboration."

But, St. Clair added, "I haven’t had conversations yet with our congressional delegation to hear their thoughts."

He also dismissed congressional Republicans’ criticism of the new monument. For example, House Natural Resources Chairman Rob Bishop (R-Utah) said in a statement today that "if the President cared about local voices and improving our National Park System, he would have done this through the public process and not behind closed doors."

St. Clair said of GOP member of Congress: "I can imagine that they’re disappointed in the process, but I think over time they’ll realize that this is a tremendous gift — a tremendous amount of generosity from my mother to the American public."

In regards to Bishop in particular, he added that, "he doesn’t like the Antiquities Act, and that’s not his preferred way of protecting land. But it’s a legal way to do it, and so we’re excited that the president and many others are recognizing this as a crown jewel of America’s natural resources."

The monument designation was widely praised by national conservation and sportsmen groups.

To maximize the economic benefit to communities hard hit by the decline of the timber industry, the National Park Service is moving quickly to make the monument a success, according to St. Clair. The agency is opening offices in the former mill towns of Millinocket and Patten — both of which opposed the designation — and has already launched a website for Katahdin Woods and Waters and printed brochures and maps for the park.

"We’re up and running," said St. Clair, whose nonprofit will also work with NPS to build infrastructure and raise awareness about the monument. "We have local construction teams from Millinocket and Milo that are re-decking bridges and improving roads. So there have already been benefits to the local communities in just the infrastructure additions that are happening now."