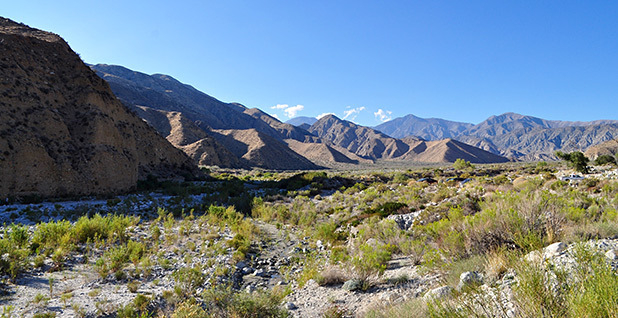 The three monuments — Mojave Trails, Sand to Snow and Castle Mountains — extend from just north of Palm Springs to the Nevada border.

They include rolling desert lands, mountain ranges, Joshua and juniper trees and prehistoric lava flows, as well as habitat for 240 species of birds and 12 threatened and endangered species.

The designation shields the land from any new mining and other industrial activities, including solar and wind farms.

"The California desert is a cherished and irreplaceable resource for the people of southern California," Jewell said in a statement. "Today’s designation by the President furthers the longstanding work of public land managers and local communities to ensure these areas will remain preserved and accessible to the public for future generations."

Obama’s decision is the culmination of six years of work by California Sen. Dianne Feinstein (D). She has introduced several bills that would establish the monuments, only to be repeatedly blocked in Congress.

Frustrated by the gridlock, she began pressing Obama last August to use his authority under the 1906 Antiquities Act to designate the tracts.

Feinstein has emphasized that she has preferred that designations come through legislation. But she said today’s announcement is a major milestone.

"I’m full of pride and joy knowing that future generations will be able to explore these national monuments and that the land will remain as pristine and as it is today," she said in a statement. "To a city girl like me, this expanse of desert, with its ruggedness and unique beauty, is nothing short of awe-inspiring."

The Antiquities Act authority, however, is strongly opposed by conservatives who say the president should not create monuments by executive action.

Those tensions were on display at a steamy, sweaty public hearing on the monuments last October near Palm Springs. Obama had dispatched senior officials from the Interior and Agriculture departments — a key sign that he was seriously considering the monuments — and they were greeted by protesters with signs reading "No Antiquities Act!" and "The Public Deserves a Vote!" (Greenwire, Oct. 14, 2015).

California Republicans in particular have opposed Obama’s stepping in to make the designations. Rep. Paul Cook (R) introduced competing legislation to Feinstein’s that would allow mining activities in the areas and bar designations under the Antiquities Act, two provisions that environmental groups strongly opposed.

Cook also pointed to another California monument designation — the San Gabriel Mountains National Monument in 2014 — as showing how the Forest Service was unprepared for the influx of visitors that resulted.

Obama has been increasingly active in using the Antiquities Act as a tool for conservation. In addition to the 2014 California designation, he has created large new monuments in Nevada and New Mexico.

In total, he has designated 22 national monuments. The White House said he has protected 265 million acres of public lands and waters, the most of any president.

The new California monuments stretch across large swaths of desert in the southeastern part of the state. They include Native American trading routes, World War II training camps, a particularly biodiverse mountain area, a section of the Pacific Crest Trail and the longest remaining undeveloped stretch along Route 66.

Many local and environmental groups were quick to cheer the White House’s announcement.

David Myers, executive director of the Wildlands Conservancy, a local nonprofit that has pushed for the designations for more than a decade, said the designations "preserve the heart of the Mojave Desert" and are the "pinnacle of a 15-year effort."

"Latinos have such an important voice in the protection of our public lands, and a critical role to play in encouraging stewardship of our outdoor and cultural heritage," said Maite Arce, president of the Hispanic Access Foundation. "Today’s historic action not only ensures continued public access to these places and enhances the local tourism and outdoor economies, but it also strengthens the diverse social fabric of the region."

And Helen O’Shea of the Natural Resources Defense Council added that "protecting these fragile lands is an absolutely essential element of an overall vision for California’s desert — a vision that includes both conservation and renewable energy development in the right places."