Obama takes the offensive at COP 26 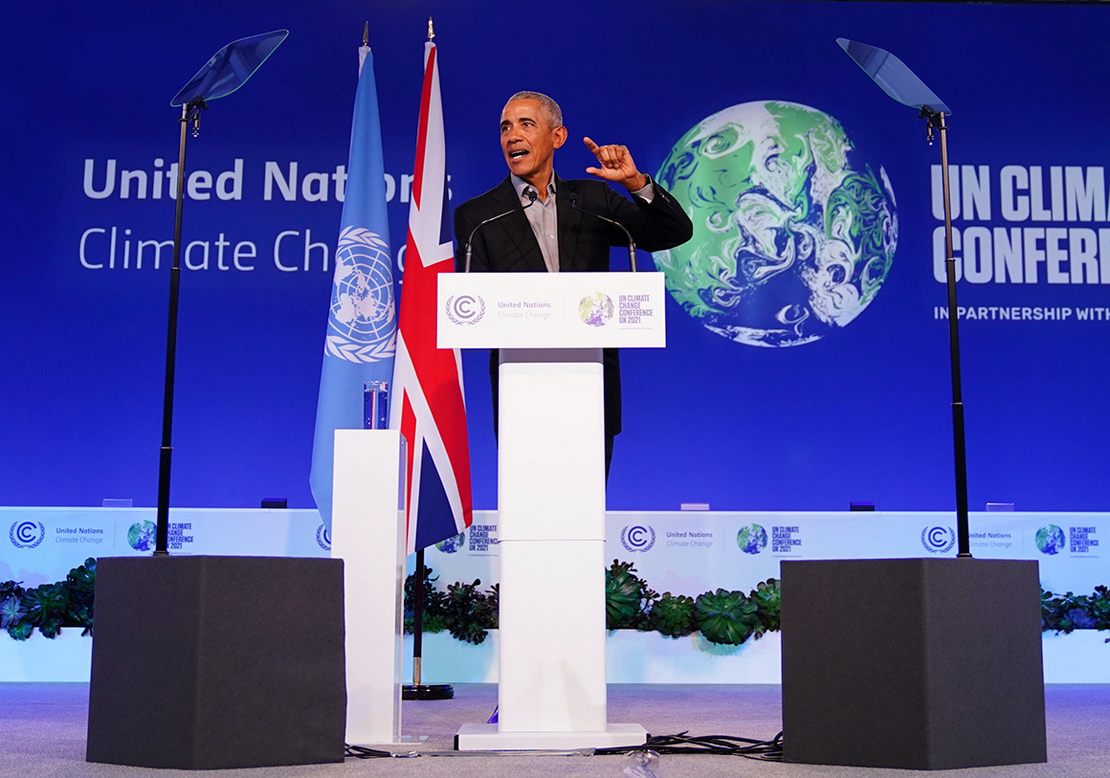 Former President Obama today took aim at Russia, China and Republicans, blaming them for standing in the way of global efforts to stem runaway warming in remarks at United Nations climate talks in Glasgow, Scotland.

The former president joked as he took the stage in the conference’s plenary hall that as a private citizen he was allowed to speak without wearing a necktie. But he also shuffled off the typical constraints on heads of state who downplay political and geopolitical divisions in favor of diplomacy.

He called out Chinese President Xi Jinping and Russian President Vladimir Putin for skipping the conference known as COP 26, which is now entering its crucial second week. And he blamed them for failing to issue sufficiently ambitious new commitments to the Paris Agreement.

China, which is responsible for 28 percent of global greenhouse gas emissions, issued a modestly updated nationally determined contribution, or NDC, on the eve of the Glasgow talks. It did not move forward its now 7-year-old commitment to cap emissions by 2030, something many observers hoped to see (Climatewire, Oct. 29).

President Biden in remarks to COP 26 last week avoided calling out individual countries, as is common for sitting presidents. But on the sidelines of the talks, he told reporters that Xi and Putin had made a “big mistake” by skipping the confab — the most important climate conference since the 2015 summit that delivered the Paris deal.

The Chinese delegation, for its part, has questioned how Biden plans to make good on his pledge to halve U.S. emissions this decade if Congress doesn’t act.

Chinese Foreign Ministry spokesman Wang Wenbin implied to reporters that the Biden administration was offering “empty words” instead of actions. And POLITICO reported that Chinese climate envoy Xie Zhenhua, in a meeting with the U.S. delegation, blasted the U.S. for withdrawing from the compact and questioned its ability to deliver Biden’s target.

“I think there’s a little tit for tat here,” said Alden Meyer, a senior associate with E3G. “It’s not helpful to this overall — to getting a deal next week, to have the two biggest economies and emitters in the world at odds with each other and criticizing each others’ motives.”.

Sen. Ben Cardin (D-Md.) a senior member of the Senate Foreign Relations Committee who led a delegation to Glasgow over the weekend, told E&E News that democratic countries understood the political limitations the Biden administration faced.

“Those who disagree with our system of government are clearly going to capitalize on that and be naysayers,” said Cardin. “We want China to be an active part of the climate solution. And we’re going to be meeting with them and working with them.”

As negotiations on a COP decision enter their second week, Chinese and U.S. negotiators are clashing on how countries will report their emissions and mitigation progress under the Paris Agreement. China is demanding increased flexibility for poor countries in what the U.S. sees an attempt to renegotiate aspects of the Paris deal, which broke down most of the traditional divisions between developed and developing countries’ responsibilities.

“Thinking back on my own experience as president, I would have had the power to do even more to fight climate change during my time at office if I’d had a stable congressional majority that was willing and eager to take action,” he said. “And for the bulk of my presidency, I didn’t have that majority.”

The former president said governments do more to address climate change when citizens “turn their passion into votes.”

Obama spoke as Biden, his former vice president, prepares to sign bipartisan infrastructure legislation that features some climate provisions. Democrats on Capital Hill continue to search for a way forward on a much broader set of clean energy and emissions-reduction incentives that would move together with social spending and help secure Biden’s commitment to cutting greenhouse gases.

Obama said he welcomed “any faction within the Republican Party in the United States that takes climate change seriously,” but added that that was a “rare breed,” especially now.

The weekend saw a congressional delegation of Republicans visit the conference, including Rep. John Curtis (R-Utah), who heads the Conservative Climate Caucus.

“Republicans care deeply about this Earth and about our stewardship,” Curtis said during a Saturday event at the conference venue. “We may not have learned how to talk about it. We may have allowed ourselves to be branded as not caring. But I promise you, we care.”