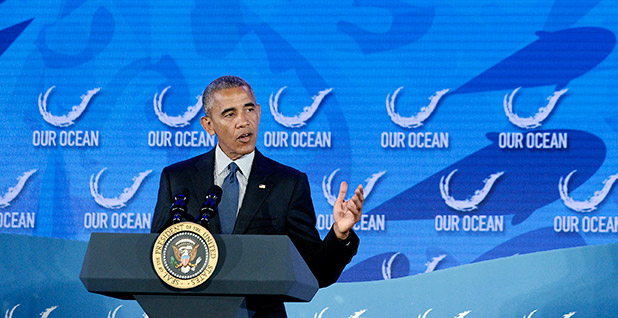 President Obama speaks at the Our Ocean conference at the State Department yesterday. He established the first national marine monument in the Atlantic Ocean. Photo courtesy of AP Images.

President Obama told representatives of 90 countries yesterday that taking steps to safeguard the world’s oceans is crucial in a warming world.

Speaking at the third annual Our Ocean conference, hosted this year by the State Department in Washington, D.C., Obama urged action to relieve stress on the world’s oceans as they cope with climate change.

"Our conservation efforts and our obligations to combat climate change, in fact, go hand in hand because marine areas already have enough to worry about, with overfishing and ship traffic and pollution — like those patches of plastic waste floating in the Pacific and the invisible pollutants like carbon that we cannot see," he said. "The more of those threats that we eliminate through conservation, the more resilient those ecosystems will be to the consequences of climate change."

Without healthy oceans, Obama said, the objectives of last year’s Paris Agreement will be harder to achieve. And with more than 500 ocean dead zones around the world, the seas are currently under stress.

"The problem that confronts all of us today is that we’re asking far too much of our ocean in asking it to adapt to us," Obama said.

Stresses like land-based pollution and overfishing compromise the ocean’s ability to regulate the climate. Seas have absorbed about 30 percent of the carbon dioxide released in the atmosphere since the beginning of the Industrial Revolution and as much as 90 percent of excess heat over the last few decades, according to scientists. That has contributed to higher acidity, fish migrations and rising tides.

Secretary of State John Kerry warned the conference, attended by foreign ministers from around the world, "If that unraveling continues much longer, a significant chunk of marine life may simply die out because it can no longer survive in the very waters that have nourished it since time began."

About 3 percent of the world’s oceans is now under protection, but Obama said more will be needed if the next generation is to experience a healthy ocean.

"It is going to require work. It is going to require vision. It will require occasional sacrifice," Obama said. "But as long as we make sure that the sacrifices are not borne just by a few people but are spread broadly and fairly and justly, then my hope is, is that my children and your children and our grandchildren, they’ll be able to take that trip to Midway [Atoll] at some point, and they’ll be able to watch seals swimming through water."

Concerns about the monument and fishing

"This proves once again that he is more interested in leaving his legacy with radical environmental groups than creating American jobs," Bishop said in a statement. "President Obama will certainly leave his legacy — on the backs of fishermen and our entire domestic seafood supply."

The designation had local opposition, too. Jon Mitchell, mayor of New Bedford, Mass., wrote a letter to White House officials last month opposing the creation of the Northeast Canyons and Seamounts Marine National Monument on the grounds that it would adversely affect his community’s fishing industry. But the White House says it responded to those concerns by reducing the scope of the monument. Fishing operations that currently hold permits for the area will have seven years to stop operating there.

The Our Ocean conference began two years ago under Kerry, who reminded the audience yesterday that he and the president share a personal connection to the ocean that dates to their childhoods. Obama was born in Hawaii and raised in Indonesia, and Kerry grew up sailing with his father off the coast of Massachusetts.

"So for me, and I know for you, for literally billions of people around the world, that connection with the ocean is not just emotional, not just a question of admiring something glorious and unique, it is also existential," Kerry said.

The oceans provide a financial living for 12 percent of the world’s population, and many more live along their coastlines. Mitigating ocean damage and climate change is essential to protecting both, Kerry said.

"If you look at the areas that have been protected, what essentially you do with those is you add a layer of additional support for things that are threatened," he said. "You start to see things regenerate."

The president’s marine monument designation was one of more than 100 actions by state and non-state actors to be rolled out during the two-day summit, which ends today. Also yesterday, the United Kingdom pledged to ban commercial fishing from 1 million square kilometers of ocean around the British overseas territories. This includes a designation around the island of Pitcairn in the South Pacific, which was settled by the sailors who mutinied on the Bounty in 1789. The island is still populated almost exclusively by their descendants.

Actor Leonardo DiCaprio visited the conference to unveil a new online tool from Google, Oceana and SkyTruth that will allow the public to monitor fishing vessels around the world. And Costa Rica announced that it will expand the protected waters of Cocos Island National Park by almost 10,000 square kilometers, among other offerings.

A State Department conference room was festooned with a nautical theme for the occasion, with jellyfish and whale ribs hanging from the walls and a giant statue of Neptune as a centerpiece. Organizers incorporated film, music and other media into the event’s planning.

‘Astonished’ by the absence of Paris

Pershing and Kerry are preparing to travel to New York next week for a U.N. summit aimed at helping the Paris deal enter into early force. Obama will visit U.N. headquarters Tuesday for a summit on migration, but it is unclear whether he’ll stay for Wednesday’s high-level meeting on the Paris deal.

The Paris Agreement notes "the importance of ensuring the integrity of all ecosystems, including oceans." But only a handful of countries, including Mexico, mentioned oceanic protection explicitly in their commitments to the agreement.

Morocco’s environment ambassador, Hakima El Haite, told ClimateWire that she was "a bit astonished" at how infrequently Paris was invoked at yesterday’s gathering.

"Let me tell you something. We can’t dissociate this discussion from the process of the [climate talks]," she said in an interview. "We can’t only launch a new kind of conference to discuss oceans. Oceans are really linked to climate and to all these mobilizations around climate."

Noting the importance of safeguarding oceans as part of Paris, El Haite said the deal agreed to by nearly 200 countries last year provides a moral obligation for nations to act.

El Haite, who with France’s Laurence Tubiana serves as "champion" of the Global Climate Action Agenda, is looking for ways that countries can incorporate ocean protections into the basic building blocks of Paris — the so-called nationally determined contributions (NDCs).

These national pledges, while not legally binding, are subject to mandatory transparency provisions. Adding ocean protections to those commitments will raise their profile and make countries more accountable, she said.

"Let’s put everything inside a mechanism we committed to already, which is the Paris Agreement," she said.

The Moroccan government is preparing to host the next round of climate talks in Marrakech in November and will dedicate one day during the conference to oceans. El Haite said she hopes that event is seen by countries worldwide as the time to add ocean protection into their formal commitments.

Chilean Foreign Minister Heraldo Muñoz, who hosted last year’s Our Ocean conference, is also pressing to give it a bigger role within the Paris accord.

"Conserving the ocean can be seen for what it is; it’s a savings account and a fundamental instrument to cope with climate change," he said.

Chile worked with France, Monaco and other countries to secure a mention of oceans in the agreement text last December.

"Now we’re confronting Marrakech, and because in Paris we agreed on the NDCs, we feel that conserving the ocean should be a component of those contributions assented by member states," Muñoz said.

Chile hosted a workshop earlier in the week with National Geographic at which experts began to consider how to accomplish that goal. They’re considering offering guidelines to countries that are willing to make ocean commitments a part of their NDCs and weighing whether to put forward a unified goal for ocean protection, he said.

Chile, France and Monaco sponsored the "Because the Ocean" declaration in Paris, which calls for the sustainable management of oceans. Twenty-four nations have signed it.