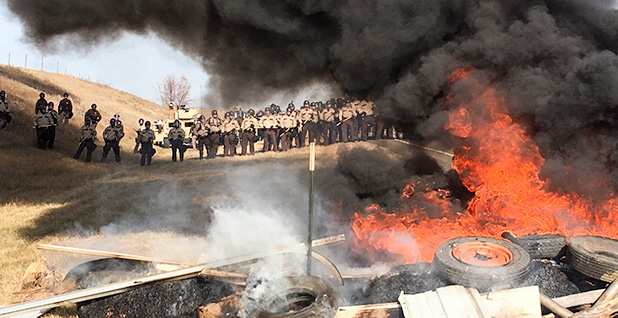 President Obama last night said the government is examining rerouting the Dakota Access oil pipeline, which has sparked massive resistance across the United States. Here law enforcement officers near Cannonball, N.D., stand guard along a state highway as a fire burns in the foreground. Photo courtesy of AP Images.

President Obama signaled yesterday that the Army Corps of Engineers is weighing options for rerouting the contentious Dakota Access oil pipeline to protect lands that Native Americans consider sacred, but experts say the administration is facing a very heavy lift.

"Making a significant reroute at this point — either by the order of the government or agreement of the parties — would be difficult," said Van Ness Feldman LLP attorney Edward Gehres, who leads the firm’s tribal practice.

Obama waded into the national fight over the Bakken Shale pipeline during an interview with the video news organization NowThis News, revealing the Army Corps is looking at rerouting options that would be "attentive" to tribal tradition.

The administration, he said, is going to "let it play out for several more weeks." Meanwhile, Obama said, he’s closely monitoring tribes’ and environmentalists’ opposition to the oil pipeline and looking for a way to "accommodate sacred lands."

Gehres said the president’s comments weren’t surprising given the Obama administration’s careful approach to energy projects and tribal consultation, but he noted that much of the 1,172-mile-long, $3.8 billion pipeline has been constructed and undergone a federal routing process that accounts for geographic, geologic and environmental concerns.

Central to the debate is the administration’s decision in September to withhold final approval needed by Dallas-based Energy Transfer Partners to finish building the oil pipeline across Lake Oahe, a dammed reservoir on the Missouri River. Although the Army Corps said then it would decide in "weeks, not months," no decision has been made.

Vicki Granado, a spokeswoman for Energy Transfer Partners, said the company was unaware of any consideration being given to a reroute. "We remain confident we will receive our easement in a timely fashion," she said.

Yet Obama’s remarks and overall decision to wade into the fight in North Dakota have emboldened climate activists and tribes concerned about the safety of their drinking water reserves and sent shock waves through an oil and gas industry intent on expanding the nation’s pipeline network to tap a glut of domestic oil and gas.

It’s also left legal experts scrambling to understand what once appeared to be a routine permitting process.

In what’s slowly shaping up to be an exercise in reading political tea leaves, Maranda Compton, an of-counsel attorney at Van Ness Feldman, laid out the possible paths forward but said the unprecedented nature of the case makes predictions tough.

The Army Corps, sources said, could take the highly unusual step of refusing to grant the easement, throwing the pipeline project in jeopardy.

Or the agency could reopen its environmental assessment and reroute the project, Compton said.

Any new environmental issues that surface or undiscovered or previously unidentified cultural resources — such as human remains or historic artifacts — could provide a basis for a supplemental environmental assessment or, less likely, a full environmental impact statement (EIS), Compton said. An assessment would take a few months, whereas an EIS would require at last six months, she added.

Industry sources threw out yet another option, saying the Army Corps could grant the easement with conditions and use its leverage to extract an agreement out of Energy Transfer Partners. Any major reroute, industry sources added, would cost developers hundreds of millions of dollars.

The uncertainty shines a bright light on the current route of the Dakota Access pipeline and past routes the company considered.

The project has been rerouted many times throughout the planning process, most significantly moving a Missouri River crossing from the Bismarck, N.D., area to its current planned location, a half-mile north of the Standing Rock Indian Reservation. The Bismarck crossing passed through more heavily populated areas (EnergyWire, Nov. 2).

Given the political fallout that would accompany building the pipeline along its current route, many are looking for a compromise between the tribes and Energy Transfer.

"The Obama administration has done the right thing in halting this thing, so at least we have a cooling off period to reconsider the corps’ and government consultation process with Native Americans," said Tyler Priest, a professor at the University of Iowa who served as a senior policy analyst for the National Commission on the BP Deepwater Horizon Oil Spill and Offshore Drilling.

As Obama burnishes his legacy and outreach with tribes in the remaining months of his presidency, what’s more certain is the administration taking firm steps to improve tribal relations and respond to an unprecedented show of support at Standing Rock.

"The administration will try and resolve Dakota Access as best it can," Compton said, "but they have their eye on how to change the underlying process."

Gehres said Obama is keen on dealing with the permitting process for major infrastructure projects to ensure tribes feel they have a voice, adding that possible mechanisms include proposed legislation, regulations or other documents within the executive authority.