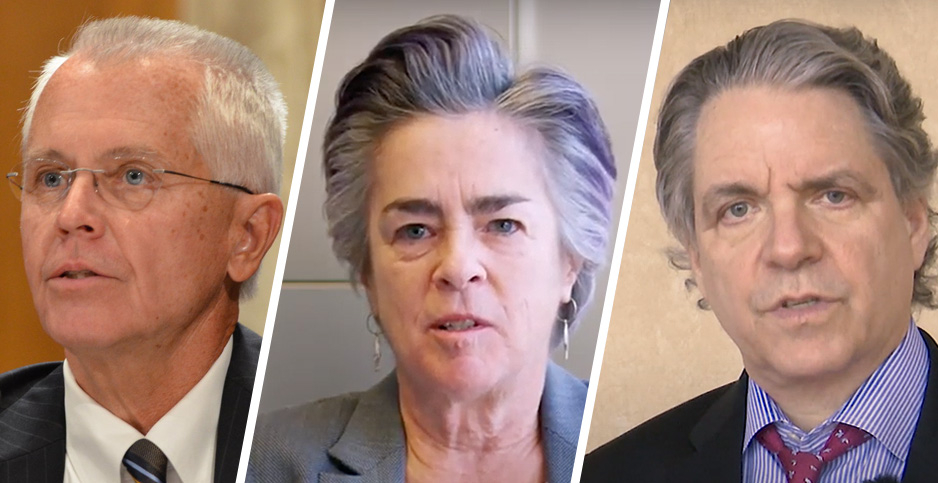 The band is getting back together.

Some of the highest-profile EPA officials of the Obama administration are regrouping as members of President-elect Joe Biden’s EPA transition team. The 12 members include several former officials who helped craft the agency’s most consequential regulations dealing with air, climate and water — most of which have been rolled back by the Trump administration.

Their expertise in the environmental world has not gone unnoticed at the agency.

"If you could look across some of the savviest officials from the last administration who worked really well together and worked really well with career staff, then this list is about as close to a dream team as you could get," an EPA employee told E&E News. "There are really only a small handful of folks I would want who aren’t on this list."

"This is a strong team with lots of expertise and experience," said Bob Sussman, who served at the agency as a deputy administrator and senior policy counsel and co-chaired President Obama’s EPA transition team.

One member of Biden’s team, Cynthia Giles, led EPA’s enforcement office for the Obama administration. She was the agency’s top cop on some of the biggest environmental enforcement cases in history, including the Deepwater Horizon oil spill and the Volkswagen emission-cheating scheme, resulting in billions of dollars in fines and settlement money.

Giles called nabbing VW the "best moment" during her time at EPA in an exit interview with E&E News (Greenwire, Jan. 20, 2017).

After leaving the agency, she joined academia and is now a guest fellow at Harvard Law School’s environment and energy law program. Giles has also been a critic of the Trump EPA, questioning its enforcement figures and budget numbers in analyses she has drafted.

"She knows the buttons that need to be pushed that have been unpushed in EPA," the agency employee said about Giles.

Joseph Goffman, another Biden team member, also was at EPA for much of the Obama administration. As a top aide on climate and air policy, he helped author the Clean Power Plan, the Mercury and Air Toxics Standards, the Cross-State Air Pollution Rule and other regulations.

He is now executive director of Harvard Law School’s environmental law program and has repeatedly blasted the Trump administration on his Twitter feed for its rollbacks of environmental rules.

Ken Kopocis, another Biden team member, led EPA’s water office during the Obama administration and helped write its Waters of the United States rule, which has since been replaced by his Trump successors with a more limited wetlands rule.

Sussman said the team can create an inventory of those regulations and evaluate whether they should be revoked or modified.

"These decisions would ultimately need to be made by the EPA administrator in consultation with the White House, but the transition team can facilitate the process through a comprehensive scoping exercise," Sussman said.

Myron Ebell, who led President Trump’s EPA transition team and is director of the Competitive Enterprise Institute’s Center for Energy and Environment, doesn’t believe those moves will survive in court.

"If they try again to use the Clean Air Act to regulate greenhouse gas emissions, then I think the new and improved Supreme Court makes it even less likely that they will succeed. I guess it’s good that they’ve got all those lawyers on the Biden team," Ebell told E&E News.

Also included on Biden’s agency review team for EPA are several past officials who served in and around the administrator’s office, giving them experience in the inner workings of the agency.

Matt Fritz, now at Latham & Watkins LLP, was EPA chief of staff to Administrator Gina McCarthy. In that role, he tangled with the Trump transition team, denying its requests for climate change records (Greenwire, Sept. 25, 2017).

Amanda Aguirre, who was EPA’s acting director of public engagement and environmental education from 2014 to 2016, and Luseni Pieh, who was a deputy EPA chief of staff from 2015 to 2017, are also on Biden’s team for the agency.

Biden’s team has a former acting EPA administrator as well.

A longtime aide to Biden, Michael McCabe served as EPA Region 3 administrator and then deputy EPA administrator at the end of the Clinton administration. He later spent 10 days as acting administrator before Christine Todd Whitman took charge of the agency in 2001.

The Intercept reported on McCabe’s work on behalf of DuPont defending the toxic chemical PFOA, but a transition spokesman said the former EPA official has committed to not take a position in the Biden administration.

Biden’s EPA team is led by Patrice Simms, Earthjustice’s vice president for healthy communities. Simms was a deputy assistant attorney general for the Department of Justice’s Environment and Natural Resources Division but also has EPA experience, having begun his career as an attorney in the agency’s Office of General Counsel and as counsel to its Environmental Appeals Board.

Marcus Peacock, who served as deputy EPA administrator during the George W. Bush administration, said "review teams are a mixed bag," estimating about one-third of their members return to their prior jobs while the other two-thirds stay at the agency.

"In my experience, it is unlikely agency heads, including EPA administrators, are part of the initial review team," Peacock, now chief operating officer for the Business Roundtable, told E&E News.

Eleven of Biden’s EPA team members are listed as volunteers, meaning they are helping out in their personal capacity. One team member, Billie McGrane with the Pennsylvania Democratic Party, is listed as a full-time paid transition employee.

With Trump disputing the 2020 election results, the head of the General Services Administration has not ascertained who is the "apparent" winner of the race. That means Biden’s transition team has not received more federal funds and access to agencies, including EPA.

Peacock, who was part of the Bush EPA transition team that was stalled after the 2000 election, said the Biden team’s expertise will help with that lack of access.

"I’d put it in the ‘moderate inconvenience’ category," Peacock said. "The experienced former EPA personnel they have on the transition team, a set of concrete environmental commitments the president-elect made during the campaign, and the informal relationships the team has with current EPA staff all help make the transition team’s job easier."

Once GSA ascertains the election results, Biden’s EPA team will work directly with agency staff, according to a transition team spokesman. Before that happens, the transition’s work continues and Biden’s review teams are meeting with former agency officials and experts to help prepare the incoming administration.

Sussman said there is value in "direct access" to EPA but that Biden’s team already follows the agency closely.

"I don’t think the team will have trouble developing strong recommendations, although there may be a few areas where EPA staff might provide useful information and insights," Sussman said.