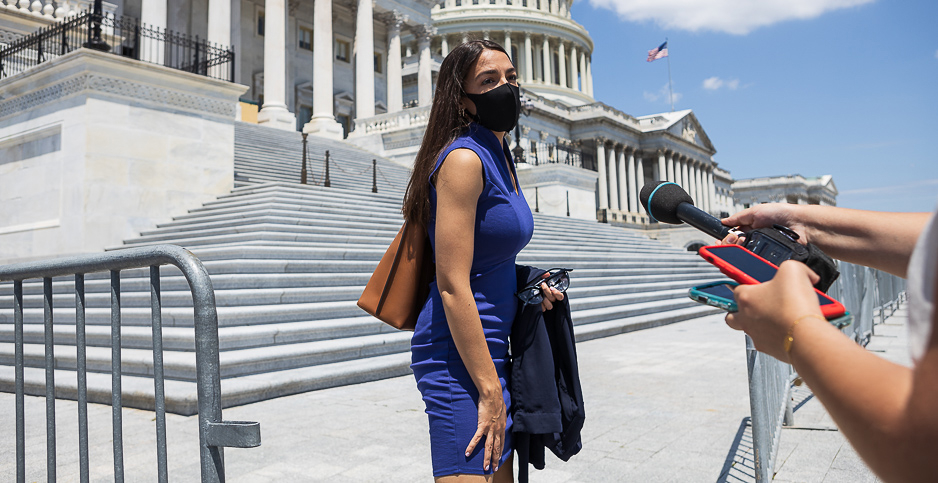 An amendment filed by Rep. Alexandria Ocasio-Cortez (D-N.Y.) to the Energy-Water title of the House’s second fiscal 2021 spending package has struck a nerve with the nation’s pipeline industry.

The amendment, submitted and made available for the public through the House Rules Committee website late last week, would add a policy rider to prevent the Army Corps of Engineers from using any of its $7.35 billion allocation to issue oil and gas pipeline permits under Section 404 of the Clean Water Act.

The Interstate Natural Gas Association of America warned yesterday that should the proposal move forward, it could put a stop to pipeline construction across the country, with potentially devastating effects to associated infrastructure needed to bolster manufacturing, heating and power production.

For Ocasio-Cortez and other progressive lawmakers, that is most likely the point, as they look to further undercut fossil fuel deployment to combat climate change. Ocasio-Cortez’s office did not return an email for comment on her amendment yesterday.

C.J. Osman, INGAA’s vice president of operations, safety and integrity, said in an interview with E&E News that the amendment could mean drastic problems for the pipeline industry, should it be made in order.

"This amendment is pretty concerning for our industry," Osman said. "It seems to amount to a ban to most new energy pipeline projects."

Osman added, "From our perspective, that would be incredibly disruptive both to American consumers’ energy affordability and their access to energy."

The Rules Committee will meet later today to consider the amendment, along with hundreds of others to the seven-bill spending minibus pending before the House floor this week (E&E Daily, July 27).

The amendment would prevent any permitting "for the discharge of dredged or fill material resulting from an activity to construct a pipeline for the transportation of oil or gas."

The implications from such language could be far reaching, INGAA said, but ultimately, it could gut the Army Corps’ ability to oversee its Section 404 responsibilities while still putting the onus on the industry to meet those requirements under the Clean Water Act.

The amendment could prevent the Army Corps from retooling its Nationwide Permit 12 program, which enables a more streamlined approach to approving pipeline construction pathways across multiple water and stream barriers.

A federal judge struck down the program in April, throwing the pipeline industry into chaos and stalling multiple projects (Energywire, April 27).

The Ocasio-Cortez amendment could also mean new and existing construction could not occur in fiscal 2021, putting in jeopardy upgrades to existing pipelines and deployment of new natural gas lines.

That could mean a reduction in energy affordability, grid reliability and construction jobs across the country — in Republican and Democratic districts.

"We believe that members of Congress on both sides of the political spectrum should be very concerned about this because there are impacts to communities across the country, and we have heard, frankly, from representatives, both Democrats and Republicans, that they have concerns with this legislation," Osman said.

"This is one of those things that has the potential to have broad impacts across the country — red, blue, purple, whatever you may be," he added.

Ocasio-Cortez has been adamant about her opposition to deploying additional fossil fuel infrastructure. She has opted instead for her Green New Deal to overhaul the economy with massive federal investment to transition to a climate-friendly future.

That has included a keen focus on pipelines. She fought against a Trump administration proposal to limit pipeline protests as part of reauthorizing the Pipeline and Hazardous Materials Safety Administration. Ocasio-Cortez protested the Dakota Access pipeline project.

Policy riders on appropriations bills are not without precedent in the House. Both parties use them to attempt to rein in perceived executive branch overreach or to ensure implementation of certain policy in a certain way.

House Republicans spent the majority of the 2010s using policy riders to lash out against Obama administration climate regulations. Democrats have done the same under the Trump administration related to his regulatory rollback agenda.

And Ocasio-Cortez’s amendment would not be the only rider targeting Army Corps operations. The bill already includes a rider to prevent any funding from going to the border wall construction and another provision limiting the ability to move its Civil Works program to an additional federal agency, among others.

With a Republican Senate, those policy riders are expected to be absent from any spending legislation enacted into law.