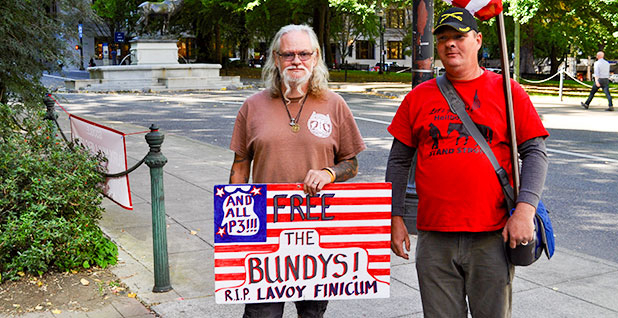 Supporters of Ammon and Ryan Bundy, who led the armed occupation of Malheur National Wildlife Refuge earlier this year, gathered outside the federal courthouse in Portland, Ore., yesterday as the Bundys' trial began. Photo by Jeremy P. Jacobs.

PORTLAND, Ore. — Occupiers of the Malheur National Wildlife Refuge
offered a variety of defenses in court yesterday, ranging from their religious beliefs to civil disobedience to "despotism" and the impending death of "rural America" due to federal lands policies.

Federal prosecutors yesterday opened their cases against seven defendants charged with conspiring to impede federal officers from doing their job through the use of force, intimidation or threats during the 41-day armed occupation that ended Feb. 11.

Several of the defendants also face charges of theft of government property and bringing a firearm to a federal facility.

An attorney for Ammon Bundy, one of the occupation’s leaders, contended that his client was seeking to hold the federal government accountable (E&ENews PM, Sept. 13).

Ryan Bundy, Ammon’s brother, who is representing himself, then took the lectern to deliver his opening statement.

Wearing a green plaid cowboy shirt and black leather vest, Bundy introduced his family, including his eight children, by displaying a family photo.

He then frequently cited the importance of "freedom of conscience," an apparent reference to freedom of religion, and quoted extensively from the Declaration of Independence.

Bundy spoke of rising up against despotism and said it was the "people’s duty" to do so.

Referring to the mandatory five-year prison sentences that were handed down to Oregon ranchers Steven and Dwight Hammond in 2012 for arson on public lands, Bundy said it was "the design of the federal government to reduce them to absolute despotism," so they came to help.

"This is all we want: Allow us to be left alone and earn a living for our families," he said. "We were not there to impede. We were there to promote liberty."

Bundy was followed by Shawna Cox, another key figure during the standoff who is also representing herself.

Her remarks, however, drew multiple objections from the government, who challenged whether Cox’s statements were relevant to the case or her defense. Federal District Court Judge Anna Brown agreed, sustaining the objections and directing Cox to stay on topic.

Cox went on to say she had participated in the Sagebrush Rebellion, started her local tea party and protested the 1996 establishment of the Grand Staircase-Escalante National Monument in Utah. She joined the 2014 standoff in Bunkerville, Nev., led by the Bundys’ father, Cliven. (All of the Bundys face separate charges and trials for that incident.)

Cox said she wrote a book about the Nevada standoff because "God told me to."

She argued that the "federal government is out of control, and there is no separation of power."

"Are my political views on trial here?" she asked. "Or have I committed a crime?"

In total, the government charged 26 of the occupiers with conspiracy. Many pleaded guilty, and some have delayed their trial, leaving seven in the current prosecution.

The remaining defendants after the Bundys and Cox played more minor roles in the standoff, and they offered a variety of reasons for being there.

Matthew Schindler, who spoke on behalf of defendant Kenneth Medenbach, said Medenbach’s actions amounted to an act of civil disobedience that was protected by the First Amendment.

He said Medenbach was motivated by the challenges facing rural Americans.

Medenbach changed the signs at the federal wildlife refuge, covering them with stickers that said "Harney County Resource Center."

Schindler said Medenbach doesn’t dispute any of the facts in the case but that he wasn’t intending to impede or threaten any federal officials and therefore was not part of any conspiracy.

Medenbach was simply trying to have his voice heard, Schindler said.

"There is no Ken Medenbach super PAC," Schindler said. "There is just him and his signs."

Lawyers for two defendants — Neil Wampler and Jeff Banta — argued that their clients didn’t know what they were getting into.

Robert Salisbury, Banta’s lawyer, said his client went to the refuge so Ammon Bundy could connect him with the Hammonds. Banta, the lawyer added, just wanted to help take care of the Hammonds’ ranch while they served their sentences.

And Lisa Maxfield, representing Wampler, said her client ended up at the refuge after attending the peaceful rally in Burns, Ore., for the Hammonds and jumping into a car. He didn’t intend to stay, she said, but ended up working as a cook.

And Per Olson, representing the youngest defendant, David Fry, similarly contended that Fry got in over his head.

He noted that Fry, the last holdout in the standoff, has been diagnosed with schizotypal disorder, a mental condition that leads to irrational thought processes.

Fry is prone to conspiracy theories and paranoia, he indicated, saying that he is "troubled by a lot of things in the world."

Olson said that Fry was "kind of a loner" at the refuge during the first part of the standoff and went unnoticed by federal officials.

But after Robert "LaVoy" Finicum was shot and killed during the arrests of the Bundys and others on Jan. 26, Fry became very defensive and concerned that the FBI would raid their camp. He hunkered down.