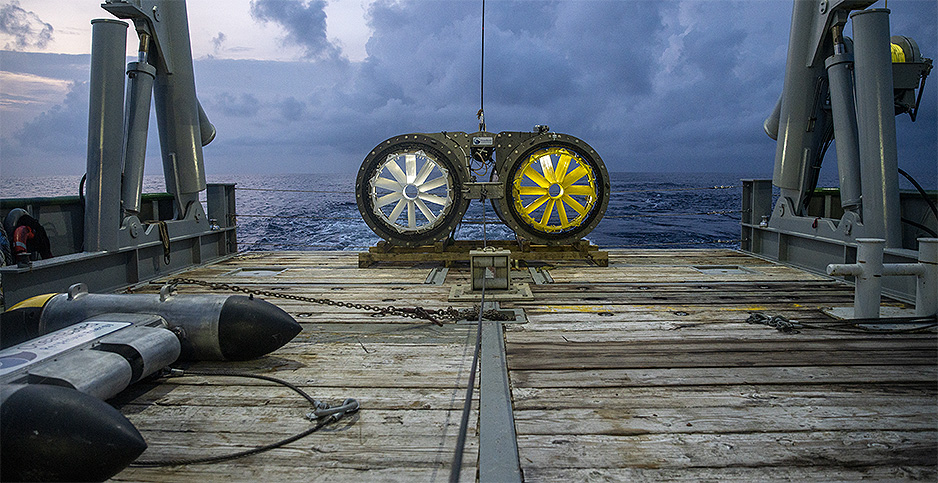 A technology that would use powerful ocean currents as a source of baseload electricity has reached an "important milestone," federal scientists said yesterday.

Late last month, the startup OceanBased Perpetual Energy LLC — with help from researchers at Florida Atlantic University (FAU) — showed for the first time that a continuous 24-hour supply of electricity could be produced by lowering turbines into the middle of the Gulf Stream, a giant, fast-moving current running from the Gulf of Mexico to the British Isles.

OceanBased, which ran the pilot over several days in May about 20 miles off the coast of South Florida, says it was able to generate about 80 to 90 kilowatts around the clock. That’s roughly one-fiftieth the power that many new onshore wind turbines can generate.

Nasser Alshemaimry, the chief executive of OceanBased, claims that the Gulf Stream’s energy will one day prove to be a "gift from God" to Florida by supplanting fossil fuels and even nuclear power plants with a continuous, renewable source.

"The holy grail of perpetual energy is right here along the Eastern Seaboard of the United States," he said.

The company is aiming to show that it can employ more powerful turbines to produce electricity at commercial scale, then secure federal and state permits and convince the utility Florida Power & Light to buy the electrons. Alshemaimry says the company will need $4 billion over the next decade for what would be the world’s first gigawatt of ocean current power. FPL did not respond to questions from E&E News.

Federal researchers said the project has promise, but also noted that the technology’s maturity is about where onshore wind power was in the 1980s or 1990s. Levi Kilcher, who leads ocean energy power research at the National Renewable Energy Laboratory, called the announcement a "a big step forward for the industry."

Vincent Neary, who leads marine renewable technology research at Sandia National Laboratories and called the project an "important milestone," said that the cost of ocean current electricity needs to come down dramatically to find a market.

In an email to E&E News, he noted a 2014 study he co-authored estimating that a 10-megawatt project — modest for the standards of a commercial power plant — would require a "ten fold reduction [in cost] to be competitive."

Part of a rotating gyre of currents created by strong winds off of western Africa, the Gulf Stream has in many ways defined South Florida, from its fishing to the strength of its hurricanes.

Globally, only a small handful of ocean currents are as powerful. No other U.S. state has a similar energy resource, except perhaps North Carolina, which is almost as close to the Gulf Stream.

In the Straits of Florida, the Gulf Stream could yield anywhere from 1 to 10 GW of extractable energy, according to peer-reviewed studies.

"Currents are highest here and these currents are closest to shore than anywhere else in the US," wrote Neary. "Therefore, this is the most notable and important site to demonstrate ocean CEC technologies."

The idea behind the pilot followed a simple concept: Anchor a ship in a section of the Gulf Stream where waters travel about 4 to 5 mph, dangle a turbine into it, and let the current turn a propeller inside the turbine.

To scale up, OceanBased is talking to General Electric and Siemens about buying turbines, and it has hired an outside consultant to serve as project manager and develop a business plan.

But as is often the case with early-stage technology, there are technological challenges.

Kilcher of NREL said ocean current energy is a lot like wind power, but "you’ve got to do it underwater." Unlike ships or oil and gas platforms, electrical gear would need to stay sealed off, submerged and functional for years without much attention from crews for the technology to be fully operational.

It also would need to be cost competitive with other forms of generation. OceanBased’s goal is to provide power at 3.2 cents per kilowatt-hour, less than half the price of the nation’s first large-scale offshore wind project in Massachusetts.

"You’re really going to have to take all your bells and whistles off, and get down to just what you need," said Kilcher.

Alshemaimry is thinking beyond bringing the power to shore in Florida; one day, that wave energy could power electrolyzers used to manufacture hydrogen for zero-emissions cars, he said. But the pilot is a "starting point for commercializing ocean current energy."

"We want to attract other hydrokinetic energy [companies] to come and join us. I welcome the competition," he said.