‘Off the charts’: Coal prices surge as West shuns Russia 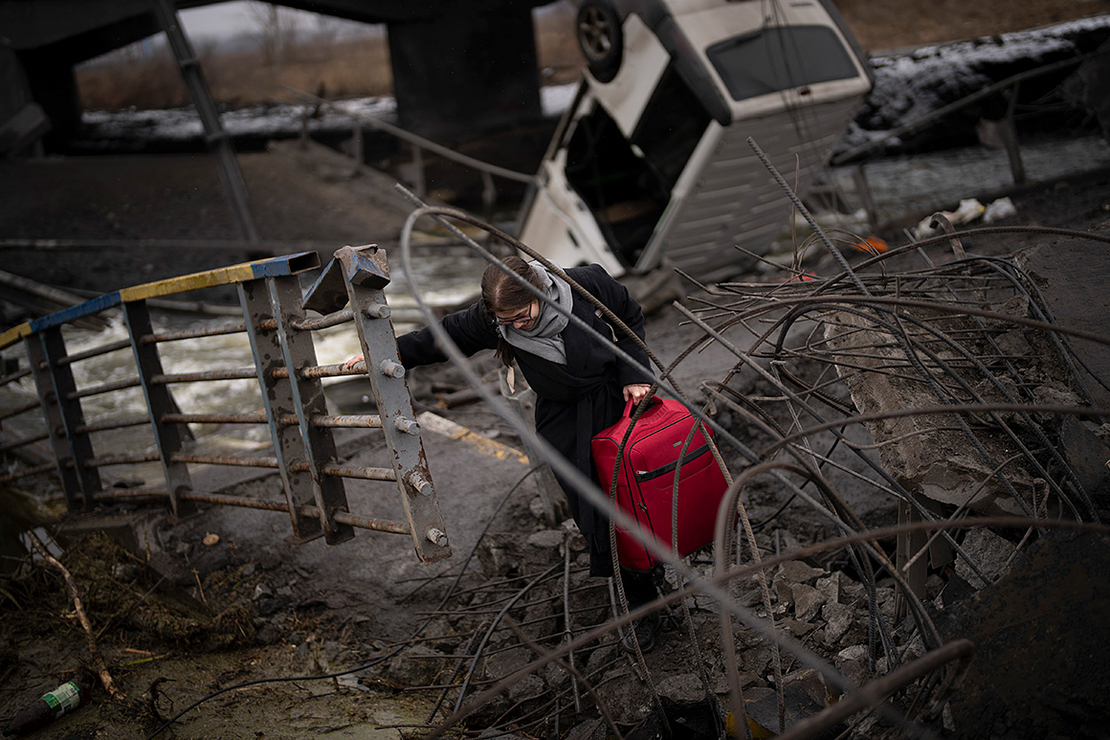 A woman carries her belongings across a destroyed bridge in the outskirts of Kyiv, Ukraine, yesterday. The invasion has all but halted Russian coal purchases, sending prices soaring. AP Photo/Emilio Morenatti

In Asia, the benchmark for coal climbed to a record $440 a ton yesterday, a rise of $127 from the previous day. European coal prices, meanwhile, increased from $315 per ton on Tuesday to $435 yesterday.

“These prices are absolutely off the charts,” said James Stevenson, an analyst who tracks the coal industry at Oil Price Information Service. “This means people are really desperate for prompt coal delivery.”

Russia is the world’s third-largest exporter of coal used for power generation. In 2020, roughly a third of its shipments went to Europe, according to BP PLC’s annual Statistical Review of World Energy. Germany is the largest European market for Russian coal. Italy is another major destination.

Coal is exempt from the sweeping sanctions Western governments imposed on Russia after the country attacked Ukraine last week. But much like oil markets, where traders have shunned Russian barrels in recent days, a growing number of Western utilities appear to be imposing a voluntarily embargo on Russian coal shipments, analysts said.

“Companies don’t want to be associated with Russia,” Stevenson said.

Europe has long bought coal from Russia, but that partnership has shown signs of strain in recent years. Coal power generation has fallen steadily in Europe over the last decade, as the continent cuts its carbon dioxide emissions.

The fuel did enjoy a modest rebound in Europe last year as a result of rising gas prices and an economic recovery after closures associated with the pandemic. Still, countries like Germany and the United Kingdom, historically two of Europe’s largest coal burners, have both committed to phasing out the fuel by the end of the decade.

Russia, on the other hand, is trying to boost its coal exports. In 2020, it announced plans to increase its domestic coal production 50 percent, from 217 million tons in 2019 to 380 million tons in 2035, according to the International Energy Agency.

Russia is developing new coal fields in the Arctic, where thawing sea ice has opened the door for new ports from which coal can be shipped out of the region. New port and rail expansions are also planned in the Far East. Much of that coal is destined for Asia and will be used in steelmaking rather than power production.

Russia’s leading coal-producing region is located in the central part of the country along the southern border with Kazakhstan and Mongolia.

Global coal markets were already facing a supply crunch prior to Russia’s invasion of Ukraine, but the war is likely to exacerbate the situation, said Matthew Preston, a coal analyst at Wood Mackenzie. Asia remains a growing market, and many countries in the region have been slower to embrace the sweeping economic sanctions imposed on Russia.

But the country’s export capacity is already near capacity, meaning it is unlikely to be able to increase shipments into countries like China and India, which could remain open to buying Russian coal, Preston said. China accounted for slightly less than 20 percent of Russian coal exports in 2020, according to BP.

Europe, meanwhile, is likely to turn to South Africa and Colombia to make up for lost Russian coal exports. Still, few countries have the ability to greatly expand coal production, Preston said.

“There is no one who can turn on the spigot, and the market is going to be short for as long as this goes on,” he said.