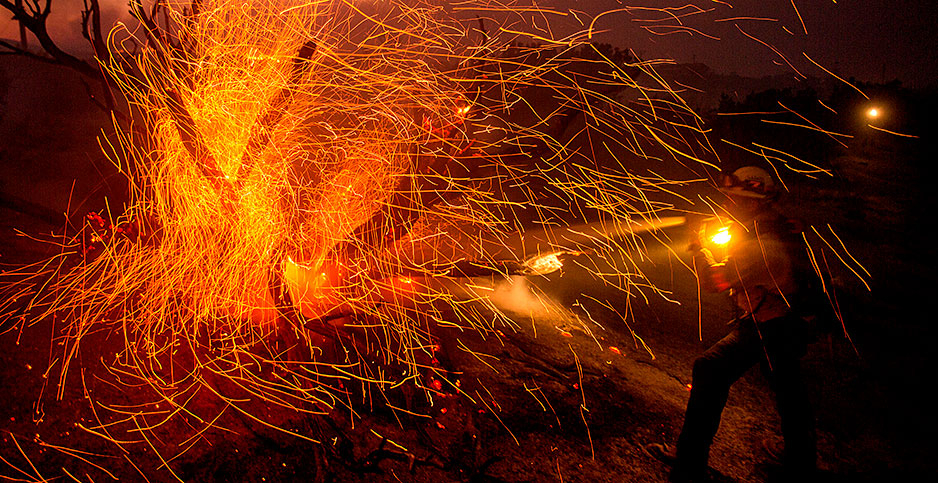 On Aug. 3, researchers at the Plumas National Forest in Northern California received a startling result: Sticks and logs they gathered from the forest floor to assess wildfire risk had a moisture level of just 2%.

The reading was the lowest ever recorded in 15 years of measurements at a site in the forest’s southwest corner. It also was a warning: The area was tinderbox-dry and primed to burn.

Two weeks later, when lightning struck the region, the dry forest helped propel one of the largest and deadliest wildfires in California history, killing 15 people as it consumed an area the size of Los Angeles.

Across the West, the massive wildfires that have burned millions of acres this year have been driven in large part by vegetation that has turned dangerously dry in a summer of record heat and minimal rain, an E&E News analysis shows.

Many unusual features have marked the 2020 wildfire season, including lightning sieges in California that ignited hundreds of wildfires and strong winds in Oregon that spread fire and smoke, forcing tens of thousands of evacuations.

Equally important has been the role of the region’s vegetation, which in many areas of the West has reached levels of unprecedented dryness, government data shows.

Fuel moisture is a key measure of wildfire risk that state and federal officials monitor along with conditions such as humidity, soil moisture and lightning intensity to generate the National Fire Danger Rating System.

Fuel moisture — the amount of water in vegetation — is calculated as a percentage of the dry weight of a piece of vegetation. Completely dry vegetation would have 0% fuel moisture. Any reading below 10% is considered highly flammable.

"It’s hard to exaggerate how important fuel moisture is. It’s absolutely critical," said Torben Grumstrup, a research engineer at the Forest Service’s Rocky Mountain Research Station in Montana. "Not only will fuel moisture have a profound effect on whether or not there’s an ignition, but also on whether that fire will spread into a larger area."

Researchers such as Clements regularly trek into the woods to take clippings from live trees and shrubs or to scoop up so-called dead fuel — the leaves, sticks and logs that litter forest floors. The samples are returned to a lab where moisture levels are measured and entered into a national database that has extensive readings back to the mid-1990s.

Just south of San Jose, in the foothills of the Sierra Azul Preserve, Clements measured the moisture of a shrub called chamise at 54% on Sept. 15. That was a record low for the shrub at the site in September. Shrubs, trees and other "live fuels" have much higher moisture levels than dead fuels and take longer to dry out because they can store more moisture.

In August and September, hundreds of measurements in the West set records for low levels of moisture, according to an E&E News analysis of data from 10 states. E&E News compared readings from August 2020 to all August readings taken in previous years and did the same for September.

"Having those record-breaking fuel moistures in terms of dryness is just setting the stage for explosive conditions," said University of Alberta fire scientist Mike Flannigan. "It’s like having gasoline just waiting for a spark. It’s primed, just itching to go, needing something to get it going."

Climate regions covering California, Nevada, Arizona, Colorado, New Mexico and Utah had record heat and record-low precipitation in the three-month period from July through September, according to NOAA data.

In the Western climate region, which includes California and Nevada, the total rain from July through September was just 0.25 inch compared with a normal rainfall of 1.22 inches. The average temperature in the region was 74.8 degrees Fahrenheit — more than 4 degrees above normal.

In the Southwest region, covering Arizona, Colorado, New Mexico and Utah, rainfall from July through September was 2.5 inches, and the average temperature was 72.9 F. Those numbers represented a record low and a record high, respectively, in 126 years of NOAA record-keeping.

Some researchers say climate change is fueling the growing size and intensity of U.S. wildfires by making vegetation increasingly dry.

A study of wildfire in the Pacific Northwest published in January in Fire Ecology concluded that "protracted warmer and drier conditions will drive lower fuel moisture and longer fire seasons in the future."

The readings themselves don’t necessarily reflect climate change because they cover a period of only 20 years or so. But some researchers say E&E News’ analysis points to ominous trends.

"A warmer world equates to drier fuels," said Flannigan, the Alberta fire scientist. "With drier fuels, it’s easier for fire to start and spread, and there’s more fuel available to burn. That means higher-intensity fires, which means they’re difficult to impossible to suppress."