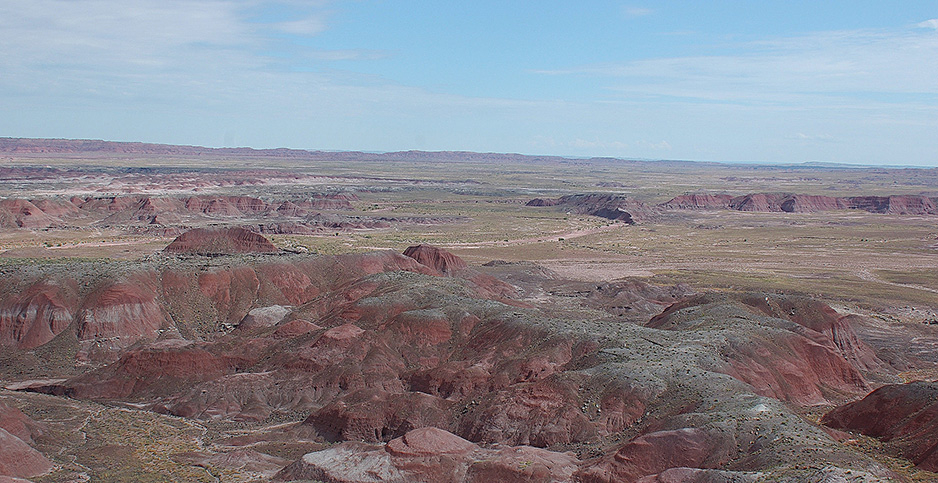 The U.S. Board on Geographic Names' Domestic Names Committee is considering changing the name of Chinde Point at the Petrified Forest National Park in Arizona. Chinde means "ghost" or "evil spirit possession" in the Dine Navajo language, and tribes want it to be renamed. bdinphoenix/Flickr

A proposal to rename an Arizona summit known for years as Coon Bluff shows how tricky geographic nomenclature can become.

At its monthly meeting this Thursday, the U.S. Board on Geographic Names’ Domestic Names Committee will see the renaming proposal for Coon Bluff — so named for a Boy Scout-related racoon trapping incident — as part of the quarterly review list. At least half a dozen other names on the latest list are likewise targeted as being offensive.

"There has in recent years been an increased awareness of names that might be considered offensive. As a result, there have been more proposals submitted to the BGN to change such names," Jennifer Runyon, a senior board researcher, told E&E News.

Interior secretary nominee Deb Haaland has suggested she could accelerate efforts to clean up the landscape, a never-ending task for the geographic names board, established in 1890 (Greenwire, Jan. 13).

"There are too many places and geographic features around the country that still have names that are racial slurs or derogatory terms, which make visitors feel uncomfortable and discourage them from enjoying the outdoors," Haaland told the Outdoor Industry Association in December (Greenwire, Jan. 20).

States, too, are reckoning with the past. Gov. Gavin Newsom (D) instructed the California Advisory Committee on Geographic Names to expand its membership and to proactively address the issue of offensive names in the Golden State.

At its February monthly meeting, the U.S. board’s Domestic Names Committee considered 22 naming proposals on the docket: 17 were approved, four were not approved and one was deferred.

Not surprisingly, the board approved changing the name of Squaw Tits, a 2,431-foot summit with two high points in Maricopa County, Ariz., to Isanaklesh Peaks. The summit is located in the Sonoran Desert National Monument.

"The proponent objects to the name Squaw Tits as ‘offensive to both Native Americans and women,’" the board summary noted. "The name Isanaklesh Peaks would refer to Isanaklesh, a powerful female Apache deity whose name means Mother Earth."

Native American concerns were also apparent when the board last month considered, but deferred action on, changing Arizona’s Chinde Point to Hózhó Point. The proposed new name for the 200-foot-high cliff in the Petrified Forest National Park means "beauty and harmony" in the Navajo language.

"The existing name of Chinde Point means ghost, poltergeist or evil spirit possession in the Dine Navajo language," the board explained, and "Native American staff and the Navajo, Hopi, and Zuni Tribal Preservation Offices are in agreement that [it] needs to be renamed."

But while some of the latest renaming proposals appear straightforward, others can raise hackles, reveal presumptions or articulate an evolving notion of what’s offensive.

"The most challenging cases are those where there isn’t consensus or where there are proposals that result in one or more counterproposals," Runyon said.

She added that "if there is no consensus among interested parties, the BGN must make a decision that might contradict the desires of one or more of those parties."

Some reconsiderations extend beyond race, gender or a bigoted past.

In Colorado, Summit County commissioners want the board to change the name of the Gore Range to the Nuchu Range. The mountain range honors Sir St. George Gore, whose lavish 19th-century hunting expeditions, during which he killed thousands of animals, were seen as "needlessly wasteful even at the time."

A board summary notes that coon is a "racially charged derogatory word."

The name of the bluff apparently has a more lighthearted origin.

The name dates to 1919, when a group of Boy Scouts camping near the summit trapped a raccoon and as a prank served it to their parents, claiming it was pork. The scouts reportedly began to refer to the area as "Coon Camp," "Coon’s Point" or "Coon Bluff."

Still, given the current reaction to the word, a name change has been proposed. An initial idea suggested renaming it Mustang Bluff, after a population of wild mustangs that inhabit the Salt River area near the summit.

That posed other problems.

"The existence of these several hundred unauthorized horses is politically polarizing within the conservation and recreation communities," a board summary stated.

The latest idea is to call the feature Raccoon Bluff.

From Haaland’s home state of New Mexico, for instance, a still-pending proposal would change the 40-mile-long Rincon Valley to Hatch Valley. The proposed name refers to the valley’s village of Hatch, which bills itself as the epicenter of Hatch chile farming.

The proponent is a board member of the Hatch Chile Association, a group of local farmers who are attempting to certify the Hatch name and limit its use to products grown in the area they call the Hatch Valley.

For these farmers, names matter a lot.

"The Hatch Valley may be to chiles what the Napa Valley is to grapes," then-U.S. 10th Circuit Court of Appeals Judge Neil Gorsuch observed in a 2016 opinion in a trademark case.

Gorsuch, now a Supreme Court justice, added, "Just ask any of the 30,000 people who descend on the place every year for the chile festival."