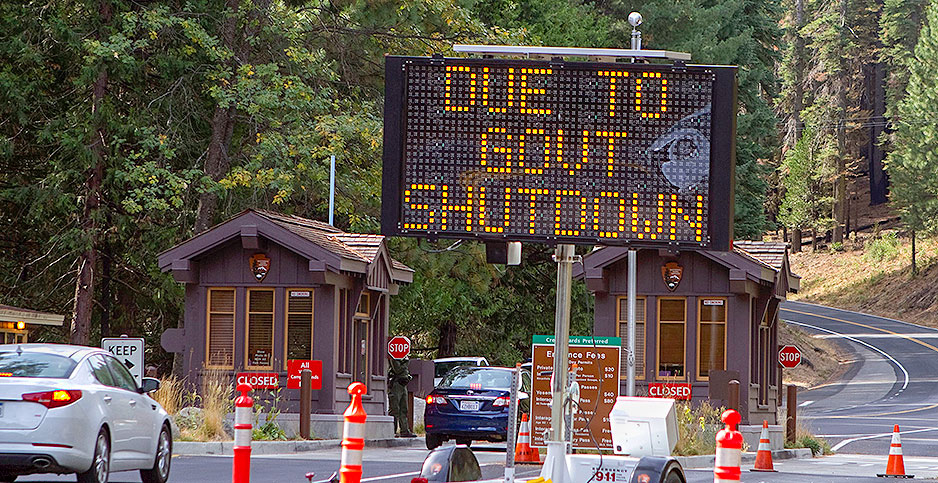 A temporary sign alerting travelers that Yosemite National Park is closed due to a government shutdown stands at the northern entrance to the California park in October 2013. Tracy Barbutes/ZUMAPRESS/Newscom

A potential federal shutdown this week threatens to renew a long-running saga of what happens to popular national parks and other sites when government funding is cut off.

"We are not going to speculate on any possible change in government operations. National parks are open and continue to welcome visitors," said National Park Service chief spokesman Jeremy Barnum.

The threat looms as Congress struggles to cinch a final fiscal 2019 spending deal that would provide funds for Interior and an array of other agencies. If no new funding is in place by midnight Saturday, a partial shutdown will ensue.

Behind the scenes, NPS and other Interior agencies have plans on the shelf from previous lapses in appropriations, which have become increasingly common.

Lawmakers are not eager to say if parks would close, and it’s not clear how the pending resignation of Interior Secretary Ryan Zinke could affect planning.

It would seem more likely than not that national parks and other sites would find a way to remain open.

During a three-day shutdown in January, many parks were kept operating under Zinke’s orders (E&E Daily, Jan. 25). And in other cases, states took steps to keep the sites accessible.

"We need to find a way through this. We’re focused on avoiding it completely. We can’t just let it happen," said Sen. Steve Daines (R-Mont.), who chairs the Energy and Natural Resources Subcommittee on National Parks.

He said there are significant winter activities in his state’s two world-famous national parks, Yellowstone and Glacier.

Other outspoken park supporters said they were holding out hopes for a deal to entirely avoid the shutdown.

Sen. Angus King (I-Maine), a member of the Energy and Natural Resources Committee, said the likelihood of a shutdown at Acadia National Park and public lands elsewhere was "totally unnecessary and shouldn’t happen."

He was unaware of any conversations with the administration on how it would handle national park closures if the stalemate forces a partial shutdown.

Picking up the tab

In the 2013 shutdown, which spanned 16 days, Utah spent more than $1 million to reopen parks. The state is home to what it markets as the "Mighty Five" — Arches, Canyonlands, Capitol Reef, Bryce Canyon and Zion national parks.

Similarly, local media reports noted that New York state spent $65,000 per day to keep the lights on at the Statue of Liberty during a three-day shutdown of the federal government earlier this year.

But ahead of the next potential government closure, it remains to be seen whether any states would pay to operate visitor centers, entrance gates or other basic services at national park units.

Edwards said officials are working with NPS to "minimize" disruptions in the Beehive State. As with the shutdown earlier this year, Herbert said he expects the state’s park would be open, albeit without regular staffing.

Edwards added that individual park information will be available to the public next week "should a shutdown become imminent."

But many states — including California, Washington and Wyoming — simply plan no action if federal public lands go dark in the near future.

"In our state, the governor can’t just materialize $1 million out of the air to do something like that," noted Jon Snyder, who serves as Washington Gov. Jay Inslee’s (D) senior policy adviser on outdoor recreation and economic development.

Snyder explained that a special session of the state Legislature would be needed to approve any funds, which would be unavailable until April at the earliest.

"I don’t mean to minimize the shutdown, but if the shutdown were happening in the summer months, we’d be having a more robust discussion," he said.

Although many ski resorts that are located on public lands in states like Colorado and Utah are entering their high season, National Ski Areas Association Public Policy Director Geraldine Link said a government shutdown will not affect their operations.

"We already have approved operating plans on Forest Service lands, and we manage the acres and operations under permit from the Forest Service," Link said.

According to a January memo from the Forest Service, permit holders of "special use authorizations" for operations like ski areas, outfitting and guiding, and concession campgrounds may continue during a shutdown.

New permits and construction projects that require Forest Service monitors would be suspended, however.

Politics is often a factor in shutdowns involving the country’s national parks.

In the 17-day shutdown of 2013, Republicans angrily blamed the Obama administration for barricading national parks and monuments, casting the move as a way to gin up public opinion against the shutdown.

"They were told by the Obama administration to make it hurt," Sen. John Barrasso (R-Wyo.) said last week of the park service. "And that’s why you saw the barriers up around the World War II Memorial."

Barrasso said, "I thought that was completely disrespectful of our veterans, but that’s the way President Obama wanted it — he wanted it to hurt."

Democrats at the time rejected such criticism as hypocritical, given that it was House Republicans who forced the shutdown in the first place in a futile protest over health care.

Like other lawmakers, he eventually adopted the position that national parks should be immune from shutdowns.

According to NPS contingency plans online, if parks were to close, the agency must notify visitors that it will "cease providing visitor services, including restrooms, trash collection, facilities and roads maintenance (including plowing), campground reservation and check-in/check-out services, backcountry and other permits, and public information."

National and regional offices and support centers will be closed and secured, except where they are needed to support excepted personnel. Non-excepted employees will generally have four hours to complete their shutdown activities before entering furlough status.

Essential activities that will continue include law enforcement, those "essential to ensure continued public health and safety, including … sewage treatment operations," and "activities that ensure production of power," according to the contingency plan.

Former Shenandoah National Park Superintendent Jim Northup warned that merely the threat of a government shutdown can be detrimental to park operations.

"The staff is not 100 percent focused on their normal job. They’re having to anticipate this unfortunate event," said Northup, who noted that he went through multiple shutdowns during his 36-year career with the park service and said the closures often require "weeks of preparation."

"In every single park around the country, the park staff, rather than focusing on their normal, important duties, are thinking through: ‘OK, how do we handle this shutdown?’" he added. "A government shutdown is just an enormous disservice."

While each administration determines exactly how national park units will operate during a funding lapse — some parks may remain open to visitors without staff, while others may be shuttered — Northup asserted that either option can be dangerous to both the public lands and visitors themselves.

"When those visitor centers are not open, when those rangers are not on duty, many people are coming into the parks without the background information they need," Northup said.

"It’s really a shame that once again, the National Park Service is being used as a political tool in the middle of this budget negotiation between the Congress and the president," Francis said. "It affects our employees’ morale. Our employees give a lot each year to the American public; they risk their lives to make sure the American public is safe."