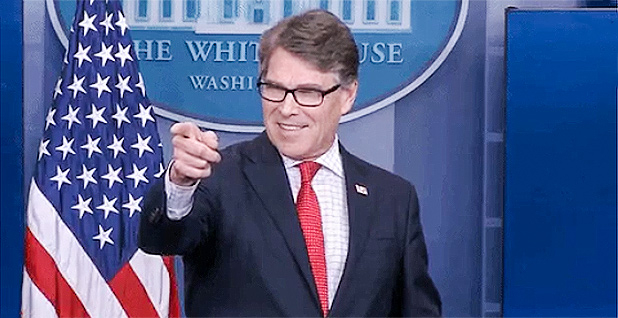 Energy Secretary Rick Perry was emblematic yesterday of an administration that questions the science behind climate change while at the same time it praises America’s ability to reduce carbon dioxide emissions.

Perry has talked about the importance of advancing technologies to capture coal plant carbon emissions during appearances this week at the White House. He also plugged the benefits of zero-emission nuclear power.

Those highlights are interspersed with claims of doubt about scientific findings related to the effect that those emissions have on the climate. Perry last week said carbon dioxide is not a primary driver of rising temperatures, and yesterday claimed that the science is unsettled with regard to how much people are affecting temperatures.

"Either they do think CO2 emissions are a problem, which is why nukes and [carbon capture and sequestration] would make sense, at least to them, or they don’t," said David Bookbinder, chief counsel for the libertarian Niskanen Center.

Perry’s comments come as the administration is promoting American "energy dominance" and opportunities for exporting fossil fuels. The campaign conflicts with efforts to address climate change, like the Paris Agreement and its goal to limit warming to 2 degrees Celsius.

Perry yesterday told reporters at the White House that "there was one fact missing from the headlines about the U.S. withdrawal from the Paris Agreement, and that is that the United States already leads the world in lowering emissions."

"And we’ve done this through innovation and technology, not by signing agreements," he said.

Perry pointed to advances in natural gas fracking, which sped a shift away from U.S. coal use. He also said new discoveries in carbon capture for coal-fired power plants might surprise the world soon.

"The climate is changing. Man is having an impact on it," Perry said, lamenting that "we can’t have an intellectual conversation about just what are the actual impacts."

Perry said how much humans affect climate change is "what’s at debate here."

Even as administration officials raise questions about the level of people’s impact on the climate, they’re also promoting technologies that could limit warming. Perry has made those climate benefits part of his argument for bolstering "clean coal" and nuclear power.

Yesterday, he urged the public "to be open-minded about innovation" that could buttress coal use. One carbon capture project is running successfully in Texas; another in Mississippi has been plagued with technical and financial difficulties.

"My point is that with coal, there may be some uses of coal that we never even dreamed of before that can really make a big difference," Perry said.

He was also emphatic in his support for nuclear power, pointing to France as a nation that relies on the energy source for a majority of its power. He pitched nuclear, and coal, as an important element of national security and grid stability, by exporting those resources and technologies.

Those arguments might be the foundation for an upcoming study from Perry’s agency about whether tax incentives for renewable power are making coal and nuclear plants less economical to run, while threatening the stability of the electric grid. The study is expected to be released next month.

Perry, speaking at an energy conference yesterday, suggested that renewable energy is favored by political opponents to the Trump administration.

"These politically driven policies, driven primarily by a hostility to coal, threatened the reliability and the stability of the greatest electrical grid in the world," Perry said at the U.S. Energy Information Administration’s annual conference.

"I recognize markets have had a role in the evolution of our energy mix, but no reasonable person can deny the thumb, or even the whole hand, if you will, has been put on the scale in favor of certain political outcomes," he added.

Renewable energy advocates criticized the upcoming study for presupposing its conclusions, and they have produced their own research to counter the upcoming report (Energywire, June 27).

Commissioner Colette Honorable, who announced earlier this week that her last day at the Federal Energy Regulatory Commission would be Friday, also suggested that changes to the U.S. energy mix are due to market forces.

"I’ll suggest to you it’s been less about regulation and more about economics," she said.

In particular, low natural gas prices and declining hardware costs for wind and solar power are the bigger factors pushing coal and nuclear power plants out of the mix.

"The most incredible story in the U.S. has been the evolution and the prolific production of renewable resources in the U.S.," Honorable said.

"Do I believe that [renewable energy deployment] has impacted grid reliability? Absolutely not," she said. "I don’t see any problems with reliability, and I say bring on more renewables."

It’s unclear what the administration could do to help the coal and nuclear power industries, although Trump could announce new initiatives tomorrow when he’s scheduled to speak at Energy Department headquarters.

Renewable power interests are expected to be absent from tomorrrow’s formal proceedings, although some have met with White House officials previously.

While observers do not expect Republicans to embark on an effort to rescind tax breaks for renewable power, like the production tax credit for wind, Perry said earlier this week that everything should be on the table when discussing tax reform.

Yesterday he said that renewables are "proving themselves to be a valuable part of a diverse portfolio." Those comments followed Trump’s criticism of wind energy last week during a rally in Iowa, where about one-third of the state’s electricity is derived from wind turbines.