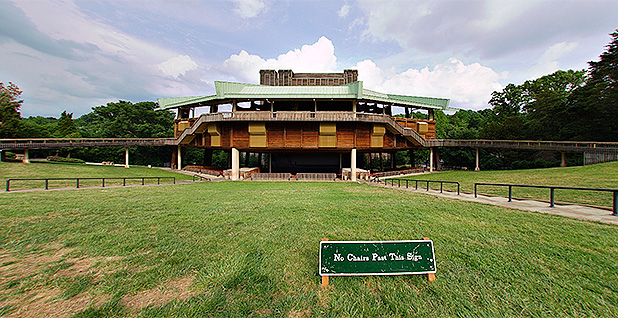 Ignoring the concerns of the Interior Department’s inspector general, top agency officials are going to keep their access to free concert tickets under a new contract with the Wolf Trap National Park for the Performing Arts in Vienna, Va.

For more than four decades, bosses at the Interior Department have enjoyed a special perk: free tickets to all performances at Wolf Trap.

But the practice caught the eye of the agency’s Office of Inspector General last September, when a report said the free tickets raised "ethical concerns" and should be reviewed. At the time, then-Interior Secretary Ryan Zinke had received tickets for eight box seats for each performance, valued at more than $43,000 a year.

Despite the IG’s concerns, the Interior Department will continue receiving the free tickets, under terms of a new 20-year contract signed this week, obtained by E&E News. It replaces a shorter-term contract that expired Tuesday.

Wolf Trap is a 117-acre park that hosts more than 100 outdoor performances each summer and has year-round hiking trails and picnic areas. This year’s performances include musical stars like Diana Ross and the Avett Brothers, other types of performances like the American Ballet Theatre, and a collaboration between rapper Nas and the National Symphony Orchestra.

The National Park Service decided the tickets are an ethical allowance for Interior officials.

"After an ethics and legal review, the NPS confirmed that the tickets are government property and may be used by the department for authorized purposes," said Jenny Anzelmo-Sarles, chief of public affairs for the NPS National Capital Region. "Consistent with this determination, under the new agreement the foundation will provide the Department of the Interior with eight seats for each performance."

But the IG’s office said this morning that its concerns remain unresolved.

The agency watchdogs had determined that "the prior use of the tickets did not comply with ethics regulations," and Interior’s own ethics review agreed, said Nancy DiPaolo, director of external affairs for the IG’s office. "That opinion recommended that the department establish written procedures for the disbursement and use of the tickets."

But the agency didn’t do that.

"Our concerns will be resolved when NPS develops a transparent, accountable policy and practice for the handling of the tickets," DiPaolo said.

P. Daniel Smith, NPS’s acting director, told the IG last year that the agency had asked Interior’s Office of the Solicitor to conduct an ethics review and give a legal opinion on whether the free tickets provided by the foundation were appropriate.

The foundation is a nonprofit organization that operates Wolf Trap under an agreement with the Park Service. Anzelmo-Sarles said the new long-term contract with the foundation "complies with contemporary laws and policies while ensuring that our partnership will continue to provide visitors with exceptional, one-of-a-kind experiences."

"The partnership between the National Park Service and Wolf Trap Foundation for the Performing Arts has made possible diverse performing arts programs and performances that people have enjoyed for generations," she said.

That includes Interior secretaries, who have been taking the freebies since the late 1970s. In 1979, the IG first criticized the arrangement, saying the department "would be better served by strictly prohibiting free tickets."

Zinke tweeted about one of his visits to Wolf Trap in July 2017.

"Best trails for kids … my granddaughters love the trails at Wolf Trap. Great for performance art and hiking!" Zinke wrote.

In its report last year, the IG said the eight free tickets were valued at $543 combined for each event. The $43,000 total value was based on an estimate of 80 events per year.