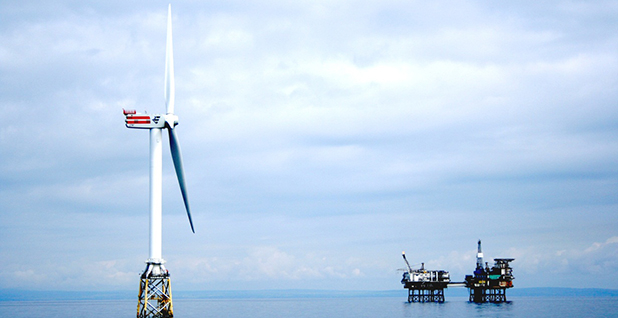 The REpower 5M turbine off Scotland's coast is one of the world's tallest. Bureau of Ocean Energy Management

The Atlantic Wind Connection was a visionary project when it was born eight years ago.

The fairest and most efficient way to deliver electricity from future wind power clusters off the Atlantic coast would be to build a 250-mile-long network of buried high-voltage transmission lines connected at a few strategic points to the onshore power grid from New York to Virginia, the developers said. The transmission service would be open to all competing wind power developers.

It would be a defining example of strategic transmission investment: Instead of adding new lines as a last resort to ease overloaded networks, new projects would be built in advance to meet priority energy and climate goals, from adding clean energy generation to creating more grid capacity as insurance against worst-case disasters.

Ken Salazar, Interior secretary in the Obama administration, endorsed the goal when the project was proposed. "Rather than develop transmission infrastructure plans on a piecemeal basis, we should — in close coordination with the private sector, states and tribes — lay out a smart transmission system, up front," he said (Climatewire, Feb. 23, 2011).

But it was too visionary.

Now the door may be opening to smaller versions of the big project, thanks to commitments from political leaders in Massachusetts, Rhode Island, New York, New Jersey and Maryland to add 8,000 megawatts of offshore wind by 2030.

A critical, open question is whether the states will see a greater value in a multistate offshore transmission backbone like the Atlantic project, permitting a large-scale but more targeted sharing of offshore energy, or approve separate lines coming in from the wind farms off their separate coastlines, said Kevin Knobloch, president of New York OceanGrid LLC.

His venture, a subsidiary of Anbaric Development Partners LLC in Wakefield, Mass., has applied to the Interior Department’s Bureau of Ocean Energy Management (BOEM) for a permit to build a 213-mile submarine transmission network to bring 2,400 MW of offshore wind into New York and 3,500 MW into New Jersey by 2030. Anbaric, an independent transmission developer backed by Canada’s Ontario Teachers’ Pension Plan, has built two underwater transmission lines from New Jersey to Manhattan and Long Island.

OceanGrid will seek BOEM right-of-use permits to run connections from federally managed waters to a series of selected substations on land. There’s also a step at the Federal Energy Regulatory Commission, seeking permission to negotiate with customers to plug into the offshore network, Knobloch added.

Because the states have the lead ability to issue procurements for wind project development, each part of the OceanGrid network will begin as a separate connection to match each state’s regulatory requirements, Knobloch said. "We will design them as they are built, state by state, so down the road they could be connected" into a single backbone.

"We’re working to convince policymakers at every level, BOEM, RTOs [the regional transmission organizations that receive the wind power] and state commissions that this is a wise way to go," he said.

"The Atlantic Wind Connection project has changed over time, adapting as the industry has changed," he said. "We will likely pursue smaller, more incremental offshore transmission projects before the backbone is built."

"In a sense it was a project before its time," Knobloch said. "The financing and, maybe more importantly, the federal and state policies then were not yet aligned and mature as much as they are now."

But high-voltage transmission lines remain the least-loved component of the electricity networks, and there’s no policy mandate for their future, according to a number of experts speaking at several forums in the past two months.

FERC’s landmark Order 1000 in 2011 was designed to increase competition and innovation in transmission projects, encourage interregional grid planning, and support state renewable energy policies. But it has fallen short of its most ambitious goals, speakers at one conference said (Energywire, Nov. 16).

For many in the energy debate, microgrids, energy efficiency strategies, battery storage and electric vehicle development appear more appealing options for the grid’s future than transmission.

Patricia Hoffman, principal deputy assistant secretary of the Department of Energy’s Office of Electricity, told a conference in October that the indications that transmission investment is headed downward are "a little disheartening."

"We must have the additional flexibility and capacity we need … to respond to anything that may occur on the system," she said.

Bold transmission plans continue to emerge. The National Renewable Energy Laboratory has developed an "Interconnections Seam Study" that investigates construction of thousand-mile-long high-voltage direct-current lines connecting the three separate grid segments in the continental U.S., so that renewable power could be directed across multiple time zones to maximize its use (Energywire, July 27).

Because the direct-current lines would not be tightly tied into the existing high-voltage networks, their power could also be directed to help recovery from a widespread outage, NREL officials say.

But a grid strategy based on advancing carbon-free electricity doesn’t have hope of support in the Trump administration, as its officials have made clear.

State support for wind power is strong from New England to Maryland, but not for a large backbone power distribution network, Knobloch said.

At this point, there is more interest at the state level in inviting wind developers to build their own lines into shore. "The policymakers want to do that without costly upgrades of key substations" that receive the offshore energy, he said.

"We think that sets up a situation where they will go to the closest and most desirable substation interconnection points, and potentially underutilize them, and make it harder for subsequent wind farms to follow," Knobloch said.

BOEM’s mission includes stimulating competition in offshore development through the leases it authorizes. It hasn’t taken the step of requiring transmission to be open access, he said.

"We feel very strongly that we’re on the dawn of a brand-new industry," he said. "However, we think if we don’t carefully plan our approach — how we are going to get electricity to shore in the most cost-effective way with the most minimal impacts on marine life, commercial fisheries and neighbors where the cables will go to onshore — we simply won’t succeed in delivering these targets.

"We feel that we have been heard. But there’s a tension between the sense of urgency to get the first wind farms into the ocean, versus thinking through the transmission and inviting proposals to build the backbone," Knobloch said.