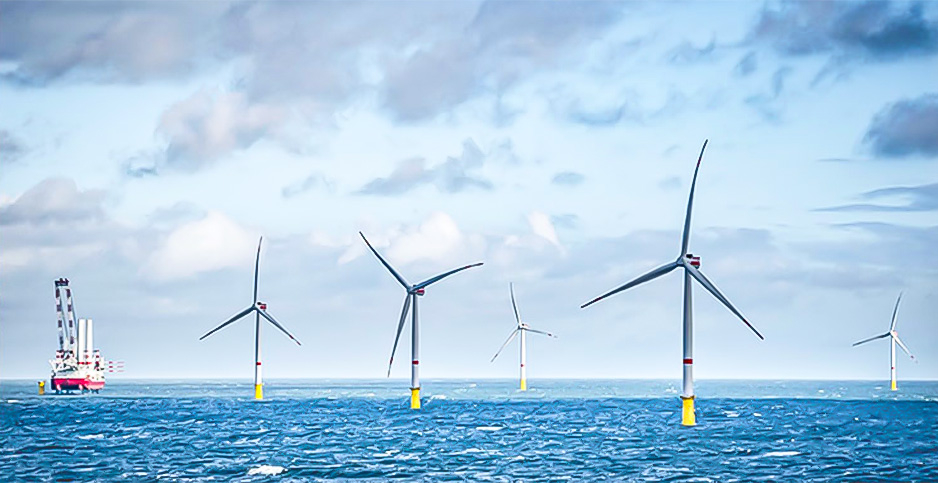 An illustration of the proposed Vineyard Wind offshore project off the coast of Martha's Vineyard, Mass. Vineyard Wind

The wind industry put on a brave face yesterday as the Trump administration disclosed it wouldn’t complete permitting for the nation’s first offshore wind farm until after the 2020 election — a delay of a year and a half from earlier targets.

The American Wind Energy Association praised the administration for offering "clarity" to the industry. So did Vineyard Wind LLC, the developer behind the 84-turbine proposal off the coast of Martha’s Vineyard, Mass., even though it will now miss its most optimistic operation target of 2022.

"Any delay is a challenge," said Laura Morton, senior director of policy and regulatory affairs for offshore at AWEA. But she said having a schedule in place — albeit one that the industry hopes will accelerate before the end of the year — is important.

Still, some were skeptical about the extended delay given the Trump administration’s mixed messaging on the wind sector.

The Bureau of Ocean Energy Management acknowledged Monday in the president’s budget proposal a need for more funding to meet the demands on its renewable energy shop as proposed offshore wind projects continue to stack up.

The Business Network for Offshore Wind later called the move an encouraging sign that the White House values the offshore wind sector.

But President Trump in a speech Monday in New Hampshire repeated his belief that "windmills" kill too many birds.

"There is almost never a unified voice coming from the administration," said Anthony Logan, senior wind analyst at Wood Mackenzie.

The "true intentions" of the administration, he added, remain murky.

The Trump administration appeared gung-ho on offshore wind when Secretary Ryan Zinke helmed the Interior Department, but his replacement, David Bernhardt, has been far more restrained.

Vineyard Wind’s Massachusetts project was expected to be the first to secure federal permitting last July. But BOEM stalled the final environmental review, saying a study of the cumulative impacts on fisheries from a potentially extensive wind industry was needed before Vineyard could move forward (Greenwire, July 18, 2019).

BOEM acting chief Walter Cruickshank later shushed fears of political opposition to wind, saying the administration had continued to be supportive of an all-of-the-above energy approach.

Cruickshank told the offshore wind industry at a conference in October that a draft of the cumulative analysis should be done by early 2020 and that it would smooth the way for future projects (Climatewire, Oct. 23, 2019).

Concerns about the study linger.

It was late in the game for the agency to realize that the many offshore projects in the pipeline would have a cumulative impact, said Logan of Wood Mackenzie.

"The idea that they have to go back and do this raises some serious questions of intent and competence," he said.

And given the level of expertise and experience at BOEM, the issue doesn’t seem to be one of competence, he added.

Tracey Moriarty, a spokeswoman for BOEM, said the new timeline for Vineyard represents the agency’s desire to take a "robust" look at the impacts from wind energy and incorporate new information, such as additional state offshore wind targets.

Interior spokeswoman Carol Danko did not directly answer a question about pushing the Vineyard decision until after the presidential election. She noted that an expanded cumulative analysis is a direct response to stakeholder input. It would incorporate changes that Vineyard has made to its construction plans, such as an intention to build larger turbines than were first proposed.

Aside from political questions, developers have lined up to fill a new market created by state commitments to buy offshore wind. And BOEM’s new schedule inspired scolding from those concerned about the pipeline of projects affected by delays.

"Regulatory delays — especially of a new industry — could open the door to unexpected and unintended bottlenecks and holdups," Milito said.

But Milito also nodded to the "complexity" of BOEM’s undertaking and the need for an environmental review that could stand up to litigation "filed in an attempt to block the ascendant offshore wind industry."

Logan of Wood Mackenzie said projections for the Vineyard project remain positive despite the delay.

"It’s more challenging, but they have a very talented team over there," he said.

The company should be able to hold on to industrial tax credits and will benefit from the continually falling costs of development.

Vineyard had initially signaled that the permitting delay could threaten its project but has since walked back on that concern. It continues to seek offshore wind opportunities in the Northeast and recently won an offshore wind contract with Connecticut.

Grybowski said he has yet to see anything from the Trump administration that would make him think the market was at risk, a point of view he called somewhat "contrarian."

BOEM appears to be trying to proceed with caution, he said.

"It’s better to make some early compromises that might cost you time or money," Grybowski said, "if it increases your chances of success in the long run."