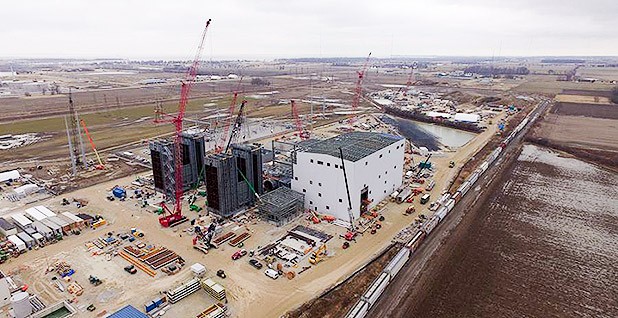 King, managing partner of Apex Power Group LLC, is particularly fixed on 118 acres across the I-77 from a highway rest stop. The empty field happens to be adjacent to the Rockies Express natural gas pipeline transporting Appalachian shale gas to points east and a high-voltage line moving electricity across the Mid-Atlantic.

He figures the spot is perfect for a new $1.45 billion power plant that will run on gas from the Marcellus and Utica shale formations that underlie the area.

The 1,650-megawatt Guernsey Power Station is the largest of almost a dozen of this new breed of power plants being developed across Ohio these days, a number that includes the recently completed Oregon Clean Energy Center, an 870-MW plant outside of Toledo.

Together, the plants represent about $10 billion of investment in new generating capacity that will power millions of Ohio homes and, not coincidentally, ratchet up the pressure on aging coal and nuclear plants in the region.

The wave of development is occurring against the backdrop of relentless lobbying by utilities seeking millions of dollars in subsidies to prop up those same plants, which are struggling to compete in a new world of cheap shale gas and eroding electricity demand (Energywire, Nov. 7, 2016).

But King isn’t short on confidence that projects like his will win out over older, less efficient coal plants as long as power markets are left to function without political interference.

"Where can the small companies compete with the big utilities and bring improvements to the system? You’re witnessing it in Ohio," he said. "It’s time to accept the fact that you’ve got a new technology and you should be taking advantage of it to the benefit of everybody.

"We definitely view our plant and our design as the new baseload in PJM," King said.

As much as any state, the upheaval in Ohio’s electric generation fleet illustrates the trend.

Twenty years ago, coal fueled more than 80 percent of Ohio’s generating capacity, according to data from the U.S. Energy Information Administration. The most recent EIA data for May show coal’s share was 57 percent and certain to lose ground to natural gas in subsequent reports.

As coal’s market share wanes, utilities that built and operated the previous generation of power plants in Ohio, back when state regulators set electric rates that let the companies recoup their costs and earn a profit, are bowing out of today’s competitive wholesale power market.

Columbus-based American Electric Power Co. Inc. and Akron’s FirstEnergy Corp. have written down by billions of dollars the value of decades-old coal and nuclear plants, staking their futures on being rate-regulated electric distribution and transmission utilities.

The strategic decisions to exit merchant generation only followed a ruling by federal regulators to block billions of dollars in Ohio ratepayer subsidies to keep the plants running profitably (Energywire, Feb. 23).

Even still, the utilities are continuing to press for ratepayer aid, including FirstEnergy’s lobbying to prop up its two nuclear plants in the state.

While a bill to rescue the reactors stalled this spring, FirstEnergy executives said they’ll continue to seek its passage, saying energy and capacity prices won’t support the plants’ continued operation.

"Without some type of market reform or support, it’s very difficult to see these nuclear facilities operate much beyond the next refueling outage," James Pearson, FirstEnergy’s chief financial officer, told analysts and investors during a presentation last week.

Gov. John Kasich (R), however, opposes the bill. Fittingly, perhaps, the governor said so at a ceremony marking the opening of one of Ohio’s new natural gas plants.

"I just think they’re going to have to work their way through this themselves," the governor told reporters.

Needless to say, existing power plant owners and developers like Apex Power, which are counting on older plants continuing to shut down, are going head to head in an already oversupplied market.

How successful utilities are at pushing policy changes in Ohio and rule changes at grid operator PJM Interconnection, which administers the region’s annual capacity auction, will shape how much new generation ultimately gets built, said Paul Patterson, an analyst at Glenrock Associates LLC.

"If you’re allowing all of these other generators that theoretically should close to remain open, then you’re putting a squeeze on new entry," he said.

It’s a point that’s front of mind for energy developers like King. "They could literally slow down or stop development of new plants for a while because of the signals that are being sent," he said of the proposed subsidies.

Among all the new gas-fired plants to be proposed in Ohio, King believes the Guernsey project is "one of the most competitive" on the list.

"We have a lot of advantages in our economy of scale and size, our location and our gas purchasing capability" and transmission access, he said.

A list of 11 natural-gas-fired power projects in Ohio that are either in development or recently began commercial operation. Together, they represent more than 10,000 megawatts of new generation being built to take advantage of gas from the nearby Utica and Marcellus shale formations. The projects also figure to increase pressure on aging coal and nuclear plants in the region, a trend at the center of the Energy Department’s recent grid study.

King, who spent most of his 35 years in the electric power industry working for utilities including Cinergy and successor Duke Energy Corp., has long known that much of the Midwestern coal fleet was 40 to 60 years old and would eventually be shuttered.

Having begun his career testing the thermal efficiency of power plants, he also knew that modern combined-cycle gas plants have improved dramatically in efficiency.

Still, it was more fully understanding the scale of shale gas development in the region and investments being made to get gas to new markets that prompted the company to pursue the Ohio plant.

"The ‘Aha!’ moment for me was a presentation by one of the gas pipeline companies that started telling me how much production had increased, and they were building pipelines and expansion projects and how the Rockies Express was changing directions to east-to-west," he said.

"When we looked at the Guernsey site, within 10 miles of Guernsey Power Station, there’s enough gas in pipelines today to power 35 of those units," King said. "That makes a bold statement."

There are a few natural gas generating projects pending approval at the Ohio Power Siting Board. Several have already been approved by the board. Still other developers have filed a pre-application or publicly indicated plans for projects.

The Guernsey plant has yet to be formally approved, but the board staff has recommended approval under a stipulation and agreement filed last month. Developers have proposed to begin construction by the end of the year, with commercial startup in the fall of 2020.

Like elsewhere across the Rust Belt, manufacturing was king in the county for decades. But little by little, companies like Dayton-based NCR Corp., which employed 3,000 in the area, shut down and left the area looking for a new identity.

Around 2010, it found one: oil and gas from the Marcellus and Utica shale.

"I’ve never seen an industry take off like that one did," Gombeda said, describing how the shale boom spurred housing sales and tax receipts, brought new restaurants and hotels to the county and cut the local unemployment rate in half.

"But almost as quickly as it came, it went away," he said.

It was almost a year ago, just as oil and gas drilling began to pick up again, that King reached out to discuss plans for the power plant, which drew strong support at a public hearing last month.

Unlike with the boom-and-bust oil and gas business, if the power plant project gets financed and built, it’s likely going to be there for decades.

"It’s not a monster job creator," said Gombeda, noting that plans call for 20 to 30 high-wage jobs.

But that’s all right, he said, because the county wants energy to be a component of its economic identity but not the only component.

"We want to diversify," he said.