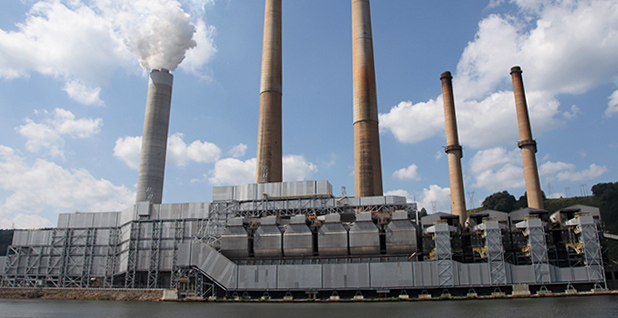 A new law in Ohio that received support among Trump allies is now buoying the ongoing operation of the W.H. Sammis Power Plant in West Virginia — a facility that takes coal from the mining operations of a President Trump fundraiser and supporter, coal executive Bob Murray. First Energy

A new Ohio energy law originally intended to maintain carbon-free energy has another beneficiary — one of the state’s most-polluting power plants, with ties to coal executive Bob Murray.

After lobbying to convince lawmakers to subsidize its Ohio nuclear plants because they produce most of the state’s zero-carbon energy, Akron-based FirstEnergy Solutions said on Friday that an energy law enacted last week would also enable the company to keep 1,490 megawatts of coal-fired generation running at its W.H. Sammis plant near Stratton. The law, known as H.B. 6, will funnel subsidies to power plant owners (Energywire, July 24).

In a release, FES said that the decision was "driven by the efforts to improve the operational reliability of Sammis which allows us to preserve jobs and ensure the economic health of the plant."

Murray Energy Corp., of which Murray is CEO, supplied all the coal shipped to the Sammis plant in the past year, according to federal data. The coal company has also worked for at least five years with FirstEnergy Solutions to keep the plant running.

Exactly how the $150 million a year in nuclear subsidies helps insolvent FES continue operating the largest units at the challenged coal plant beyond their planned 2022 retirement isn’t clear.

What is clear is that the new Ohio energy law now aligns with an agenda advanced by the coal industry, President Trump and his political allies in the Buckeye State and directly benefits Murray, who hosted a fundraiser last week with Trump and Ohio Gov. Mike DeWine (R) in nearby Wheeling, W.Va. (Energywire, July 26). Trump has pressed the Department of Energy to boost struggling coal plants, including through a now-failed attempt at the Federal Energy Regulatory Commission.

"This was not what it was sold as at all," Neil Waggoner, an advocate with the Sierra Club’s Beyond Coal campaign in Ohio, said about the FES development. "It was always about the nuclear plants. It was never about providing a bailout for a bankrupt company to keep all of their generation online.

"This is absolutely stunning. But politically speaking, look at who’s providing the coal," Waggoner added.

At least one Trump ally was actively pushing to get the law enacted in Ohio.

Bob Paduchik, currently serving as chairman of Trump’s 2020 reelection campaign in Ohio, told The Plain Dealer in May that he had made calls as a private citizen — not on behalf of the White House or industry — to shore up support among Republicans.

Paduchik, a former Energy Department official under the George W. Bush administration who also worked for the coal industry at one time, told the Cleveland newspaper that people ask for his advice and his opinion on politics but also on electricity and power issues. He also emphasized the importance of keeping open Ohio’s nuclear plants, the Perry and Davis-Besse reactors.

"Honestly, I think diversity in electricity generation is a strength in this nation, and I’m concerned that we lose that in Ohio if we shut down these two plants," he said.

Coal interests also backed the law. Michelle Bloodworth, president and CEO of the American Coalition for Clean Coal Electricity, said in an email that Ohio legislators were forced to pass legislation because of "inaction" by FERC and grid operator PJM Interconnection to "define and value fuel security."

But Todd Snitchler, a former Republican Ohio legislator and utility regulator who heads the Electric Power Supply Association, said the passage of H.B. 6 means other Ohio power plants that don’t receive subsidies must now compete against one that —- without financial aid — would have closed.

"That changes fundamentals in the marketplace," Snitchler said.

"It is clear that FES extended a significant lobbying campaign that was ultimately successful," he said. "In the end, the bill harms the competitive marketplace — and for EPSA members, that has a profound impact and can’t be understated."

In 2014, FirstEnergy Corp. asked the Public Utilities Commission of Ohio (PUCO) to subsidize the Davis-Besse plant, Sammis and the utility’s stake in two other 1950s coal plants on grounds that the plants’ "economic viability" was in doubt and that the plants provided fuel diversity, reliability and economic benefits to the state.

The utility’s former generating subsidiary, FES, later petitioned the Department of Energy to rescue Sammis and other coal and nuclear plants in PJM under the Federal Power Act. Murray Energy submitted comments to DOE in support of the request.

Murray also floated the idea of buying Sammis and other coal-fired plants in the region. And the coal executive’s company lobbied Ohio lawmakers in support of H.B. 6.

The hulking Sammis plant, on the Ohio River near the West Virginia border, includes 12 coal- and oil-fired units of various sizes that came online between 1959 and 1972.

Like at other coal plants in the region, electricity production at Sammis has declined in the face of competition with abundant natural gas from nearby shale formations. But the plant is still emitting the equivalent of 6.5 million tons of carbon dioxide in 2017, the last year for which data is available, making it the sixth-largest source of CO2 in Ohio.

FES, which filed for bankruptcy in March 2018, announced last summer that it would deactivate four fossil fuel-fired plants in 2021 and 2022, including almost 1,500 MW at Sammis. That’s on top of the two Ohio nuclear plants it planned to shut down.

While Ohio lawmakers scrambled to save the Davis-Besse and Perry nuclear plants, the fate of Sammis seemed clear. There was no debate about keeping the coal plant running during months of committee hearings on H.B. 6, and FES officials didn’t bring it up in testimony to lawmakers.

However, John Judge, the company’s CEO, told local reporters last month at a "hastily arranged" meeting in Steubenville that the company would rescind the deactivation of the Sammis plant if H.B. 6 passed, according to the Ohio-based Herald-Star newspaper.

Company spokesman Tom Becker didn’t elaborate. But he confirmed what Judge said — that H.B. 6 would free up $40 million to $50 million needed "to get the big units of the plant running reliably as they used to."

Asked about H.B. 6 at last week’s fundraiser for Trump, Murray said the law "got watered down in the [Ohio] Senate."

H.B. 6 opponents question how FES, struggling to climb out of bankruptcy, has millions of dollars to invest in Sammis, because the intent of the new energy law was to keep two nuclear plants running for the purpose of preserving Ohio’s largest source of emissions-free energy.

At a minimum, FES should be required, as part of the bankruptcy proceedings, to ensure it has funds set aside for the cleanup of old coal plant sites and nuclear decommissioning before it’s allowed to invest in the Sammis plant, said Howard Learner, executive director of the Environmental Law & Policy Center.

"H.B. 6 should not become a slush fund for FirstEnergy Solutions to use however it wants," he said.

A provision in the new energy law requires an annual management and financial review of FirstEnergy Solutions by PUCO in return for receiving as much as $150 million annually from 2021 to 2027.

PUCO also has authority to reduce or eliminate the nuclear subsidies (which come from surcharges of up to 85 cents a month for the typical residential energy user) to ensure FES doesn’t receive a windfall on the backs of Ohio utility consumers.

FES and the coal industry argue that keeping plants like Sammis in operation is necessary for reliability and "fuel security," or the idea that the PJM grid is becoming over-reliant on natural gas.

PJM has rebutted the assertion, finding that there’s "no imminent threat" to grid reliability and resilience as coal and nuclear power plants close.

"Ohio did what it thought was necessary to save fuel-secure sources of electricity, which are retiring at an alarming rate," said Bloodworth of the American Coalition for Clean Coal Electricity.