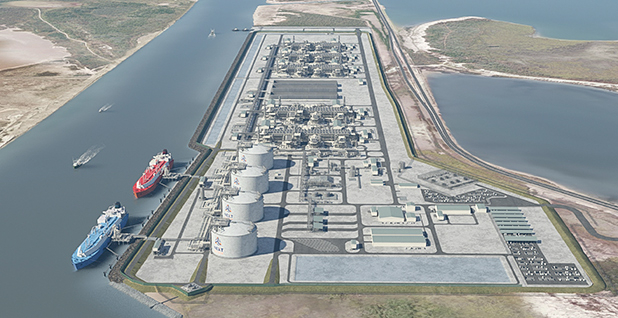 Yesterday, liquefied natural gas company NextDecade Corp. announced the formation of a new subsidiary, NEXT Carbon Solutions LLC, and said that division is expected to develop a carbon capture and storage project at the planned Rio Grande LNG project, pictured above. NextDecade Corp./LinkedIn

A liquefied natural gas company and an energy coalition backed by a division of BlackRock Inc. announced separate major carbon capture projects this week, advancing the oil and gas sector’s interests in the technology.

The project is expected to initially include over 1,200 miles of new CO2 pipelines, the companies said, and would be capable of permanently storing up to 5 million metric tons of captured CO2 per year from industrial emitters. The system could someday be expanded up to 8 million metric tons of greenhouse gas per year, the announcement said.

The project aims to "provide biorefineries and other industrial participants a long-term, economic path to materially reduce their carbon footprint while maximizing the value of their end-product in a cost-effective manner that is safe for the environment," the partnership said. The project could be operational in the Midwest by the end of 2024, the companies said. A cost was not immediately disclosed.

"This project is an example of how, ideally, the next generation of carbon capture, removal and storage facilities will be developed, across multiple states, aggregating CO2 for permanent storage from multiple emitters using shared infrastructure, while also creating regional economic opportunities," Beck said in an emailed statement.

According to the announcement, Navigator, an independent midstream company based in Dallas, is expected to spearhead the system’s construction and operation. Matt Vining, Navigator’s CEO, called the endeavor "a unique infrastructure project that changes the way carbon emissions are managed."

A BlackRock spokesman declined to comment beyond the information in the release.

‘A bigger plant than most’

NextDecade said a newly formed subsidiary, Next Carbon Solutions LLC, will develop the project, which aspires to be "one of the largest" carbon capture and storage initiatives in North America, according to a company press release. NextDecade suffered a blow in November after a French company pulled out of a $7 billion deal to import its LNG over reported concerns about greenhouse gas emissions (Energywire, Nov. 4, 2020).

NextDecade said the carbon capture project is expected to cut "permitted CO2 emissions at Rio Grande LNG by more than 90 percent" and would enable the capture and permanent geologic storage of over 5 million metric tons of CO2 per year.

John Thompson, the technology and markets director at the Clean Air Task Force, said trapping 5 million tons per year would make the project "a bigger plant than most."

In a virtual presentation yesterday, Matt Schatzman, NextDecade’s chairman and CEO, said the company is "no longer only an LNG company," but a clean energy company "accelerating the path to a net-zero future."

"Natural gas in the form of LNG will play an important role in the global transition to a net-zero future, but its carbon footprint must be reduced to an absolute minimum," Schatzman said. "Efforts to reduce global greenhouse gas emissions are at the very foundation of our company."

In the presentation, NextDecade said the majority of CO2 emissions at the proposed export facility will come from its gas turbines. The company said CO2 from exhaust gas off the turbines would be stripped with amine solvents as part of the capture process.

"All-in costs of the CCS project are expected to be: $63 to $74 per [metric ton] of CO2 prior to Section 45Q tax credits" and $13 to $24 with the federal tax credit, relying on $50 under the credit for saline sequestration of CO2, the company said.

Rather than adding CCS as part of a retrofit effort, simultaneous development of the project and Rio Grande LNG makes it 60% to 80% less capital-intensive than retrofitting an operating facility, according to the presentation materials.

Schatzman said he believes NextDecade is "offering the market, especially in Europe, a very low [greenhouse gas] LNG product that fits extremely well with the [European Union]’s plans to reduce carbon intensity of their energy that they consume."

Storage of the CO2 is expected to be near the LNG site, somewhere in the Rio Grande Valley.

Ivan Van der Walt, senior vice president of engineering and construction at NextDecade, said the geology in South Texas is "extremely favorable for permanent geologic storage of the CO2" and that the company didn’t see any problem in securing geologic storage.

NextDecade said it anticipated securing a final investment decision (FID) on the carbon capture project "soon after" its FID at Rio Grande LNG, according to its announcement.

In a report this week, research firm ClearView Energy Partners LLC spoke to the scrutiny U.S. LNG exporters face from European consumers. The analysis said the return of strict methane performance standards could "help to assuage the emissions concerns of regulated-economy importers."