Oil and gas industry goes in big for Trump 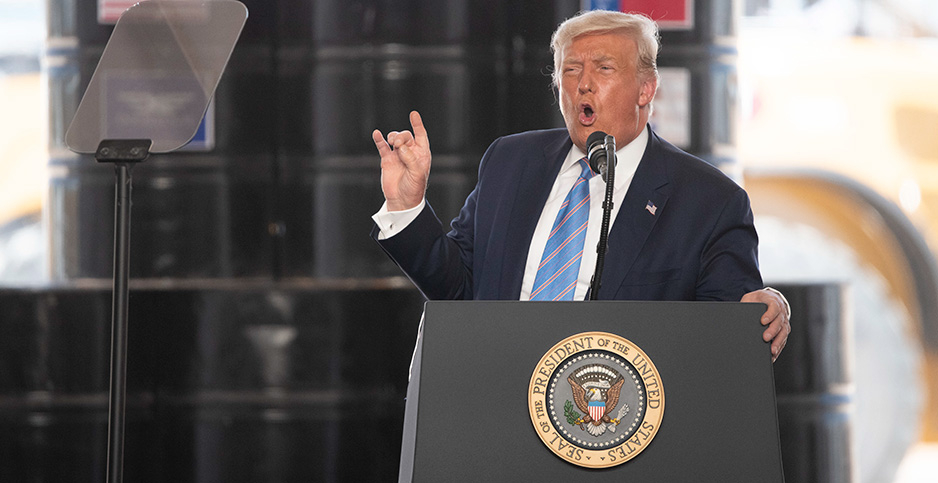 The oil and natural gas industry has a clear favorite in the 2020 presidential election: Republican Donald Trump.

Trump’s reelection campaign has brought in at least $1.9 million from donors in the oil and gas industry since his 2016 election, according to the Center for Responsive Politics’ analysis, which includes Federal Election Commission data on donations through the end of August.

That total, with more than two months left in the election season, exceeds the $1.2 million industry executives and workers gave Trump in the entire 2016 campaign cycle, CRP records show.

Joe Biden, Trump’s Democratic challenger, has gotten just $623,700 from oil and gas as of August. By comparison, Hillary Clinton, the 2016 Democratic nominee, wasn’t far behind Trump’s receipts from the industry, with $1 million.

The totals don’t include outside groups like super political action committees and hybrid PACs, such as America First Action, the Great America PAC and the Committee to Defend the President on the GOP side, and Priorities USA Action and Unite the Country on the Democratic side.

Those organizations can raise and spend unlimited amounts of money. While they have to disclose donors, they can also take cash from "dark money" groups that do not disclose donors.

With super PACs and hybrid PACs included, Trump’s total oil and gas support would be $12.8 million in the 2020 cycle, the Center for Responsive Politics said, not accounting for the hidden dollars.

In the wider money race — which is nearly certain to be the most expensive one in history — Biden is ahead.

Among Trump’s biggest financial backers in the oil and gas world is Kelcy Warren, the chairman of pipeline giant Energy Transfer LP and its CEO until earlier this month.

Warren cut a $10 million check to America First Action, a pro-Trump super PAC, in August; gave the president’s campaign $720,000 with his wife, Amy, last year; and held a fundraiser for Trump at his Dallas home this summer.

Energy Transfer developed the Dakota Access pipeline with the help of a Trump order in 2017, and while Biden hasn’t said whether he would seek to shut the line down if elected, he is under significant pressure to do so. Energy Transfer didn’t return a request for comment for Warren.

"I believe that the upcoming election is the most important in a generation," Warren told Forbes in June about his support for Trump.

"My belief is that the best path forward at this time is to continue the economic and energy policies developed under the leadership of President Trump, which have created job growth here at home, secured our position as a dominant energy-producing nation and produced a more balanced economic platform for our country globally," Warren said.

Harold Hamm, a longtime ally and former adviser to Trump, has also given big to the president’s reelection efforts, with at least $500,000 to Trump’s campaign and supporting PACs. Hamm led Continental Resources Inc. until earlier this year and is still its executive chairman.

The fact that Trump would benefit from oil and gas donations is, in many ways, not surprising. Despite corporate America’s occasional complaints about Trump’s off-the-cuff governing style and policy pivots — like his decision last month to take offshore drilling off the table for much of the Atlantic coast — he’s generally been good for business, mainly by rolling back environmental regulations and cutting taxes.

"Without Trump, the industry would have likely faced regulatory strictures on oil and gas production, transportation, combustion and consumption. Historians may debate if whether deregulating production at a time of weak demand helped industry fortunes, but Clinton’s policies might have brought higher production costs and fewer, slower permit approvals," he said.

Book summed up the stakes of the election as one of molecules versus electrons. "Trump wants to keep moving molecules to markets. A Biden administration would seek to expedite a transition to electrons."

Biden last year signed onto the No Fossil Fuel Money Pledge, a project by environmentalists to get candidates to promise not to take donations above $200 from fossil fuel company executives or lobbyists.

He wants to decarbonize the electricity sector by 2035, get the economy to net-zero greenhouse gas emissions by 2050, and ban all new permits for fossil fuel extraction on federal lands and offshore, among other proposals.

During a televised town hall event last night, Biden said he broke with the Green New Deal because he didn’t think it was possible to go carbon free by 2030. The former vice president touted a number of carbon reduction proposals instead (Climatewire, Oct. 16).

"It’s no surprise that Trump has exceeded his 2016 fundraising with Big Oil CEOs as he’s been doing their bidding since he stepped foot in the White House," said David Turnbull, spokesman for Oil Change U.S.

"With massive deregulation and rampant climate denial, the Trump administration has done all it can to help the executives at the top of the industry, while ignoring workers and communities dealing with a volatile oil market and ever-increasing climate disasters."

"The contrast with Biden couldn’t be clearer," he said. "While Trump is doing whatever he can to pad the pockets of his accomplices in the C-suites of the oil industry, Joe Biden and Kamala Harris have taken the No Fossil Fuel Money Pledge and are focused on fundraising through record-breaking grassroots support."