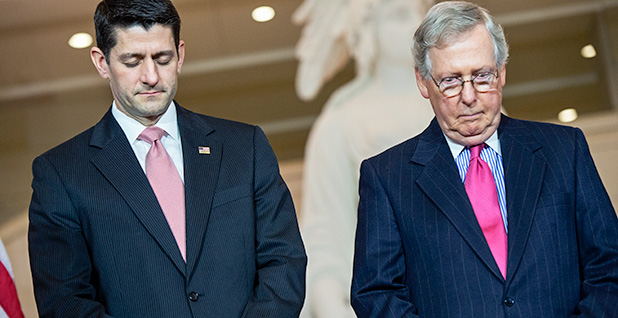 House Speaker Paul Ryan (left) and Senate Majority Leader Mitch McConnell at a Congressional Gold Medal ceremony in February. Oil and gas executives are focusing their political donations on maintaining congressional majorities, which would keep Ryan (R-Wis.) and McConnell (R-Ky.) in power. The industry is largely sitting out the presidential race. Photo courtesy of AP Images.

Oil and gas executives are pouring record amounts of money into electing Republicans this year, even though they’re largely sitting on their wallets in the presidential race.

Oil and gas has pumped more than $70 million into federal races so far this year, according to OpenSecrets.org. But Democratic presidential nominee Hillary Clinton and GOP nominee Donald Trump have picked up less than $1 million of that (Greenwire, Sept. 7). Clinton seems hostile to their interests, and although Trump offers kind words, the industry’s politically active members figure he can’t win.

So instead, they’re pouring their money into the Republican effort to keep control of Congress.

"The executives of these companies are pragmatic," said one energy industry executive. "There’s a recognition that you’re going to have to work with the [Clinton] White House. So you put your money where you can make a difference."

He added that oil executives have many reasons to worry about Democratic control of Congress, or even just the Senate. They might shudder to think of climate change hawk Sen. Sheldon Whitehouse (D-R.I.) leading a committee.

"If Sheldon Whitehouse has a gavel, he’s going to be hauling energy CEOs up there all the time for hearings," he said.

Overall, oil and gas contributions are up 50 percent over the $42 million the industry contributed by this point in 2012, according to OpenSecrets.org, a nonpartisan website run by the Center for Responsive Politics. That includes money to outside groups, but not so-called dark money.

The increase is largely from what’s called "outside spending" — contributions to groups that disclose their donors but cannot coordinate with candidates. For example, oil and gas has put $4.25 million into the Senate Leadership Fund, which is working to defeat Democratic Senate candidates.

The industry’s congressional giving is more partisan than ever, with 90 percent of the money from individuals and political action committees going to Republicans.

That reflects the increasingly partisan nature of the energy debate. But it also reflects the hollowing out of the middle in Congress, said Stephen Brown, vice president for federal government affairs at oil refiner Tesoro Corp. The centrist Democrats who supported fossil fuels are a vanishing breed.

"The industry has been and is comfortable giving to Democrats who support it on key issues," said Brown, a rare Democrat in the upper ranks of the oil business. "The challenge is that there are just fewer of them and thus no middle to grab onto anymore."

But Sen. Ted Cruz (R-Texas) got huge support from one oil and gas family: Dan and Farris Wilks, founders of Frac Tech Services, donated $15 million to a super PAC supporting him.

In the home stretch this year, billionaire oilman Harold Hamm hasn’t been shy about stumping for Trump. But his financial support so far lags behind what he put into the unsuccessful effort to elect Mitt Romney in 2012.

Hamm, founder and CEO of Continental Resources Inc., has contributed $5,400 directly to Trump’s campaign and has given about $233,000 to the Republican National Committee since endorsing Trump in April.

He gave nearly $1 million to the super PAC supporting Romney called Restore Our Future in April 2012.

Clinton has received $623,817 from oil and gas interests, according to the OpenSecrets.org analysis of Federal Election Commission data. Trump has received $320,621, about half as much as Clinton.

Trump Victory, the super PAC supporting Trump, has also gotten significant support from the former head of another oil company — in Russia. According to OpenSecrets.org, Simon Kukes gave $149,000 to Trump Victory. Kukes, who was born in Russia and became a U.S. citizen in his 20s, ran Yukos Corp. when it was owned by the Russian government. Yukos is now defunct.