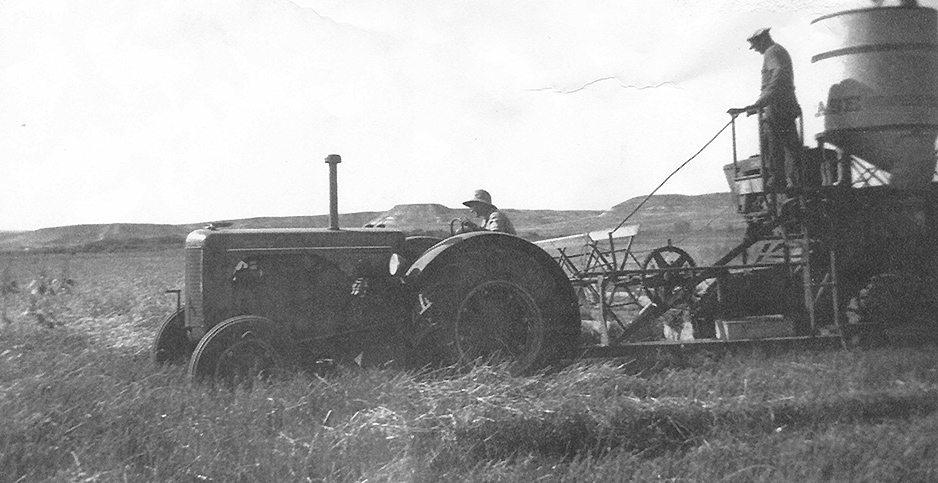 An undated photo shows J.T. Wilkinson and another man working on the family farm along the Missouri River in North Dakota, before the Army Corps of Engineers bought the land as part of Lake Sakakawea. Photo provided by the Wilkinson Family

This month, a district judge in North Dakota reversed himself and cleared up a 7-year-old ownership dispute in the Bakken Shale oil field that pitted the descendants of a farming family against the state government.

In the short term, the ruling could help the children and grandchildren of J.T. and Evelyn Wilkinson, who farmed a tract along the Missouri River until the 1950s. They fought with the state’s Board of University and School Lands about claims on the proceeds from the same tract of underground mineral rights used in oil and gas operations — leaving about $600,000 in royalties tied up in an escrow account.

State District Judge Paul Jacobson’s order was unequivocal: "The state of North Dakota has no interest, title or claim to the Wilkinsons’ property."

But the case — which made it to the state Supreme Court and spurred two state laws — also underscores how the nation’s oil boom intersects with small landowners who often don’t have the money or expertise to fight for their share in court.

Experts warn that disputes over mineral rights have been part of the oil industry’s history since the 1860s, and there are likely to be more conflicts as long as the drilling boom continues in North Dakota’s Bakken Shale play and beyond. Overall, the state has contested the ownership of about 3,000 parcels along the Missouri, and about $229 million of contested royalty payments are being held in escrow accounts while those disputes are settled. While the cases may be a dent in oil company profits, they are changing the lives of many landowners in the path of drilling.

"It seems like something that’s going to continue and continue," said Preston Page, an oil producer and consultant who has studied ownership records in the Bakken field.

In North Dakota and other oil-producing states, it’s common for a piece of property to have separate owners for the surface and for the underground mineral rights. And while most people instinctively understand the basics of buying and selling surface land, mineral rights are an arcane topic and come with their own specialized set of laws and precedents.

The oil patch abounds with stories of people who complained they were shortchanged, or inherited a windfall because an ancestor hung onto the mineral rights to an old family farm. In Texas, for instance, an extended family spent 15 years in court claiming they owned a share of the mineral rights to Padre Island, a resort community on the Gulf of Mexico.

That family traced its lineage to a Mexican priest and his nephew in the 1820s, Nicolas and Juan Jose Balli, and said they were swindled out of their inheritance more than a century later. The family won in a jury trial, but the case was overturned by the Texas Supreme Court in 2008.

"My gut feeling is, it’s a slow, slow process, and there’s a lot of money at stake," said Page about mineral rights claims.

The Wilkinson case has been simmering for almost a decade, when state officials claimed the family’s property, saying it lay below the river’s high-water mark and was therefore part of the state-owned riverbed.

But the roots of the dispute go much further back in time.

The Wilkinsons farmed 286 acres along the river’s northern bank near the town of Trenton until 1958, when they sold the property to the Army Corps of Engineers, which was damming the river to create Lake Sakakawea.

The family held onto the mineral rights to the property, even though the Army Corps owned the surface and the land was periodically flooded when water rose in the lake.

Over the years, the Wilkinsons, their children and eventually their grandchildren leased the land for oil and gas production a few times.

Then the Bakken Shale oil boom happened. New techniques made it possible to wrench large amounts of oil from layers of rock that lay deeper than previous oil fields. Between 2005 and 2010, the state’s oil production almost tripled, and it hit a record of 1.4 million barrels a day this year.

The Wilkinson family, most of whom no longer live in the Bakken region, leased their mineral rights again, and a Texas-based company drilled a horizontal well in 2010 that accessed the tract from a bluff above the Missouri River’s floodplain.

The family expected to start receiving royalty checks once the well was completed, but never did. It turned out the state land board had leased the drilling rights to the same tract.

"We were absolutely blindsided," said Lana Sundahl, a retired dentist in Washington who is a granddaughter of J.T. and Evelyn Wilkinson.

The family sued in 2012, asking a court to settle the title dispute. Several other mineral owners filed similar lawsuits.

The cases dragged on for years while both sides argued over the location of the river’s historical high-water mark.

It sounds like a simple decision — anything above the line is privately owned, anything below the line is part of the riverbed and belongs to the state. But property boundaries along rivers are notoriously hard to determine. And in North Dakota, many of the original landmarks on the Missouri River are submerged under Lake Sakakawea.

In the Wilkinson case, the state land board said the river’s current high-water mark is the boundary — the one created after the Missouri was dammed — and should be the dividing line. The Wilkinsons argued that the court should recognize the historical high-water mark prior to the dam’s construction.

The Wilkinson family alone has spent an estimated $500,000 on attorneys and experts, almost as much as it expects to gain from the disputed oil and gas production, Sundahl said.

"I’ve literally had clients die during this case," said Josh Swanson, an attorney who represents the Wilkinsons and other mineral owners.

The court sided with the state in an original summary judgment, but the state Supreme Court sent the case back for reconsideration in 2017.

By that time, the state Legislature had gotten involved. It passed a law that says the state-owned property ends at the Missouri’s historical high-water mark, not at the edge of the modern-day lake. It required the state to conduct a survey based on historical photos and other records showing the river before the lake was filled.

The state Supreme Court ordered the district court to reconsider the Wilkinsons’ claim in light of the new law, and Jacobson, the trial court judge, agreed that the new law trumped the state’s arguments.

Meanwhile, a second law enacted this year requires a second study to determine how many acres are above and below the high-water mark. That survey is underway.

It’s still likely to be a complicated process, said Jodi Smith, the head of the state land board. The second survey is expected to be completed in June 2020, and it’ll likely change the ownership of 16,000 acres.

Some tracts have as many as 50 owners, Smith said. And redetermining the high-water mark could lead to conflicts among oil producers, since the mark is sometimes used as a boundary when companies pool their acreage to create a large drilling unit.

The Wilkinson family are also hoping to recover some of their costs for pursuing the suit. And they’re still frustrated at the way the state land board dragged out the case, Sundahl said. Some of her relatives will never get to see the results of the lawsuit.

"My mother had to spend the final six years of her life using her life savings to fund a lawsuit against the state to regain what has always rightfully belonged to the Wilkinson family," she said.