Oil CEO: ‘We will disappear … like the coal industry’ 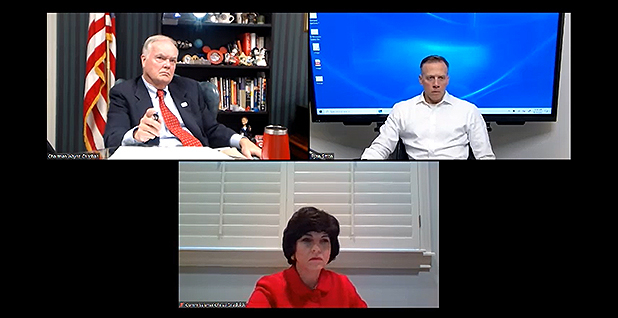 The oil industry was sharply divided yesterday as Texas regulators weighed the first proposed oil cut since the 1970s to address the novel coronavirus pandemic and economic slowdown.

Small oil producers that helped create the shale drilling and fracking boom that turned the United States into the biggest oil-producing country have said a production cut is the only way to save thousands of jobs among independent drillers.

Two companies, Pioneer Natural Resources Co. and Parsley Energy Inc., asked the Texas Railroad Commission to curtail the state’s output by 20%, acknowledging that the free market system can’t cope with the economic downturn. They were joined at a commission hearing by dozens of other small and large oil companies to debate the plan.

Small companies and the service companies they rely on face the biggest risk of failure in the downturn, Parsley Energy CEO Matt Gallagher said.

"The domestic energy sector and energy security is at stake," Gallagher said. "It was the small producers who fostered innovation."

Yet larger oil producers and the state’s powerful trade associations opposed the idea, saying market forces are already driving down production. Texas, which produced about 5.3 million barrels of crude a day in January, accounts for about 40% of U.S. production.

The oil industry has already announced spending cuts that amount to $50 billion — not including privately owned companies that don’t have to report their finances, said Todd Staples, president of the Texas Oil and Gas Association. Those cuts will likely lead to production cuts of 1.8 million barrels a day.

"That’s the way markets should work," he said.

The three-member Railroad Commission won’t make a decision until next week, but the hearing itself — which was held via videoconference because of social distancing guidelines — demonstrates how seriously the commissioners are taking the oil downturn.

More than 50 people testified, evenly split between supporters and opponents of setting production limits. About 20,000 people tuned in to the hearing at its peak, the commission said.

The commissioners questioned witnesses about several aspects of the proposal — how to enforce it, whether it would violate antitrust laws, whether to set limits at the company level or the wellhead — but gave no indication which way they’d vote.

Separately, the Oklahoma Corporation Commission is scheduled to hold its own hearing on production cuts May 11 after getting a request from a group of small producers.

Both Texas and Oklahoma used to set allowable levels of oil production in their states, a system known as pro-rationing. Oklahoma stopped the practice in the 1950s, and Texas issued its last pro-rationing order in 1973.

Since the outbreak began, though, the benchmark price for U.S. oil has fallen by more than half, to about $21 a barrel yesterday, and oil producers said they’re being paid even less for oil produced in parts of Texas’ Permian Basin.

The travel restrictions and other steps taken to stop the spread of the virus are projected to cut oil consumption by at least 25% and maybe more than 30%. While an international deal involving OPEC’s members, Russia and other countries is projected to cut oil production by about 10% above pre-crash levels, it’s not enough to offset the drop in demand (Energywire, April 13).

The Trump administration, which has been under pressure to preserve jobs in Texas and other oil-producing states, helped negotiate the OPEC deal and has said that as much as 20 million barrels of production will be cut as private companies shut down their operations.

Environmental groups have asked the Texas commission to use the pro-rationing process as an opportunity to clamp down on gas flaring from oil production.

Mark Houser, who oversees production from 1.4 million acres in Texas as head of the University Lands department, also urged the commission to act on flaring and said it’s uneconomical to produce oil at the current price. His staff has already called producers who operate on state-owned land and offered them flexibility to slow down.

"To sell at these prices is just not acceptable," he said.

The American Petroleum Institute has opposed direct intervention by the federal and state governments, and testified against the proposal in Texas.

"A Texas quota system imitating OPEC is not the answer to the challenges facing the industry and would only penalize the most efficient producers and create long-term negative consequences for American energy leadership," API President Mike Sommers said in a statement.

If the Railroad Commission curtails statewide production, Marathon would have to shut in its best wells, Tillman said.

"We are not living in the energy market of the 1930s when these rules were written," he said.

Small companies like Bluefin Resources LLC, which operates conventional wells in South Texas, are concerned that they’ll be muscled out of the market by pipeline companies and other middlemen who prefer to buy oil in bulk.

"If we’re all going to eventually have to shut in, why don’t we try to help ourselves in the way of putting the Railroad Commission in charge of it, where everybody’s treated equally?" Bluefin co-founder Scott Stanford said in an interview before the hearing.

Pioneer Natural Resources CEO Scott Sheffield, whose company is one of the biggest producers in the Permian Basin, said the oil market has always required some kind of regulation, whether it was by states like Texas or OPEC. Without it, he said, companies often can’t help but overproduce, forcing investors and financers to walk away from the industry.

"Nobody wants to give us capital because we have all destroyed capital and created economic waste," Sheffield said. "After 35 years as a CEO, I’ve never seen a free market.

"If the Texas Railroad does not regulate long term, we will disappear as an industry like the coal industry," he added.

"We’re going to save hundreds of thousands of jobs for our energy industry, in Texas, North Dakota, Oklahoma," he said.

He also listed a number of energy companies as among the industry leaders that the White House will consult as it looks to reopen the U.S. economy.

They were named to 17 of what the White House is calling its "Great American Economic Revival Industry Groups."

The White House said the groups include "esteemed executives, economists, scholars, and industry leaders" who will work with the administration "to chart the path forward toward a future of unparalleled American prosperity. "