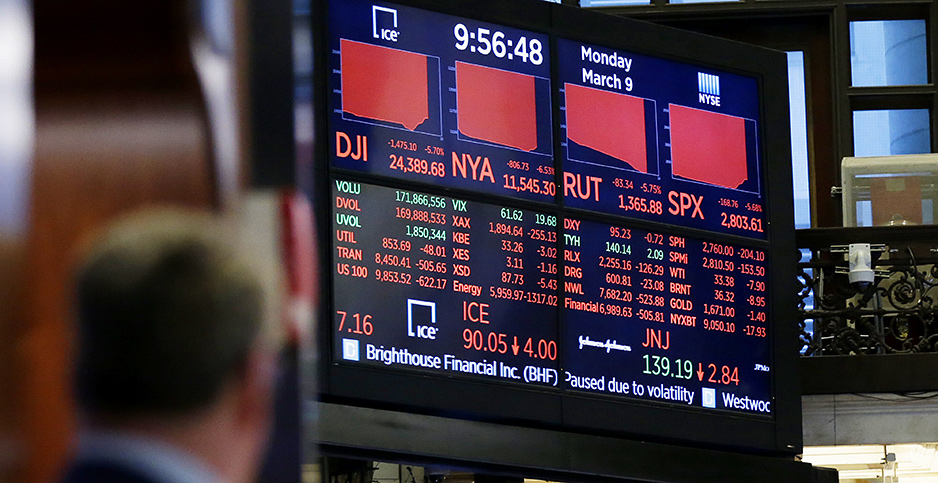 A trader stands on the floor of the New York Stock Exchange after the opening bell on Wall Street in New York City today. Trading was halted for 15 minutes in the morning after a steep market drop. John Angelillo/UPI/Newscom

U.S. oil fell 20% to $33.16 a barrel, causing massive losses for shares in energy companies. The sell-off spread to the broader economy, with the S&P 500 falling 7% before trading was temporarily halted.

The petroleum plunge followed Russia’s refusal last week to join the OPEC cartel in production cuts aimed at supporting prices. Thwarted in its bid for cuts, Saudi Arabia sharply changed course by cutting prices and signalling it would ramp up production.

President Trump took to Twitter to blame the international oil spat for triggering the market’s plunge. "Saudi Arabia and Russia are arguing over the price and flow of oil. That, and the Fake News, is the reason for the market drop!" he tweeted.

Ed Hirs, an economist at the University of Houston, said the outbreak of COVID-19, caused by the new coronavirus, helped push the world’s economy — and the oil market — into a nosedive, but it was only the last of several factors.

"Lots of people will of course point to the virus as the catalyst," Hirs said. "Really, the virus is probably the straw that broke the camel’s back."

Saudi Arabia and its Middle East allies had been working for years with Russia to prop up oil prices by cutting production. They were already losing their grip on the market because of the Trump administration’s trade war and the general slowdown in the world economy, Hirs said.

The International Energy Agency said demand for crude oil in 2020 would be lower than in 2019 — the first year-over-year drop since 2009.

China, where the coronavirus outbreak began, was responsible for most of the growth in oil demand in the last few years. Since the virus began to spread, China has accounted for most of the slowdown in oil consumption.

"The immediate outlook for the oil market will ultimately depend on how quickly governments move to contain the coronavirus outbreak, how successful their efforts are, and what lingering impact the global health crisis has on economic activity," the IEA said in a statement.

The long-term impact on American energy and climate policy is unclear as experts struggle to figure out how long the decline will last. Some analysts are expressing concern that U.S. shale producers could be hard hit.

The Trump administration in recent days has moved to temper fears around the market turbulence and spread of the new coronavirus despite a growing number of confirmed cases from coast to coast.

Energy Secretary Dan Brouillette said Friday at the U.S. Chamber of Commerce that the initial impacts of the virus on the energy markets or the production of energy, up to this point, have been marginal.

"Now we’ll continue to watch the developments over the course of the next one, two, three, four weeks or months, as this thing begins to play itself out around the world," he said. "But I think it’s important for us to understand that many of these events are very short-term in nature."

Brouillette said then that he expected to see "perhaps a modest dip in the demand for oil and gas around the world" before markets would rebound.

When asked whether the Trump administration is considering potential aid to the energy sector if the oil sector contracts due to the coronavirus, Brouillette said he hadn’t been part of any such conversations.

Israel’s minister of energy, Yuval Steinitz, who spoke to reporters with Brouillette, sounded a bit more skeptical and said the virus, should it continue to spread unchecked for months, could trigger a global crisis or recession reaching far beyond the energy sector.

"Surely, hopefully, this crisis won’t last for decades, but only for days or weeks or months," Steinitz said. "Let’s remain optimistic."

Brouillette said his motto is "optimistic and aggressive," noting the work that several of DOE’s national laboratories are doing on the coronavirus.

"The long-term demand outlook remains strong and American oil and gas companies produce based on demand, while planning for short term disruptions in the market," American Exploration & Production Council CEO Anne Bradbury said in a statement.

"We plan and structure our operations to be nimble, as we continue to operate safely and efficiently to provide the world with American energy."

Most immediately, the downturn in oil prices could affect a congressionally mandated sale from the Strategic Petroleum Reserve.

The Department of Energy announced two weeks ago that it would conducting a price-competitive sale of up to 12 million barrels from the SPR to meet provisions laid out by Congress in previous legislation.

Bids on that sale are due tomorrow by 2 p.m.

Brouillette told reporters Friday that those sales were going forward, but also that conversations with Congress could be had to potentially push back those sale-date requirements.

Those sale requirements result from the Bipartisan Budget Act of 2015 as well as from the fiscal 2020 spending bill. Congress has used the SPR sales as a means to pay for other legislation, including the modernization campaign to update the SPR for the 21st century.

Established in the wake of the 1970s Middle East oil embargo, the SPR contains 635 million barrels of crude. Nearly half that supply, however, is scheduled for sale in the coming decade.

In addition to those laws, Congress has attached mandatory sales to four other pieces of legislation over the past five years, including efforts on health care research and ways to pay for the 2015 highway bill.

There are efforts underway to delay some of those sales to ensure full-value return.

Senate Energy and Natural Resources Chairwoman Lisa Murkowski (R-Alaska) included measures within her energy package currently on the Senate floor that would delay three of those sale mandates by three years. That largely pushes those sales to 2029 and 2030.