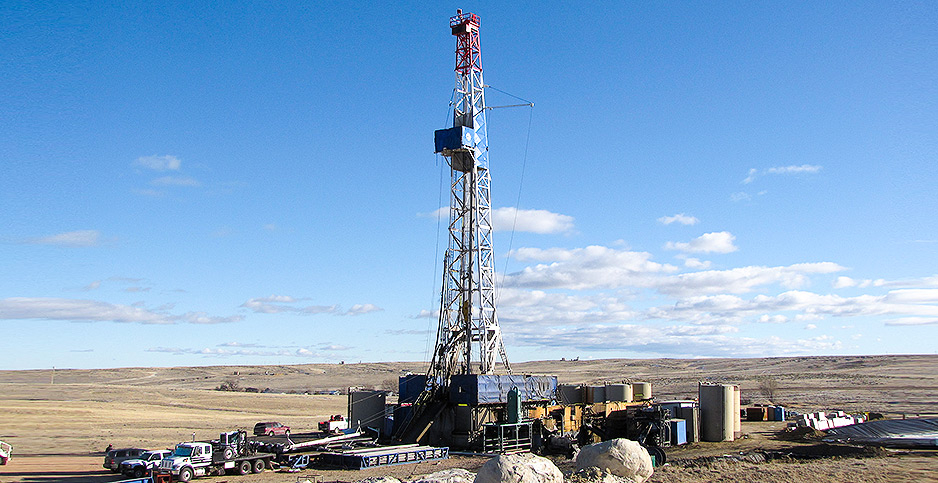 The number of onshore oil spills has declined as the number of drilling rigs in U.S. oil fields has fallen. Department of the Interior

The number of spills and other mishaps at oil and gas sites fell sharply again last year, in line with decreased drilling.

An E&E News review of spill records indicates that spills declined about 17 percent during 2016 compared to the previous year.

Oil field activity, as measured by the Baker Hughes Rig Count, fell about 15 percent. Oil and gas production also declined, but not as steeply.

The review found at least 8,519 spills in 14 producing states. That’s an average of about 23 spills a day across the United States.

The decrease makes sense to Lauren Patterson, a Duke University researcher who authored a study earlier this year on oil and gas spills (Greenwire, Feb. 21). She found that most spills happen in the first three years of a well’s life.

"If there’s fewer new wells, I would expect the number of spills to decrease," Patterson said.

The industry group Energy in Depth said the decline showed that industry efforts to make drilling safer and cleaner are working.

Patterson’s study looked only at wells that have been hydraulically fractured, or "fracked." The E&E review looked at all oil and gas wells in 14 producing states, including conventional wells.

The decline was driven by Texas, which produces the most oil and gas. Spills in the Lone Star State dropped 26 percent. North Dakota had a similar drop. From 2014 to 2016, spills were cut nearly in half in North Dakota.

The drop in Texas could be from companies complying with rules, the slowdown in the industry and other factors, said Ryan Sitton, one of the three elected members of the state Railroad Commission who write and enforce the rules.

"While the Railroad Commission doesn’t control the number of spills, we do have stringent requirements to prevent incidents and a thorough reporting, cleanup and remediation process," Sitton said.

In North Dakota, officials said the number of active wells has been increasing, but the rate of growth has been decreasing.

Nationally, production declined slightly from 2015 to 2016, according to EIA figures for the states where spills were counted. Oil production dropped about 7 percent, while natural gas dropped by about half a percent.

But 2016 production was slightly higher than 2014. Noting that, some in the industry say it’s significant that spills have dropped while production has risen.

"The fact that spills decreased 24 percent from 2014 to 2016 at the same time U.S. oil production increased shows that producers’ continued attention and commitment to safe operations are proving effective," said Seth Whitehead of Energy in Depth, a campaign of the Independent Petroleum Association of America.

Many wells had repeated spills, and the study found that wells that have already had a spill are more likely than others to have another. In Colorado, for example, a spill is 4.6 times as likely at a well that has already had one.

"There is a tendency to have repeat spills," Konschnik said. "The state should be targeting sites that have already had a spill."

The most common pathways for spills were tanks and flowlines, according to the study. They also found that for every 1,000 wells drilled, 12 wells experienced a tank related spill and 11 wells experienced a spill related to flowlines. About one well per thousand had a blowout.

But the study focused on wells drilled relatively recently, and some say it’s older wells that present the greatest threat of spills. Scott Anderson, a senior policy director at the Environmental Defense Fund who previously worked in the oil and gas industry, questioned the idea that drilling activity is the main driver of spills.

Also, as wells produce less and become less profitable, owners are sometimes less willing or able to pay for maintenance. That, he said, can also lead to more spills.