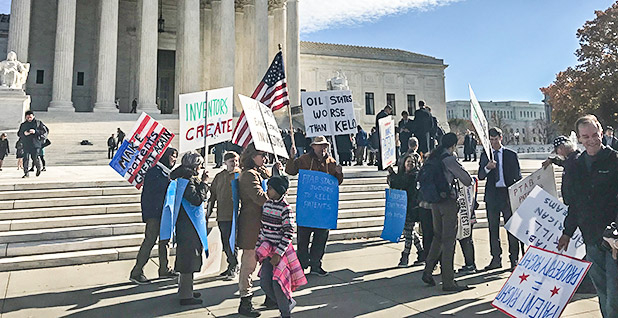 Two oil and gas companies landed at the Supreme Court yesterday in a feud that could reshape how the government handles patent challenges.

The case pits Houston-based Oil States Energy Services LLC against Greene’s Energy Group LLC, also headquartered in Houston, in a constitutional challenge to a 2011 law aimed at streamlining patent disputes. A win for Oil States would help revive the company’s patent on technology that protects wellhead equipment during hydraulic fracturing.

The case has far more sweeping stakes beyond the oil and gas industry, however, as it could uproot a U.S. Patent and Trademark Office tribunal created to referee such challenges and put the disputes back in the hands of federal courts.

At issue is the constitutionality of the Patent Trial and Appeal Board (PTAB), created after Congress passed the America Invents Act six years ago. The law was designed to establish a more efficient process for the agency to correct erroneously granted patents. Instead of going to a district court, patent challengers can now ask the PTAB to take a closer look at whether an issuance was merited.

The case arose after Oil States in 2012 sued Greene’s Energy Group for patent infringement, and Greene’s responded almost a year later with a PTAB petition that challenged the validity of Oil States’ patent. The board sided with Greene’s and scrapped the patent. The U.S. Court of Appeals for the Federal Circuit affirmed the decision.

Lawyers for Oil States argue that the PTAB process violates the separation of powers doctrine because it effectively allows the patent office to conduct judicial proceedings between two private parties over a property right. Plus, the company argues, the system violates its Seventh Amendment right to a jury trial.

Several justices quizzed Oil States on its position. Justice Ruth Bader Ginsburg kicked off the day’s discussion by noting that "there must be" some way for the agency to correct erroneously issued patents. Justice Elena Kagan continued that thread, asking why the court would want to limit a process that would allow the government to fix its mistakes.

Justice Stephen Breyer also grilled the company, noting how common it is for federal agencies to conduct in-house proceedings to settle disputes.

"And, in addition to that, I thought it’s the most common thing in the world that agencies decide all kinds of matters through adjudicatory-type procedures often involving private parties," he said. "So what’s special about this one, or do you want to say it isn’t special and all the agency proceedings are unlawful?"

Morgan Lewis attorney Allyson Ho, representing Oil States, argued that while a re-examination process within the agency would be permissible, a full-fledged judicial-style proceeding between two private parties violates Article III of the Constitution by treading on federal courts’ turf.

Ho said the PTAB system can be particularly problematic because the head of the patent office can "stack" the board with administrative judges likely to reach a favored outcome.

"Our point is that the existence of it, the existence of the panel stacking shows precisely the danger of judges, of decisionmakers, who are subject to executive political influence," she said.

Foley & Lardner LLP attorney Christopher Kise, representing Greene’s Energy, defended the creation of the PTAB. He argued that the board does not act as a federal court but merely re-engages in the patent analysis performed by the agency.

Breyer responded with a hypothetical about the patent-holder’s rights as the board takes a second look at an issuance.

"But suppose that the patent has been in existence without anybody re-examining it for 10 years and, moreover, the company’s invested $40 billion in developing it," he said. "And then suddenly somebody comes in and says: ‘Oh, oh, we want it re-examined, not in court but by the Patent Office.’ Now, that seems perhaps that it would be a problem or not?"

Kise responded that it’s not a problem because patent-holders know that their protections are subject to agency standards. He added that the patent system was designed to benefit the United States, not the inventor.

"It benefits the inventor, certainly, but the paramount public purpose that is embedded in every patent is the advancement of the progress of science," he said.

Judge Neil Gorsuch responded that once a patent is granted, it becomes a private right. Representing the government, Deputy Solicitor General Malcolm Stewart argued that the private right has always been subject to re-examination, and Congress simply adjusted the process through the America Invents Act.

"This is an act of Congress," Stewart said. "It’s entitled to judicial respect."

The litigation has attracted massive interest beyond the oil services companies involved, as the decision will affect how patents are challenged in the future. A slew of business interests, along with many conservative legal scholars, have largely sided with Oil States, arguing that the PTAB represents a serious infringement on property rights.

A few others, including the American Intellectual Property Law Association, submitted briefs in favor of maintaining the PTAB process.