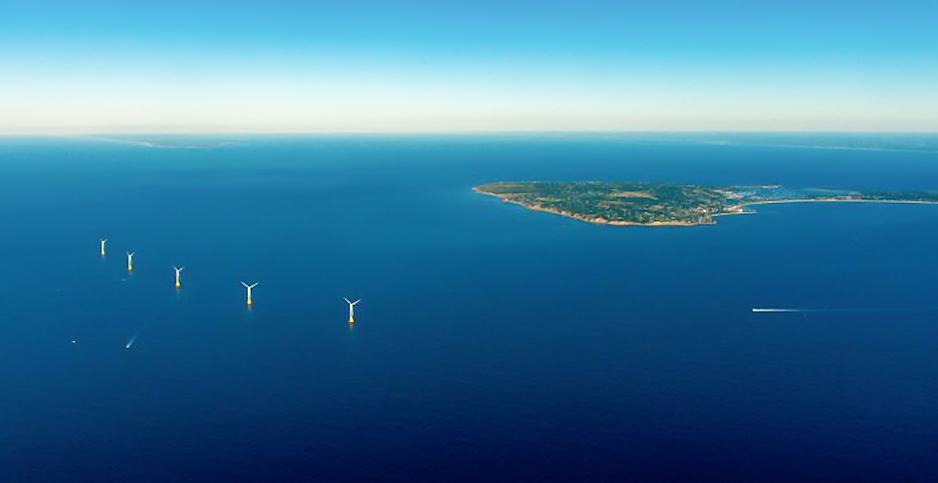 The coronavirus pandemic is testing the oil and gas industry's climate goals. The Block Island wind farm is pictured off the coast of Rhode Island. Deepwater Wind

BP PLC unveiled plans to achieve net-zero emissions by 2050. So did the Spanish oil giant Repsol SA. Royal Dutch Shell PLC was forging ahead into renewable energy forays, and Occidental Petroleum Corp., a giant of the Texas shale patch, was dabbling with carbon capture and sequestration.

Now those commitments are in question.

Confronted with collapsing oil demand and plummeting prices, the causality of a price war between Saudi Arabia and Russia, oil companies are slashing budgets to weather the growing global crisis.

It remains to be seen where that leaves their efforts to green the oil business. Companies with dwindling cash have a choice: Spend their remaining dollars on the traditional fossil fuel business or on their budding low-carbon enterprises.

Many analysts said they expected the industry to continue its evolution, albeit at a slower pace. The factors that led companies to consider a shift in the first place — like increasing pressure from governments to tackle emissions, weak financial returns and the rise of technologies like electric cars — are likely to outlast the virus.

But companies now must plan for a future with depleted balance sheets and the uncertainty prompted by a virus that has led to unprecedented lockdowns in much of the world. Near-term decisions could shape the oil industry’s transformation for years to come.

"My hunch is those companies rely on cash flow from primary business to support new lines of business that they are seeking to develop," said Daniel Raimi, a senior research associate at Resources for the Future. "If their balance sheet is suddenly in a much worse shape than it was a few months ago, I would expect that would decelerate their investment in new lines of business."

Others were more sanguine. When crude prices were high, oil companies were reluctant to settle for lower returns from renewable energy projects. Now the script has flipped.

Wood Mackenzie, a consulting firm, estimates that 85% of new oil and gas projects would fail to make a return of 15% — a standard industry threshold for investment decisions — with crude prices of $35 a barrel. The U.S. benchmark for crude was hovering around $20 yesterday while international prices for Brent were about $22 a barrel.

Suddenly, returns of 5%-10% generated by wind and solar look attractive, the consulting firm wrote in a note to clients.

"In a sustained US$35/bbl oil price environment, the argument that ‘investing in low-return renewable projects would leave value on the table’ no longer holds," Wood Mackenzie wrote.

It added, "Oil and gas companies will have to deal with the same energy transition issues they had before the oil price drop, only now with potentially weakened balance sheets and reduced growth prospects in oil and gas. This could impact their ability to make a transformative [merger or acquisition] to move into renewables."

Indeed, oil faced a reckoning before the coronavirus. Wall Street was up in arms over the poor financial performance of shale drilling operations. And governments around the world were looking for ways to put a lid on carbon emissions.

Even companies that were interested in transitioning away from fossil fuels struggled to see themselves in a carbon-constrained world. Developing and operating wind and solar farms, for instance, requires a different set of business and technical expertise from producing, refining and selling oil.

The pandemic has thrust many of the industry’s issues to the fore. Analysts now expect a wave of shale bankruptcies as companies struggle to maintain debts incurred when crude was trading at more than twice its current price.

A period of oil patch consolidation may bode well for the energy transition, said Michael Webber, an energy professor at the University of Texas, Austin, and a corporate strategist at Engie SA, a French utility.

Independent shale producers have been among the most resistant to exploring new business models. They are the most likely to be acquired in the coming months by larger companies, which are at the forefront of the industry’s carbon shift.

Executives at some majors were signaling resolve to maintain their climate commitments.

"I think what is going on now only reaffirms the need to reinvent our company. And we will," BP CEO Bernard Looney wrote in a blog post on LinkedIn last month.

Yet myriad issues remain for oil companies committed to diversifying into other sectors of the energy market. The economic fallout of the coronavirus remains unclear, making it difficult to project future electricity demand for wind and solar projects. Access to capital for large-scale renewable energy developments could become scarce if credit markets seize up.

At the same time, oil players that have dedicated the most money to transition face a period of belt tightening. Shell said last week it would cut capital expenditures from $25 billion to $20 billion while reducing operational spending by $3 billion to $4 billion. A company spokesman declined to comment on how the cuts would affect its low-carbon ventures.

Total SA said it would cut spending 20%, or by $3 billion, though it still plans to continue its foray into the United Kingdom’s offshore wind industry (Climatewire, March 31).

Repsol reported it was cutting capital expenditures by $1 billion, even as the Spanish oil giant pledged to maintain its goal of achieving net-zero emissions by 2050.

"Companies have set out [long-term goals] around clean energy. They still remain committed to those goals. But the priority for the next couple years is going to demonstrate profitability and pay dividends, first and foremost," said Jason Bordoff, a former Obama administration official who leads the Center on Global Energy Policy at Columbia University.

One company to watch will be Occidental Petroleum. The Houston-based producer has made forays into carbon capture and sequestration in recent months, with projects to trap emissions at a power plant, a cement factory and an ethanol plant.

The company is also considering plans for a plant that could suck carbon dioxide from the atmosphere. Occidental executives said they hoped to use their experience injecting CO2 into oil fields to transform the company into a carbon management business (Climatewire Feb. 7).

But Occidental is under serious financial strain.

It spent $38 billion last year to acquire rival Anadarko Petroleum Corp., taking on $10 billion in debt from Warren Buffett to complete the deal. Last week, the company said it planned to nearly halve its spending this year, from around $5.4 billion to $2.9 billion.

It’s unclear if Oxy Low Carbon Ventures LLC, the subsidiary overseeing its carbon capture projects, was included in those cuts.

"We remain focused on creating long term value through Oxy Low Carbon Ventures and will be responsible with capital through the changing market conditions," the company said in a statement. "Strong engineering and technical work is where much of our near-term work is focused to ensure capital and operating efficiency for strategic investments going forward."

Bill Arnold, a former Shell executive who teaches energy management at Rice University, reckons Occidental and many of its peers face a fight for survival.

Occidental’s focus now will be on managing its remaining capital. But the oil crash is not without its silver linings, Arnold noted. As drilling slows, industry executives will have more time for strategic planning.

"Companies were struggling before we heard the term coronavirus," he said. "This makes it unavoidable."