Oil giant met with greens for years on climate policy 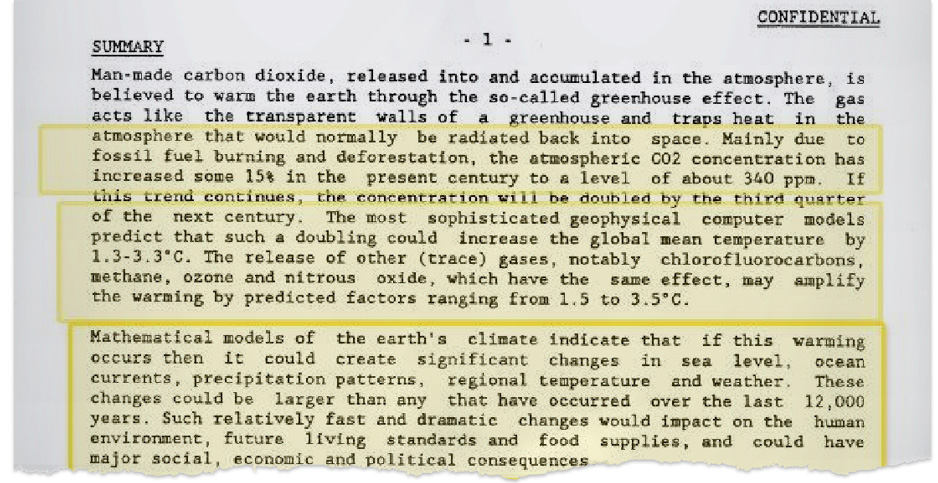 Shell Oil Co. began studying climate change in the 1980s, as seen in this document. The company has been meeting with environmental groups over the past two years to discuss climate policy. De Correspondent

Shell Oil Co. has convened regular meetings since early 2016 with key environmental groups and think tanks to build support for a nationwide carbon tax, according to sources.

The company initiated meetings during the heart of the presidential race, in part because it was believed that greenhouse gas regulations would be strengthened if Democrat Hillary Clinton won the election. The meetings continued after President Trump’s victory, and company officials have hosted talks in Shell’s offices in Washington, D.C.; at restaurants; on conference calls; and over email.

"We value our partnerships with the private sector, including companies like Shell, and believe that these partnerships are important for achieving durable policy solutions," Jason Albritton, a senior policy adviser at the Nature Conservancy, said in an email.

The meetings occurred regularly for about two years, until this summer, when most of the communication shifted to phone and email, according to sources. The contact between Shell and environmental groups continues on a weekly basis, but attendance by specific groups can vary.

Shell has long said it would support a national carbon tax if Congress worked to adopt one. Lobbyists for the oil giant lobbied Senate and House members for a carbon tax this year.

Shell described that lobbying effort as "discussions in support of a robust, transparent federal carbon price" in forms filed with the Senate (Climatewire, Aug. 24).

The meetings, previously unreported, were led by Marnie Funk, a senior government relations adviser at Shell. She declined to be interviewed.

Some conservative advocacy groups and energy firms have signaled that they would prefer an economywide carbon tax in exchange for environmental rollbacks. Other proposals would relieve oil and gas companies of legal liabilities related to climate change, in exchange for a carbon tax.

"EDF regularly meets with companies and other [nongovernmental organizations] to talk about ways to build momentum for climate action in Congress," said Victoria Mills, an EDF spokeswoman. "We’ve met with Shell and other companies in that context."

Joseph Majkut, director of climate policy at the Niskanen Center, said the conversations were "high-level" and infrequent. They did not focus on specific measures, he said.

Adele Morris, a Brookings Institution senior fellow and policy director, said she has attended forums with many participants in recent years about carbon pricing. "A lot of times, the discussion is sort of technical: What would be the pros and cons of different approaches?" she said.

Researchers at Shell grasped the severity of climate change as early as the 1980s, and in a 1988 confidential report, the company said that burning fossil fuels was the primary driver of rising carbon dioxide levels.

"The main cause of increasing CO2 concentrations is considered to be fossil fuel burning," said the report, which was obtained by De Correspondent, a Dutch news organization, in April (Climatewire, April 5).

Tom Pyle, who led Trump’s transition team for the Department of Energy and is now president of the American Energy Alliance, said he hadn’t heard of the carbon tax meetings.

"I have not been invited to that party," said Pyle, a vocal opponent of carbon taxes, "which makes sense, given where I am on that issue."