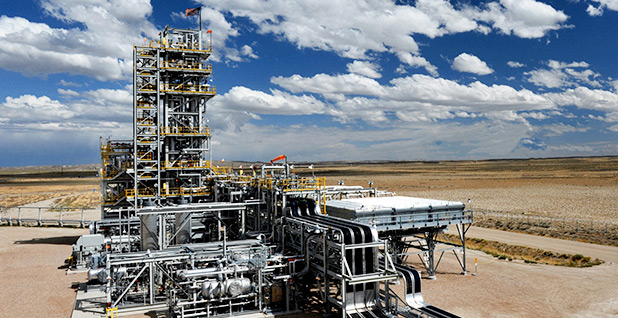 Ten of the world’s biggest oil companies formed a voluntary group called the Oil and Gas Climate Initiative in September 2014. The strategy was to apply the industry’s vast compendium of knowledge to reduce man-made greenhouse gas emissions. It also offered cash — up to $1 billion in investments.

But there was a gap in its early membership ranks.

Texas-based Exxon Mobil Corp., one of the world’s largest publicly traded energy companies, had received an invitation but refused to join. Other U.S. majors also stayed away.

They had some history to wrestle with first. In 1992, Exxon, traditionally one of the nation’s most conservative majors, helped organize a very different group, the Global Climate Coalition (GCC). It challenged the science behind climate change and opposed action to reduce emissions. The group was run by a Washington, D.C., public relations firm and, at the beginning, nearly all of the world’s major oil companies were aligned in it with Exxon.

But as time wore on, and as the advance of climate change became more obvious to investors, GCC’s membership dwindled. It began to disband in 2001. Ten years ago, Exxon proposed a tax on carbon emissions, but it took until this September for it to join the Oil and Gas Climate Initiative. Two other American majors came with it — Chevron Corp. and Occidental Petroleum Corp.

"The initiative [OGCI] was brand new at the time it was announced," said William Holbrook, a spokesman for Exxon, "and we just felt that we needed more detail on its objectives and the means for achieving those objectives."

Upon joining OGCI, Exxon’s chairman, Darren Woods, issued a statement that foresaw no immediate diminution of oil or gas production. "Our mission is to supply energy for modern life and improve living standards around the world while minimizing impacts on the environment," he said. "This dual challenge is one of the most important issues facing society and our company."

Exxon brought a portfolio of what it calls "practical solutions" to address the rise in man-made CO2 and methane emissions. Many of them are tied to technologies that Exxon uses now.

Exxon is substantially involved in capturing CO2, purifying it and using it for enhanced oil recovery, or EOR. It’s a time-honored way to produce more oil by pumping pressurized CO2 into aging oil and gas reservoirs to push more fuel out of the ground.

In an interview, Vijay Swarup, Exxon’s vice president for research and development, explained how these practices might be shifted to produce lower-carbon energy. For example, EOR could be used to reduce emissions by permanently storing CO2 safely underground, or by collecting it and later reusing it in a product. One research aim, he noted, is to reduce CO2 emissions by manufacturing plastics with less energy.

"We’ve got a long way to go," Swarup admitted.

It will have to. According to the U.S. Energy Information Administration, U.S. airlines used 613 million barrels of jet fuel in 2017.

While research and development may take time, collectively the world’s oil and gas industries have essential tools needed to develop and deliver more low-carbon energy, Swarup asserted. "This is as technical an industry as there is out there," he said. "It’s probably the only industry that requires every discipline of science and engineering to be integrated together to get to the global scale of solutions that are needed.

Exxon’s involvement in the initiative overlaps at least two investigations into the firm’s handling of climate-related risks. The attorneys general of Massachusetts and New York have accused the company of deceiving investors by playing up Exxon’s readiness for the effects of warming and tighter regulations (Greenwire, Jan. 7).

One of the quickest ways that Exxon foresees to reduce U.S. carbon emissions is to shift more of the nation’s electricity generation from coal to natural gas, of which Exxon produces a great abundance.

"The shift toward natural gas will carry tremendous benefits for consumers and the environment. Natural gas is affordable, reliable, efficient and available. It is also the least carbon-intensive of the major energy sources, emitting up to 60 percent less CO2 emissions than coal when used for electricity generation," the company notes.

The two other U.S. majors that joined OGCI with Exxon — Chevron and Occidental Petroleum — are also placing bets on producing more natural gas and eventually burying more CO2 in the gas-depleted formations underground. Chevron is currently working on developing one of the world’s largest offshore gas fields in Australia, called the Gorgon Project.

In a report from Occidental in March, Vicki Hollub, its president and CEO, noted that her company is the world leader in enhanced oil recovery. "This should provide additional opportunities for Occidental in a lower-carbon future," she said recently.

OGCI selected Occidental as one of six majors to work on a first-of-its-kind research project in Teesside, an industrial area in northeast England. There, carbon capture and storage will be developed and used to bury a variety of CO2 wastes underground. The heart of the experiment is a new natural gas plant that is expected to collect CO2 from its own emissions.

Some scholars who have watched major oil and gas companies over the years wonder about their current timetables and the extent of their ambitions.

"I wouldn’t say it’s all for show," said David Levy, a professor of management at the University of Massachusetts, Boston. "They’re putting money into low carbon technology. It’s not very much money, say $100 million. Compared to what they spend on oil and gas exploration it’s very small potatoes."

On the other hand, 13 of the world’s oil majors are now pointed in a direction to make a reduction in greenhouse gases, which has never happened before. According to the Environmental Defense Fund, the New York-based environmental group that has waged a multiyear campaign to measure and reduce the oil and gas industry’s methane emissions, the result may not be small potatoes.

The group estimates that roughly a quarter of planetary warming is driven by methane emissions, and somewhere between a quarter and a third of those are man-made emissions from the oil and gas industry. (Methane is the primary ingredient of natural gas.)

OGCI members account for 30 percent of the globe’s oil and gas production, and they have agreed to cut their methane emissions by 20 percent by 2025. That would eliminate 350,000 metric tons of methane a year compared with 2017 levels. Their ambition is to work toward near zero.

Part of the challenge is whether others will follow their leadership. "They’re taking positive steps, but without government regulations to make sure the rest of the market comes along, the bottom drops out," warns Ben Ratner, a senior director of EDF’s business, energy and innovation team.

Ben van Beurden, the CEO of Royal Dutch Shell PLC, seems to agree that the majors can’t do it alone.

"These ambitions demand huge changes from everyone. From governments, individuals and companies," he said.