Oil giants to tell judge everyone adds to warming 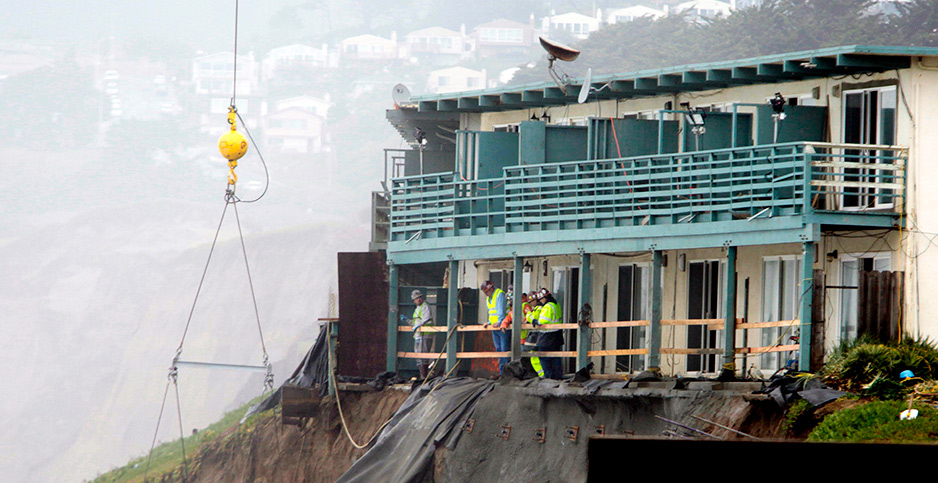 Workers conducting repairs on an apartment complex on a crumbling cliff after a series of storms in Pacifica, Calif., in San Mateo County. Marcio Jose Sanchez/Associated Press

Lawsuits that blame oil companies for damaging cities in California by sharpening climate change should be tossed out to avoid a cascade of similar cases, according to legal arguments being made by an oil company today.

Lawyers for Chevron Corp. plan to make that assertion at a hearing that could determine whether the cases filed by the cities of San Francisco and Oakland go forward. Judge William Alsup in the U.S. District Court for the Northern District of California in San Francisco will decide whether to dismiss the lawsuits against the world’s five biggest oil companies: Chevron, BP PLC, ConocoPhillips, Exxon Mobil Corp. and Royal Dutch Shell PLC.

The cities argue that the oil giants make products that create a public nuisance by triggering sea-level rise and other impacts when they’re burned in cars. They claim the companies knew about the damaging effects of climate change decades ago but hid it to protect their profits.

Josh Lipshutz, a lawyer for the companies, told reporters yesterday that the cities’ claims could spark runaway court cases and heap massive amounts of liability on anyone who releases greenhouse gases.

"Plaintiffs’ claims, if accepted, would create an unprecedented global warming tort that could be asserted against any company, government or individual whose activity has contributed to global warming — essentially anyone on Earth," Lipshutz said. "That is contrary to federal and state law, as well as common sense."

Chevron also plans to argue that EPA, not the courts, has jurisdiction over greenhouse gases. Its lawyers will point to precedent-setting cases that give the agency that authority through the Clean Air Act.

Other oil companies sued by the cities have also filed court documents arguing that the cases lack jurisdiction, because the companies are not based in California. The cities contend that those companies have Golden State operations and are liable.

The lawsuits by San Francisco and Oakland are the first to go forward among a growing group of climate cases. Also in California, Imperial Beach, San Mateo, Marin County, Richmond, Santa Cruz and Santa Cruz County are suing two dozen or more fossil fuel companies and trade associations in separate cases. A decision in the 9th U.S. Circuit Court of Appeals is pending on whether to uphold an order by federal Judge Vince Chhabria that moved those suits from federal to state court.

The city of Boulder and the counties of San Miguel and Boulder in Colorado are suing Suncor Energy Inc. and Exxon Mobil, demanding "past and future damages" for climate impacts. King County, Wash., sued the same five companies named in the San Francisco and Oakland suits (Greenwire, May 10).

Today’s hearing follows an April "climate tutorial" overseen by Alsup, the federal judge presiding over the San Francisco and Oakland cases. No decision came out of that event, and it’s unclear when Alsup is expected to rule on whether the cities’ cases will proceed.

If he rejects the motions to dismiss today, that would allow the cities to start the process of discovery, looking for documents to support their claims that the oil giants knew about climate risks decades ago and then conspired to create doubt about climate science.

The oil companies likely would appeal, and the case could get pushed up to the 9th U.S. Circuit Court of Appeals. It’s not clear whether discovery could proceed while that court decided whether to intervene, said Ann Carlson, faculty director of the UCLA Emmett Institute on Climate Change and the Environment.

Oil companies "are going to use every tool they can to try to get these cases dismissed," she said.

If discovery is allowed, "that is a big deal," Carlson said. City attorneys likely will seek documents and legal questioning of "everybody from the CEO down to internal scientists, marketers, people engaged in the campaigns to try to dissuade people about the reality of climate change."

She compared it to past cases against tobacco companies.

"One of the big important things that happened in the tobacco litigation is we started to uncover information about defendant concealment," Carlson said. "That could be very, very damaging to the fossil fuel companies." If the cities prevail on the motions to dismiss, "that’s where we’re headed."

If Alsup dismisses the cases, the cities would likely appeal.

Do past precedents apply?

There’s a difference of opinion about whether Alsup thinks the AEP case acts like a barrier to the cities’ suits. Carlson and other legal experts have said the judge seemed to indicate so in his ruling to keep the cases in federal court. The cities had unsuccessfully sought to have them returned to state court where they were originally filed.

"All the judge was deciding at that time was whether there was federal jurisdiction, federal common law in this area," Lipshutz said. "He didn’t say there are viable federal claims here. … That’s a question he has not yet decided, and that’s what we’re asking him to decide here."

He added that "if the claims weren’t viable in AEP, they’re even less viable here."

Chevron also cites the Native Village of Kivalina v. Exxon Mobil Corp., in which the governing body of an Iñupiat Eskimo village sued 24 oil and utility companies. The nuisance claim charged that excessive greenhouse gas pollution caused global warming, which triggered loss of Arctic sea ice on the Kivalina coast, forcing the relocation of residents. The 9th Circuit in its 2012 decision ruled that the climate-change-based nuisance claims were displaced by the Clean Air Act. The Supreme Court declined to take up the case.

Peter Frumhoff, director of science and policy at the Union of Concerned Scientists, said that climate science has advanced since the AEP and Kivalina cases. That’s important when assessing liability, he said.

It’s now possible to attribute greenhouse gas emission impacts directly to each company’s products, he said. Frumhoff said that 15 percent of sea-level rise can be attributed to the 20 largest fossil fuel producers and that 6 percent can be linked to Exxon Mobil, BP and Chevron, defendants in these cases.

The oil companies "make the claim that there’s no realistic possibility of tracing any alleged effect of global warning to any particular action, any particular group," he said. "That’s in fact not true."

The Trump administration and 15 states are supporting the oil companies, arguing the suit would interfere with state and federal policies on climate change (Climatewire, May 14; Climatewire, April 20). It also claimed that a potentially infinite number of entities could be found liable.

"The U.S. government’s brief really explains, just as we do, that these claims raise significant constitutional concerns," Lipshutz said. "The position of the U.S. government has remained unchanged from the Obama administration to the Trump administration, and I believe it’s a powerful brief that supports our arguments."

"A court could be pretty skeptical that it should say the plaintiffs can’t go forward, given that the federal government seems to be rolling back its efforts to regulate emissions," Carlson said. "I’m not sure it’s a huge benefit to the defendants to have the Department of Justice in there given the political and policy positions that the Trump administration has taken on climate change."

Lipshutz argued that the states’ amicus briefs on both sides of the argument support the need to defer to the federal government. California, Washington and New Jersey support the cities’ claims (Climatewire, May 8).