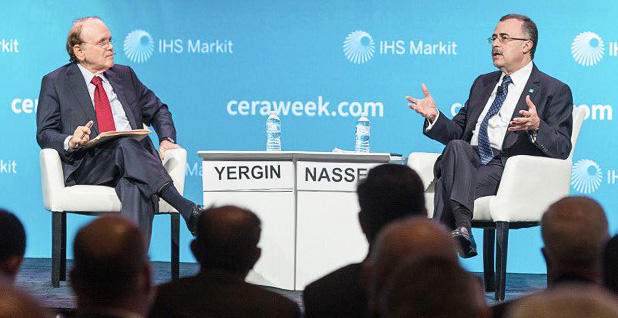 HOUSTON — The oil business has a message for electric vehicles and their backers: Not so fast.

"Many wrongly believe that it is a simple matter of electric vehicles quickly and smoothly replacing the internal combustion engine," Nasser said. "Also, it is not an either-or future but far more complex."

The CEO provided a spark during the second day of this year’s CERAWeek by IHS Markit conference, which attracts energy names from around the world. He sought to address worries hovering over oil, including whether electricity and other fuels will disrupt the long-running dominance of refined oil products in transportation. Other industry executives here have echoed Nasser’s bullishness on the need for oil for many years.

Bob Dudley, CEO of BP PLC, conceded that electric vehicles have a role to play in lowering global emissions of greenhouse gases. But he dismissed talk of electric cars inevitably making crude oil use obsolete. There’s not a single solution for lower emissions, he said.

"I’m not trying to discredit EVs at all," he said. "The important point here is that EVs are not the silver bullet that everybody is looking for."

Dudley also alluded to a presentation delivered last week by Spencer Dale, a BP economist, at Rice University. Dale said his team modeled one extreme scenario whereby all new passenger vehicles had to be fully electric from 2040 onward, meaning global governments were moving toward a total ban on the internal combustion engine. Even in this case, Dale calculates that global oil demand will still be higher 20 years from now than it is today, and that the impact on emissions reductions will be minimal.

The pace of any subsequent decline in oil demand is likely to be slow, according to Dudley.

While there’s a general acknowledgement here that global oil demand growth may slow, oil executives still see a rise and even dispute the idea that demand is poised to peak and then fall. Some see at most a plateauing of crude demand. Others warn that demand could rise further out to 2040, driven less by use in passenger vehicles and more by production of plastics, petrochemicals and other non-combustible paths for processing and selling hydrocarbons.

Referencing BP’s global energy outlook, Dudley said it’s likely that oil and gas will continue to constitute at least half the world’s supply of energy by 2040. He repeated Dale’s assertion that any serious effort to lower greenhouse gas emissions must first focus on the power sector. Proponents of this view continue to reference recent trends in the United States, where rising use of natural gas for power generation at the expense of coal and oil has helped carbon dioxide emissions to fall.

Dudley sees a role for wind and solar but said a race to renewables won’t solve the challenge. He wants an agnostic approach to fuels.

At the same time, at least one oil producer has used electric vehicles to cut its operating costs. Suncor Energy Inc., which produces crude from massive mines in the Canadian oil sands, recently started using 400-ton autonomous electric trucks to carry ore to the surface, according to Suncor Chief Operating Officer Mark Little. The company has nine now and plans to scale up to 150 vehicles.

Earlier this week, the International Energy Agency (IEA) slightly reversed an earlier warning of a forthcoming spike in oil prices as global oil demand recovers. Starkly lower upstream investment in new oil production globally caused the agency to worry that demand growth and natural field declines would catch up to crimp crude supplies. IEA now sees rising oil output from the United States, Brazil, Canada and Norway more than making up for this gap, at least for the next five years or so (Energywire, March 6).

The U.S. Energy Information Administration also has confirmed its view that 2018 will see this country hit record annual oil output. That record would most likely be broken in 2019, EIA said.

The seemingly relentless rise has some executives growing nervous about the possibility of another drop in oil prices.

Ryan Lance, CEO of ConocoPhillips, urged his colleagues to be cautious about the oil supply-demand outlook. "It feels balanced today, but it feels tentatively balanced," Lance said.

Mark Papa, the former chief executive of EOG Resources Inc., said U.S. oil production may not be able to grow fast enough to meet the expected rise in global demand. The country’s oil output is increasingly focused on shale fields, and companies have exhausted the best drilling spots in two of the major formations, the Eagle Ford and Bakken shales.

There’s still plenty of room to ramp up drilling in the Permian Basin, Papa said, but the basin alone isn’t enough to sustain some of the rosy predictions for American oil output. Meanwhile, companies haven’t invested in long-lived projects like offshore oil fields.

"If shale does disappoint over the next three or four years, there’s not a lot of safety valves," he said.

Nasser, whose company may hold an initial public offering this year or next year, said yesterday that there are plenty of uses for oil besides transportation. Saudi Aramco is researching better technology to convert crude oil into petrochemicals and even looking for beneficial uses for carbon dioxide.

Carbon capture, utilization and storage also garnered its own panel at CERAWeek yesterday, and speakers offered hope that such technology will continue to grow.

More broadly, Nasser remains confident that oil market fundamentals are healthy and that a broad-based recovery in the global economy is on track.

"I’m not losing any sleep over peak oil demand or stranded resources," he said. "Oil and gas will continue to play a major role."

Electric vehicles will not deliver rapid and economical reductions in carbon emissions until the electric fuel mix is sufficiently clean, Nasser said. He also sees coal remaining a big part of the energy mix for years to come, especially in places such as China and India.

"Right now, with electric vehicles, we are simply moving emissions from tailpipe to smokestack," Nasser said.

As for vehicles, he said multiple technologies are in a race for the future, with options such as an advanced internal combustion engine, hybrids, plug-in vehicles, electric vehicles and hydrogen fuel-cell vehicles. Most vehicles on the road today have an internal combustion engine. There may be potential as well as challenges such as cost, durability and public acceptance, he said.

Patrick Pouyanné, CEO of Total SA, told the CERAWeek gathering on Monday that he got an electric car to test. He called it silent and expensive, saying that renting a battery doesn’t save money compared with gasoline. He’s convinced big cities will see plenty of electric cars in 10 or 15 years because of air quality. But he still described a "longer story for oil in front of us," noting uses such as airplanes and shipping.

Discussions of electric vehicles are expected to continue at CERAWeek. CEO Mary Barra of General Motors Co. is among the speakers scheduled for today, and tomorrow’s focus is on the electric sector.

To Nasser, electric vehicles will grow and have a role to play in global mobility. But he said their impact on a portion of oil demand shouldn’t be exaggerated.

"We must push back on the idea that the world can do without proven and reliable sources," he said.