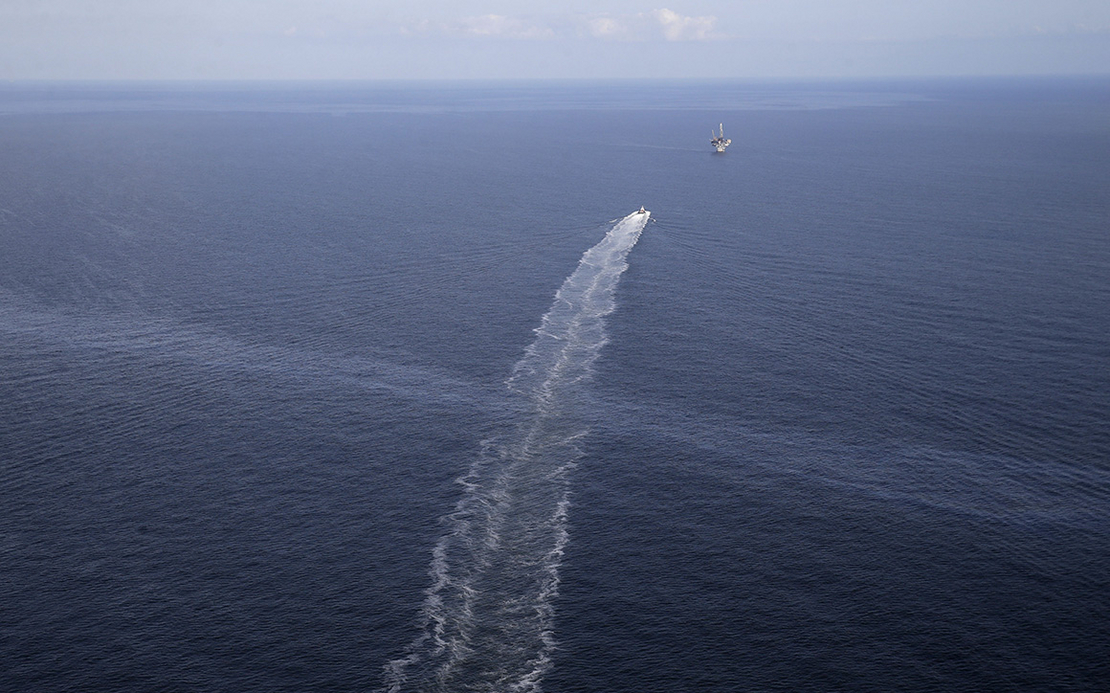 The wake of a supply vessel heading toward a working platform crosses over an oil sheen drifting from the site of the former Taylor Energy oil rig in the Gulf of Mexico off the coast of Louisiana in 2015. Gerald Herbert/AP Photo

A new report from the oil and gas industry warns of severe production declines in the Gulf of Mexico — and a billion-dollar bleed in federal revenues — if the Biden administration continues to delay offshore oil and gas leasing.

Commissioned by the American Petroleum Institute and National Ocean Industries Association (NOIA), the study also flags the upcoming sunset of the Interior Department’s five-year leasing program, a document required under the Outer Continental Shelf Act that lays out a schedule for offshore oil and gas lease auctions.

The Biden administration has not yet revealed steps for releasing a new plan, raising questions about the near- and long-term outlook for oil and gas development on the outer continental shelf.

“It’s fairly clear that there’s not going to be a leasing program in place come July 1,” said Erik Milito, president of NOIA. “The longer you go without a five-year program, the more significant the impacts are going to be on our economy, for Americans, for jobs, for energy affordability.”

Not holding lease sales over the next five years would cut an average of $1.5 billion per year in revenue to the U.S. government, said the report prepared by Energy & Industrial Advisory Partners, which modeled the impacts of no new leasing until 2028.

That loss would then jeopardize funds for programs supported by offshore oil dollars, like the Land and Water Conservation Fund that pays for maintenance and repairs on public lands, as well as eliminating millions of dollars for local governments and historic preservation budgets, the report notes.

By 2036, a five-year pause in leasing would result in a 33 percent drop in oil and gas production in the Gulf of Mexico, where projects are lined up like a “conveyor belt” over multiple years from the leasing phase to exploration to eventual production.

Interior spokesperson Melissa Schwartz did not provide a timeline for the release of a new offshore leasing program when asked today but noted in a statement that the oil industry already holds significant leases.

“The Interior Department is actively developing its five-year plan for the offshore program,” she said in an email. “In the meantime, of the more than 11 million acres of offshore federal waters already under lease, more than three-quarters (75.58% or 8.29 million acres) are unused and non-producing.”

When President Biden first took office last year, the administration instituted a controversial moratorium on new leasing in order to conduct a report examining the shortcomings of the federal oil program. That temporary ban was later overturned by a federal judge.

In a twist, the White House’s first and only lease auction for federal minerals, held in the Gulf of Mexico last year, was also overturned by a separate federal judge for failing to account for the climate impacts of selling oil and gas leases.

Industry supporters, including the American Petroleum Institute, have brought their own lawsuits against the administration to try and force the regular sale of oil and gas drilling rights. More litigation is expected if a new oil and gas leasing plan isn’t in place this summer.

For its part, the administration has said it continues to carry out the federal oil and gas programs, both onshore and offshore, in accordance with federal law.

Earlier this year, the administration blamed a delay in holding sales on a federal court decision that blocked the administration from using a contested social cost of carbon in weighing drilling impacts. But a federal appeals court has since allowed Interior to continue using that metric to measure greenhouse gases associated with drilling, which Schwartz earlier this month said would allow the agency to continue planning for oil and gas leasing.