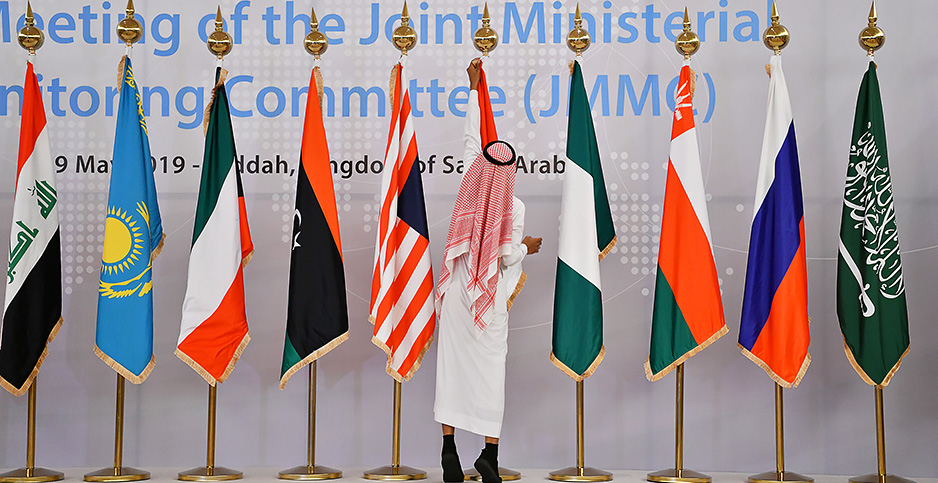 An employee adjusted the Mexican flag at the meeting room before the OPEC 14th Meeting of the Joint Ministerial Monitoring Committee in Jeddah, Saudi Arabia, in this May 19, 2019, file photo. Waleed Ali/Reuters/Newscom

The world’s largest oil producers yesterday reached a historic truce to trim production as the novel coronavirus hammers demand for oil across the globe, causing prices to plummet.

Despite its unprecedented nature, oil analysts say the deal among OPEC and its allies may not be enough to prevent widespread damage across the U.S. energy industry as bankruptcies mount.

The agreement calls for Russia and members of OPEC to cut oil production by a record 9.7 million barrels a day, beginning in May. Other reductions will come from oil-producing countries negotiating through the Group of 20 industrialized nations — many of which, including the United States, have already seen their output drop due to market forces.

President Trump, who helped secure the deal with a call last week to a reluctant Mexico, hailed the deal with a tweet yesterday afternoon and said he thanked Russian President Vladimir Putin and Saudi monarch King Salman for the "big Oil Deal" in a telephone call from the Oval Office.

"This will save hundreds of thousands of energy jobs in the United States," Trump tweeted. "Great deal for all!"

It wasn’t immediately clear how the deal will be enforced. The governments essentially control oil production in Russia, Saudi Arabia and many Middle Eastern nations, but Western countries like the United States can’t order private companies to stop drilling.

Trump, under pressure to preserve jobs in oil-producing states, agreed Friday that the United States would make up for some of Mexico’s share of the production cuts, although it’s not yet known how the administration plans to oversee such a move.

The American Petroleum Institute, which represents the nation’s largest oil producers and had pushed back against calls for government intervention, called it a "significant agreement that will foster increased stability in energy markets to the benefit of both American energy consumers and producers."

And Sen. Kevin Cramer (R-N.D.), who hails from an oil-rich state and has suggested pulling American troops out of Saudi Arabia in response to the price war, said Trump’s and Energy Secretary Dan Brouillette’s "strong and tireless advocacy on behalf of US oil producers" had sealed the deal.

"Without it, the US could’ve lost its energy dominance along with the security & thousands of good-paying jobs it brings," Cramer said via Twitter.

"Because the United States drives so much of the demand around the world, we’re able to get these parties to the table to address the issue that we all face," Brouillette told reporters on a call last night, adding that Trump’s personal involvement "showed his skill at deal making."

The agreement was a bright spot for Trump, who has faced criticism for not moving more quickly to contain the coronavirus in the United States. Two polls released last week showed most Americans disapproved of Trump’s handling of the pandemic, and nationwide deaths topped 21,000 yesterday, pushing the United States past Italy as the country with the highest number of coronavirus deaths, according to NBC News.

Yet smaller producers predicted a wave of bankruptcies as supply is likely to continue to outpace demand. Many U.S. oil companies last month had already begun to trim spending and lay off workers in response to the price crash (Energywire, March 25).

"There’s still going to be wave after wave of oil and gas bankruptcies," said Dan Eberhart, CEO of Colorado-based Canary LLC, one of the largest private oil field service companies in the nation. Eberhart noted that the world is now consuming 25 million barrels a day less than the amount now being produced.

Oil prices began rising in overseas trading yesterday evening, with U.S. crude and Brent oil rising more than $1 per barrel at 9 p.m. Eastern time. Both grades are less than half their price at the beginning of the year.

Analysts at the data firm Rystad Energy said the deal would boost the market in the short term, because it’ll help prevent the current rush of oil production from filling the world’s oil storage facilities. Rystad analysts said prices will still fall, though, because the cuts aren’t big enough to offset the drop in oil consumption that the virus has created.

"The group has unfortunately only come up with half of the ransom money," Bjørnar Tonhaugen, head of oil markets at Rystad, said in a research note. "We believe the market’s disappointment will reflect in prices already from April due the lack of size and the speed of the supply removal."

The actual production cuts may be closer to 8 million barrels a day when compared with the record-setting output from March, according to a note from ClearView Energy Partners. The firm was skeptical of some claims associated with the deal, such as pledges from some Middle Eastern countries to "over-comply" with their expected reductions and Trump’s promise that the United States would help make up for some of the cuts that the group of nations had expected from Mexico.

"Taking such reports at face value, they may not materially change market expectations," the ClearView analysts wrote.

The deal capped a week of bargaining aimed at ending the feud between Saudi Arabia — the de facto OPEC leader — and Russia. The countries have propped up prices since 2016 by holding back their production, but talks on expanding those cuts to deal with the virus outbreak broke down in early March and both countries flooded the world market with oil (Greenwire, March 9).

On Thursday, OPEC and Russia tentatively agreed to cut production by 10 million barrels a day, with the expectation that other oil-producing nations would also contribute. Talks dragged into the weekend after Mexico reportedly refused to accept its share of the cuts.

Oil markets were "kind of underwhelmed" when the size of the production cuts was first disclosed last week because demand has dropped so low, said Samantha Gross, a fellow with the Cross-Brookings Initiative on Energy and Climate. She suggested prices need to drop even lower to balance the market "and bring production down to the level of demand."

And she said they will drop even further as storage capacity begins to vanish. "I don’t think we’ve seen the bottom of oil prices," Gross said.

Analysts suggested there is little the Trump administration can do to reverse the downward spiral. Before the deal was reached, Trump had not ruled out imposing tariffs on imported oil, and members of Congress had suggested threatening Saudi Arabia by withholding military aid.

"There is this idea that if the Trump administration pushes the Russians and Saudis hard enough, they can somehow bring oil prices up, but I think what that point of view misses is the idea that oil prices are going to stay low and there’s nothing the administration can do to bring oil prices up to acceptable levels for U.S. producers because of the level of demand destruction," Gross said, adding, "There may be a lack of understanding how little power they have in this market."

Mexico had initially blocked the landmark deal, but Trump said Friday that the United States would "help Mexico along." He said Mexico offered to cut production by 100,000 barrels, but OPEC wanted more.

He said Mexico would reimburse the United States "sometime at a later date when they’re prepared to do so."

The Trump administration has been under pressure from oil producers and members of Congress from hard-hit oil-producing states. Trump said Friday that he didn’t want to hurt what he called an "incredible" industry.

"We don’t want anything to hurt those jobs, those great jobs in Texas and North Dakota, in Oklahoma, and everywhere," Trump said. "New Mexico, tremendous energy business. And we want to keep those jobs."

Trump had initially hailed the low prices as good for consumers and the airline industry, but in recent weeks he has seemed to see a need for higher prices, noting that gasoline prices in the United States haven’t been below $1 per gallon since the 1950s.

And Trump, who has boasted that his administration has achieved "energy dominance," said the United States wants to remain independent. Even as he talked about oil production being cut, Trump said that the United States was "probably No. 1" and that his administration has moved to open up the coastal plain of the Arctic National Wildlife Refuge to oil and gas exploration.

The negotiations forced Trump to deal with OPEC, which he’s long loathed.

"I’ve hated OPEC over the years, absolutely hated them," Trump said Friday. But with "potentially … years’ worth of supply" on the line, he said he had little choice.

In his 2011 book, "Time to Get Tough," Trump criticized the cartel for unfairly fixing oil prices and urged Congress to pass legislation that would authorize the U.S. attorney general to file lawsuits against foreign countries deemed to be working together to affect the price of oil.

Oil is Saudi Arabia’s primary source of income, and Trump said Friday that nearly every country supported pulling back production "because they’re getting clobbered."

Russia is now agreeing to more production limits that it had rejected just a month ago. That’s because it’s pumping too much oil and doesn’t "have anywhere to put it," said Suzanne Maloney, interim vice president and director of the foreign policy program at the Brookings Institution.

Maloney said the coronavirus has put the Russian economy into a "free fall," pressuring a more robust response from Putin.

"It’s really in his interest to grapple better with the economic situation," she said.

She also said Russia needs to maintain a good relationship with Saudi Arabia to further its ambitions in the Middle East.

"The Saudis are buying arms, they’ve pledged to invest large sums of money in the Russian economy, so there are other factors there beyond oil that I think influenced the Russian decision," she said.