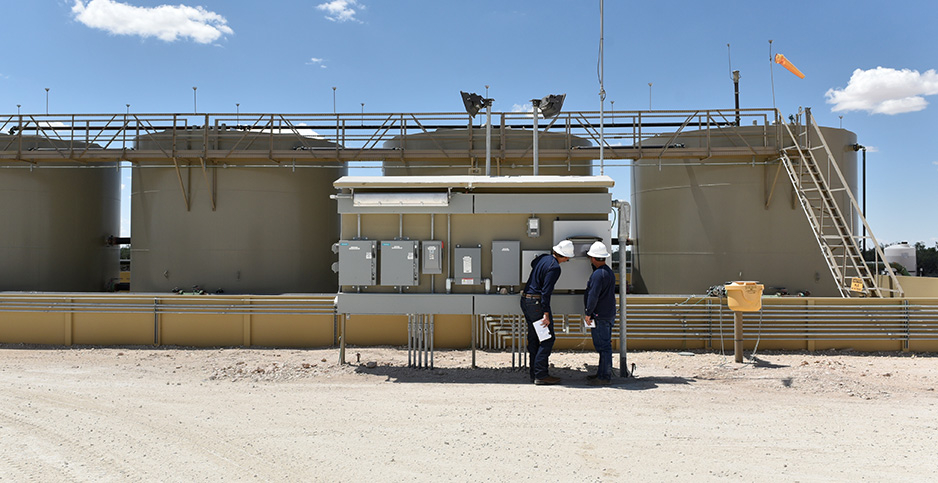 OKLAHOMA CITY — Regulators in three major oil-producing states are looking for new ways to handle the huge flow of wastewater produced by the drilling industry, a move that could have long-term implications for the environment and the water supply in the oil patch.

Texas, New Mexico and Oklahoma are all seeking permission from EPA to issue what are known as National Pollution Discharge Elimination System (NPDES) permits under the Clean Water Act. Their aim is to one day allow oil companies to divert their oil field wastewater to some kind of beneficial use, which could be irrigating crops, watering livestock, municipal use, or even discharging it into rivers and streams.

It’s a long-term process, and it won’t be cheap. Environmentalists and some residents in the oil-producing states are concerned that the idea is untested and could lead to contaminated crops or rivers.

But advocates, including oil and gas regulators in all three states, say it could help solve one of the industry’s crucial logistical problems — where to dispose of the huge amounts of contaminated water that are a byproduct of oil and gas production.

In Oklahoma, regulators view it as a 10-year project.

"If we wait 10 years to try to find a solution, we’re still going to be looking at a 10-year problem," Shellie Chard, water quality division director at the Oklahoma Department of Environmental Quality, said last week at an industry conference, quoting a maxim frequently used by the state’s outgoing energy and environment secretary, Mike Teague.

For decades, companies have disposed of the waste, usually known as saltwater or produced water, by injecting it deep underground. But that’s becoming more difficult, according to Chard and others who spoke at the Cost-Effective Water Management Congress here in Oklahoma City.

In Oklahoma, regulators have forced the industry to cut back on injection after the practice was linked to a string of earthquakes (Energywire, April 10).

And in Texas and New Mexico, researchers are warning that some of the underground reservoirs used to store produced water are showing signs of diminished capacity. Laura Capper, an industry consultant, said underground pressures are gradually rising in at least four counties on the Texas side of the Permian Basin.

"We’ve been injecting in some of these formations for a very long time, and they cannot support the same injection rates that they used to," she said.

A lot of companies are trying to reuse produced water in their own operations. There are about 30 treatment operations in Oklahoma, speakers at the conference said. They typically consist of a series of tanks that separate any residual oil from the wastewater, and fabric-lined ponds that allow solids to settle out and other types of treatment.

But the volume of produced water is so big, the industry can’t absorb it all. In the Permian Basin, companies get an average of a little less than 6 barrels of produced water for each barrel of oil, Capper said.

“Unless you live on the North Pole, you’re downstream of somebody and are likely drinking or using reused water.”

The Permian Basin is producing about 2.1 million barrels of oil a day just on the Texas side, which implies about 12 million barrels, or 504 million gallons, of wastewater a day. That’s about five times as much water as the city of Washington, D.C., consumes in a day.

The wastewater can be highly contaminated, with everything from drilling chemicals to heavy metals and radioactive material carried up from the oil and gas formation. It can also contain as much as six times more salt than seawater.

State regulators have reported thousands of spills involving the salty waste over the years, and they’re a particular concern for farmers and ranchers because the salt can do more damage to soil than an oil spill (Energywire, July 21, 2016).

It’s technically feasible to clean up produced water and make it safe to drink, but it’s costly, said Jeri Sullivan Graham, an assistant professor at the University of New Mexico who studied ways to reuse salty water.

It’s more likely that oil companies and regulators will look for some kind of middle ground like an industrial use — using treated wastewater to offset potable water for cooling power plants, for instance.

"That’s the first place we go, is replacing fresh water when we can," she said in a phone interview.

David Burnett, a professor at Texas A&M University who also studies technology for reusing produced water, said there are likely to be limits on how much the waste can be reused.

The cost of treatment has fallen dramatically — as low as 50 cents a barrel in some cases — but that’s still 10 times higher than what most farmers pay for water, Burnett said. And the cost per barrel doesn’t include the expense of piping or trucking the water to an end user.

The idea has critics, too. Written comments on a white paper on the topic in New Mexico were about evenly split between trade groups that approved of the idea and local residents who opposed it.

Treating produced water is a lot trickier than it sounds, said Dan Mueller, director of natural gas exploration and production at the Environmental Defense Fund. Most research has focused on getting the salt out of the fluid, but there can also be dozens of chemicals in the wastewater.

Ethylene glycol, for instance, is the main ingredient in most car antifreeze formulas, and it’s often used in hydraulic fracturing. It can be poisonous if it’s ingested, but EPA doesn’t have a standard to regulate whether traces of the chemical are safe in drinking water, Mueller said.

"Treated produced water is an industrial effluent," he said at the produced water conference. "For the purposes of what you’re doing with that water, clear doesn’t mean it’s clean."

There are already a handful of examples of states allowing alternative uses for produced water, but they’re on a relatively small scale.

Pennsylvania allowed oil and gas companies to send produced water to sewage treatment plants until about 2010, then scaled back the practice because of concerns about the high levels of salt in the wastewater. A few companies in Pennsylvania still have recycling facilities that discharge treated water into rivers (E&E News PM, Oct. 20, 2011).

Colorado allows some produced water disposal from coalbed methane production, but not from fracking sites, a spokeswoman for the state Department of Public Health and Environments said in an email.

EPA’s Region 6, which handles permitting for most oil- and gas-producing states, has issued only about a dozen NPDES permits in the last year, a spokeswoman for the regional office in Dallas said in an email.

In New Mexico, the state Department of Energy, Minerals and Natural Resources has been working on a white paper exploring produced water issues. In Texas, the state Railroad Commission has asked EPA acting Administrator Andrew Wheeler for assistance getting permitting authority for oil and gas wastewater.

In Oklahoma, the Department of Environmental Quality plans to send an application to EPA by the end of the month, asking for permitting authority over oil field-produced water, Chard said. So far, no companies have applied for permission to use produced water outside the oil field, she said.

Once the state has permitting authority, though, the cleaned-up wastewater could be used for a variety of purposes, including agriculture, industrial or municipal use.

Municipal sewage in the United States is often more contaminated than oil field waste, but it’s treated and returned to rivers and lakes under EPA guidelines, where it’s often consumed by the next town or city downstream. Some communities, particularly in drought-stricken Western states, have even experimented with "toilet to tap" systems that route treated water directly from sewer plants into the municipal water system (Climatewire, July 11, 2014).

"Unless you live on the North Pole, you’re downstream of somebody and are likely drinking or using reused water," Chard said.