Oil prices may not drop even as companies drill more 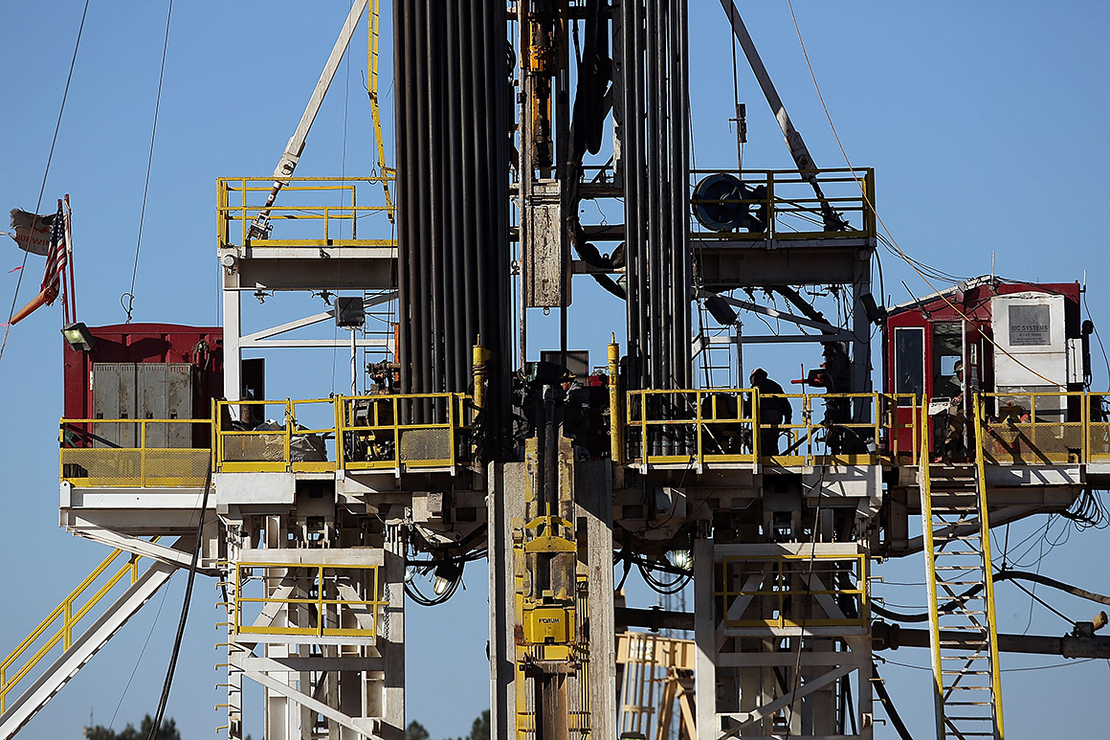 Workers on the platform of a fracking rig in the Permian Basin near Midland, Texas. Spencer Platt/Getty Images

Oil production is set to grow later this year, but it may not fully cure the price spikes caused by the Russian invasion of Ukraine, analysts and company executives said last week.

Customer spending in North America is likely to increase by over 35 percent this year, Halliburton Co. CEO Jeff Miller said, up from the oil field service provider’s previous estimate of more than 25 percent. National oil companies in the Middle East also may increase their activity.

“What’s key is we’re seeing them both at the same time,” Miller said on a conference call with analysts.

Oil and natural gas prices hit their highest levels in more than a decade after Russia invaded Ukraine this year. The U.S. and the European Union promptly imposed economic sanctions on Russian companies, and a series of western oil companies said they were abandoning projects in Russia (Energywire, March 2).

The price for domestic oil was about $120 a barrel before falling. AAA said the cost for regular U.S. gasoline hit a record average — not adjusted for inflation — of $4.33 a gallon on March 11. The average was $4.12 as of yesterday, AAA reported.

High energy prices in turn have been driving inflation, which in the U.S. hit levels not seen since the 1980s. The Biden administration has committed to releasing 1 million barrels a day for six months from the U.S. Strategic Petroleum Reserve, and has coordinated releases from other countries (Energywire, April 4).

The U.S. has added 257 drilling rigs in the past year, for a total of 695, according to Baker Hughes Co. The number of hydraulic fracturing crews has more than tripled to 70 in the last two years, according to the data firm Enverus.

The uptick in drilling and fracking could push U.S. production up by 1 million barrels a day by the end of the year, said Al Salazar, vice president of intelligence at Enverus. But it still may not be enough to make up for the Russian production that’s been taken off the market by economic sanctions, he said.

“The potential hole that has to be filled is pretty big,” Salazar said in an interview. Under those conditions, it’ll be hard for domestic oil prices to fall below $100 a barrel, he said.

Demand for oil has started to fall in response to inflation and the ongoing Covid-19 lockdowns in China, according to the consulting firm Rystad Energy. Global consumption has fallen below the pre-pandemic high set in 2019, and it may not recover until 2023, the company said.

Normally, a reduction in oil demand would push down prices, but “it’s not that simple,” Claudio Galimberti, Rystad’s senior vice president of analysis, said in an email. The drop will help avoid spikes in oil prices, but international grades of crude oil are likely to stay between $80 and $120 a barrel through the end of September, he said.

Halliburton and its peers in the oil field service industry like Baker Hughes and Schlumberger Ltd. have argued the industry has underinvested in new oil and gas production since the price crash of 2014-2015.

The oil field service providers are typically viewed as good predictors of trends in energy production. They provide the equipment and services that the industry relies on, and can see upticks in their orders long before new oil and gas start flowing.

“That mix is what makes us confident in our trajectory of margin expansion and in the potential uniqueness of this up cycle compared to the past,” he said.

“The unfolding situation in Europe has definitely accelerated the pace of discussions on the next wave of LNG projects,” Simonelli said, adding that this may be part of the early stages of a multiyear reorganization of the energy system.