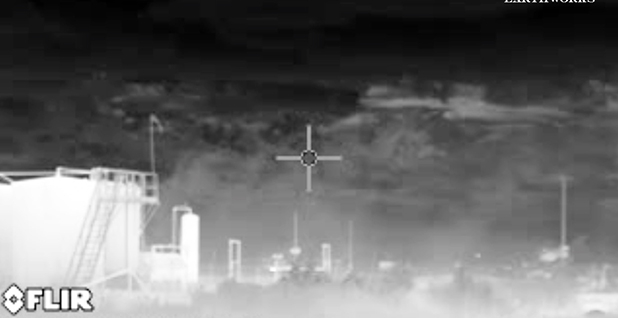 Sharon Wilson watched the young oil worker through an infrared camera as he opened hatches on top of an oil storage tank. Toxic gases billowed out, and he walked along a catwalk in a steady stream of the vapors.

What Wilson knew, and the young man apparently did not, was that those vapors could kill him.

Wilson, a Texas-based environmental activist for the group Earthworks, had come to this West Texas oil well site in April to document pollution for the people living nearby.

The oil worker knew she was watching. And he wasn’t happy. He turned toward Wilson with an exasperated shrug. But as he drove away, she waved him over. He looked about the same age as her youngest son. Wilson told him men had died doing just what he’d been doing. He wasn’t convinced.

"He said, ‘My momma knows what I’m doing, and she is fine with it,’" Wilson recalled in an interview. "That was very disturbing to me. I cried."

It’s one of several instances in which Wilson and others from Earthworks set out to document air pollution from oil and gas production but also found workers laboring in potentially lethal conditions.

OSHA has not responded except to note that the complaint was forwarded to regional offices in Dallas and Denver. A NIOSH spokeswoman said the agency is preparing to respond.

To Wilson, the eight incidents show that workers are still being exposed to the dangerous gases from storage tanks despite years of government warnings and industry programs. And she says it also undercuts assurances from oil companies that their efforts to reduce methane emissions are effective.

"The industry is not at all serious about containing methane," said Wilson, who lives in the Dallas-Forth Worth area. "They don’t care at all about workers."

Earthworks started its Community Empowerment Project several years ago to document air pollution from oil and gas affecting communities. The group obtained a sophisticated infrared camera, got people trained to use it and sent them to communities with intense oil and gas activity. Industry groups have accused them of using grainy, black-and-white videos to get people to fear oil and gas production.

Federal worker safety officials have been warning oil workers and their employers about toxic gases at shale oil production sites since about 2014 (Energywire, May 20, 2014).

All crude oil has compounds called volatile hydrocarbons such as benzene, butane and propane. Crude from shale formations sometimes has more of these compounds than conventional oil. It’s related to why shale crude is more prone to explode in rail cars.

Before they fill up their tankers, truckers have to measure and sample the tanks. To do this, they pop the "thief hatch" atop the tank, potentially exposing them to the toxic gases. Then they drop in their instruments. "Flow testers" stay on-site and perform similar tasks (Energywire, Oct. 27, 2014).

Safety and health officials say the volatile petrochemicals can whoosh out of the tanks with enough force to knock off a worker’s helmet. At high concentrations, the hydrocarbons can push enough oxygen out of the air to asphyxiate a person, even outdoors. The airborne chemicals can also disorient people to the point that they are unable to escape the lethal effect of the vapors.

Worker safety experts say there may be more deaths and injuries among workers who get disoriented and fall or remain disoriented after they drive off-site.

OSHA and others have issued safety alerts warning companies and their workers about the hazard, including one in early 2016 (E&E News PM, Feb. 12, 2016). NIOSH recommends that crude should be measured without workers opening hatches and peering in.

In mid-2016, the American Petroleum Institute announced a new standard intended to reduce the number of workers taking measurements by hand atop tanks (Energywire, July 11, 2016).

But Wilson and others who recorded oil field emissions found that workers were still often opening hatches and measuring by hand. When Wilson asked the young oil worker if he had a respirator, he pointed to a monitor he was wearing. She said it appeared to be a hydrogen sulfide monitor (she also wears one). Hydrogen sulfide is a known killer in the oil field, but a monitor that detects it won’t protect a person from toxic gases.

"I told him," Wilson said, "that’s not going to protect you."