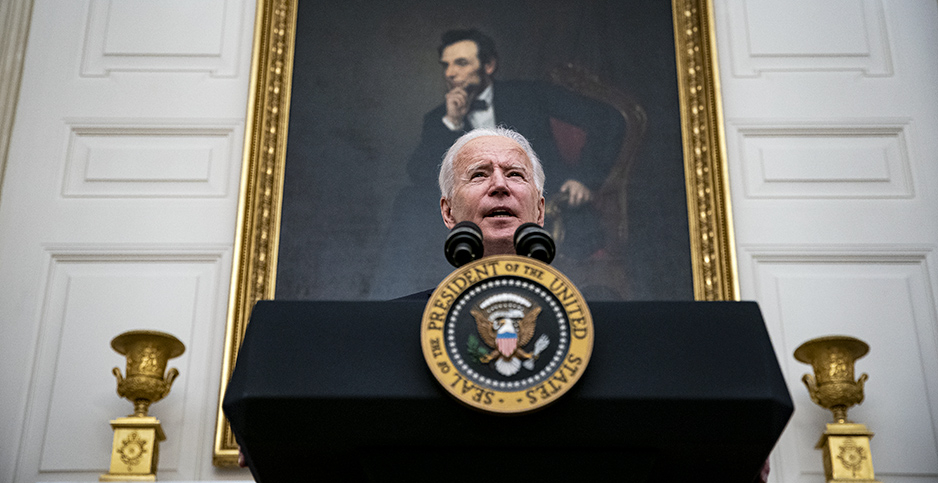 The Biden administration has yet to act on its campaign promise to bar oil and gas leasing and permitting on federal lands, but the political battle has already begun.

Rumors that the Biden administration will announce a one-year oil and gas moratorium this week have marshaled oil-friendly Republicans to a fight reminiscent of the Obama era.

But progressives, too, are galvanized and plan to press for an even more aggressive action to retire the U.S. government’s vast federal mineral estate.

In light of the suite of climate provisions, signed the same day Biden took office — along with the revocation of the Keystone XL pipeline’s permit and rejoining the Paris climate agreement — many saw the administrative order as a shot across the bow. House and Senate Republicans instantly rallied against it.

Sen. John Barrasso (R-Wyo.) questioned the order’s legality and said it was a "disastrous start" for the new president. The ranking member of the Senate Energy and Natural Resources Committee said the interruption of oil and gas lease sales in his state would "kill jobs" and eliminate the influx of revenue.

Other conservatives made clear that they saw the Interior order as a sign of the permanent ban that was still to come.

"This day-one attack on American energy jobs signals an alarming return to the same failed energy policies of the past that inflicted real harm on hardworking families," said House Minority Whip Steve Scalise (R-La.), referencing the fossil fuel fights between the left and right during the Obama era.

A moratorium on oil and gas leasing and permitting is a key component of the Biden administration’s promised climate action.

The president has committed the United States to net-zero carbon emissions by midcentury and said the country must decarbonize the electricity sector by 2035. A temporary pause wouldn’t nearly reach those goals, but it’s a dramatic shift all the same.

Kevin Book, a managing director at research firm ClearView Energy Partners LLC, said the order appeared to be a first step toward the bolder climate agenda.

The research firm had initially read the first-day action of the Biden administration as cautious on the federal oil and gas front.

But that skepticism is waning, he said. Book quoted from Biden’s inaugural address last week: "This is a time for boldness, for there is much to do."

Book added, "Shame on us for not listening better" to that part of the speech.

Congressional Democrats were largely quiet this past week when it came to issuing statements in reaction to the 60-day moratorium specifically, but Sen. Jeff Merkley (D-Ore.), who has sponsored legislation in the past to ban drilling on public lands, signaled Friday that he was encouraged by the action and what it could portend.

"President Biden’s pause on new leases and permits is an important first step and should be made permanent," said Merkley’s spokesman, Ray Zaccaro. "Sen. Merkley is eager to work with the administration … to forever stop future giveaways of federal lands and waters to fossil fuel companies."

Conservatives, however, accused the new administration — which is calling for unity — of stoking tensions and confusion.

Rep. Bruce Westerman of Arkansas, the top Republican on the House Natural Resources Committee, said in an interview with E&E News on Friday that Biden is creating "a huge amount of turmoil" and "uncertainty" in just stopping new leases for 60 days rather than making a clear statement about his long-term intentions — that is, whether this was in fact a precursor to a full ban.

"We’re trying to figure out what it means," Westerman said. "If you look at what the left has said they’re going to do about energy on public lands, it looks to me like they’re taking the first steps to try to implement these policies, and I think they are misguided policies that are not going to do anything to help the environment and drive the economy into the ground."

Rep. Dan Newhouse (R-Wash.), the chairman of the Congressional Western Caucus, agreed. "It is clear we should have taken President Biden and Vice President Harris at their word when they threatened to harm America’s energy dominance on the campaign trail," he said. "In 24 hours, they’ve already taken dangerous steps in doing so."

While this reaction from the GOP is not surprising, the level of rage evoked by even a short-term action indicates the extent of the anxiety and distrust that exist between congressional Republicans and the Biden administration.

It also signals just how deep a divide there is between the two factions on energy policy and how difficult that will be to overcome in the months ahead, especially as Democrats hold out hope for bipartisan agreement on climate legislation or a green infrastructure bill.

"If we want to unify the country and have more civility in politics," said Westerman, "I don’t think this is the right first step to make that happen."

If Biden decides to move forward with instituting a longer-term moratorium on new lease sales on public lands — which could happen as soon as Wednesday, when the administration plans to issue a tranche of new executive orders geared toward the environment — it also could complicate confirmation prospects for Rep. Deb Haaland (D-N.M.) to be the next secretary of the Interior.

Haaland has made no secret about her own views on oil and gas drilling on federal property: She’s against it. But Biden’s aggressive action, this early in his tenure, could give her some unneeded baggage.

In a scenario where Biden waited to announce any sort of drilling ban, Haaland could have claimed plausible deniability in her confirmation hearings, telling senators she would serve at the pleasure of the president and take his lead on what policies to enforce or not.

"I think there is genuine concern about the scrutiny that she’s going to receive from the Republicans in the Senate," said Dallas Goldtooth, the "Keep It in the Ground" campaign organizer for the Indigenous Environmental Network, who is a staunch Haaland supporter.

Also unsurprisingly, the oil and gas sector has reacted strongly in opposition to the temporary order and to the potential of more to come.

"Banning energy development on federal lands and in offshore waters not only threatens thousands of the best-paying jobs but needlessly erases much-needed revenue that helps pay for schools and other essential services," said Todd Staples, president of the Texas Oil and Gas Association.

Similar comments poured out of state and national groups. The National Ocean Industries Association appeared wary but cautiously optimistic that the Biden administration wouldn’t act in a way to harm jobs.

"We understand the Biden administration intends to broadly review federal regulatory programs, and we remain optimistic that this secretarial action will not be used in a way that impacts that 345,000 jobs across the country that are supported by oil and gas production in the Gulf of Mexico," said Erik Milito, president of the association.

The order also prompted pushback from the Ute Indian Tribe of the Uintah and Ouray Reservation. The tribe often advocates for fossil fuels and is highly reliant on its oil and gas activity.

"Your order is a direct attack on our economy, sovereignty, and our right to self-determination. Indian lands are not federal public lands," the tribe wrote in a letter to de la Vega on Thursday demanding that the 60-day order be lifted for tribal lands. "Any action on our lands and interests can only be taken after effective tribal consultation."

Still, Book of ClearView Energy Partners said he’s not sure the political blowback will matter. He considered several ways in which the oil and gas ambitions of this administration could be hampered — by political considerations, congressional leverage or even gasoline prices. And he discarded each one as unlikely.

"Biden can be bold with his executive agenda if a ‘thin blue’ Senate delivers his Cabinet on a party-line basis," he said.

The president’s advisers are largely "green pragmatists" on board with the energy transition. Senate Majority Leader Chuck Schumer (D-N.Y.) appears to be warming to reconciliation to bypass skittish Republicans over Biden’s $1.9 trillion stimulus package and pump prices for gasoline — a historically sensitive issue with voters — aren’t at risk, Book said.

Concerning oil and gas state votes, there simply aren’t that many at risk for Biden. In states that Trump won, fossil fuels made up on average 5.7% of their economic output, Book said.

In states that Biden won, that average falls to 1.4%. New Mexico, which Biden won by just under 100,000 votes, is an exception. The state is the largest oil producer from federal minerals, and the oil and gas industry there represents about 11.5% of its gross domestic product.

"What might check further boldness? Beyond legal challenges, it’s hard to come up with an answer," Book said.

Ultimately, no matter what Biden does, he will likely find himself getting pressure from both ends of the political spectrum.

Goldtooth said a one-year moratorium on issuing new leases would make him "happy, but it’s not enough," saying he wouldn’t be satisfied until the administration puts an end to all leases on oil and gas drilling on public lands, including ones that are already underway.

"That’s a strong, left-plank position," he conceded, "but the science backs it up. We have to see a rapid phaseout of fossil fuel production across the board. We understand that some of those processes need to be done incrementally, but we are strongly urging for those processes to be done quickly."

Evan Weber, political director for the progressive Sunrise Movement, made clear that his group intends to hold the administration’s feet to the fire on fulfilling "one of the loudest promises that Biden made to the climate justice movement on the campaign trail."

"It would be an inexcusable mistake not to follow through on it," Weber said. "This is the baseline of what’s needed to keep fossil fuels in the ground."