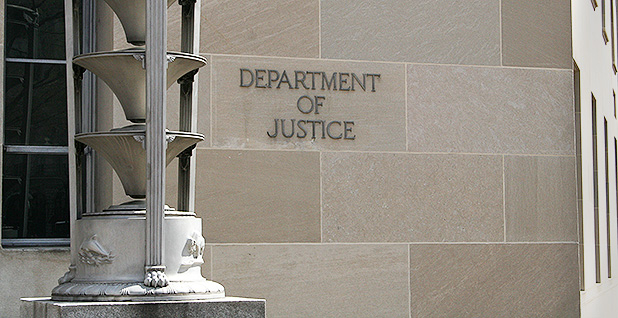 The Justice Department said it has no legal obligation to respond to congressional information requests. Scott/Flickr

The Trump administration has concluded that it has no legal obligation to respond to many congressional information requests, arguing that the constitutional authority to conduct executive branch oversight essentially rests in the hands of the majority party in each chamber.

The administration’s position, detailed in a May 1 legal opinion posted on the Justice Department’s website, follows months of complaints by Democrats on both sides of the Capitol over the slow pace of responses or, in some cases, non-responses to multiple information requests. The ranking Democrats on multiple Senate committees last month raised the issue in a letter to Trump (Greenwire, May 24).

In the opinion sent to the president’s counsel, acting Assistant Attorney General Curtis Gannon of the Office of Legal Counsel argues that Congress’ powers to make "official inquiries into and to conduct investigations of executive branch programs and activities" are limited to each chamber of Congress, which can pass resolutions of inquiry seeking information from the executive branch.

However, Gannon notes that in both chambers, that oversight power is generally delegated to committees, where it rests with the chairman or leaders of subcommittees. Given that Republicans control Congress, the administration’s view appears to justify simply ignoring the many information requests that Democrats have issued to the Trump administration.

Citing past administration legal rulings and case law, Gannon draws a "fundamental distinction between constitutionally authorized oversight and other congressional requests for information."

"When a committee, subcommittee, or chairman exercising delegated oversight authority asks for information from the Executive Branch, that request triggers the ‘implicit constitutional mandate to seek optimal accommodation … of the needs of the conflicting branches,’" he writes, citing a 1977 ruling by the U.S. Court of Appeals for the District of Columbia Circuit.

By contrast: "Individual members of Congress, including ranking minority members, do not have the authority to conduct oversight in the absence of a specific delegation by a full house, committee, or subcommittee," states the opinion.

Still, agencies are not prohibited to respond to lawmakers’ requests by the Justice Department legal opinion. They can respond to those congressional requests at their own choosing, according to the document.

Some agencies have answered Democrats’ letters.

Earlier this month, U.S. EPA Administrator Scott Pruitt responded to a March 17 letter from Senate Democrats on the Environment and Public Works Committee, which asked the agency chief to "correct the record" on his confirmation hearing testimony on his use of private email for work when he was Oklahoma’s attorney general. In his response, Pruitt said he had found that he had used personal email for official business, despite indicating otherwise earlier in his testimony (Greenwire, May 6).

Still, Sen. Tom Carper (D-Del.), the ranking member on the Environment and Public Works Committee, has questioned whether Pruitt has fulfilled the standard pledge that most nominees make at their nomination hearings to respond in a timely fashion to committee inquiries. Carper has suggested that the EPW committee should require that vow to be made under oath, as is standard practice for other panels.

The administration’s position comes as the heads of EPA and the Interior and Energy departments are expected to hit Capitol Hill this month to defend their fiscal 2018 budget requests, which have been roundly condemned by Democrats for their proposed deep cuts — and rebuffed even by some top Republican appropriators.

Democrats will use those public forums to probe the Cabinet officials on a host of controversial policy changes and practices happening within agencies under their jurisdiction.

Interior Secretary Ryan Zinke is scheduled to testify Thursday before the House Interior, Environment and Related Agencies Appropriations Subcommittee, and key members of the Appropriations and authorizing committees have said they expect Pruitt and Energy Secretary Rick Perry to appear, as well, in the coming weeks.

Led by Rep. Frank Pallone (D-N.J.), the ranking member on the House Energy and Commerce Committee, Democrats on the panel yesterday reminded Chairman Greg Walden (R-Ore.) of the tradition of agency heads appearing before the panel to discuss the budget.

"It is paramount that this Committee remain proactive in its efforts to ensure that all eight of these agencies are functioning on behalf of the interests of all Americans," the Democrats wrote, urging Walden to schedule hearings for all of the agencies under the committee’s purview, including DOE and EPA.

"Holding hearings concerning the President’s proposed budget affords this Committee the opportunity to better understand the proposed changes to the budget, the needs of these agencies and the potential impacts on the American public and the country as a whole."